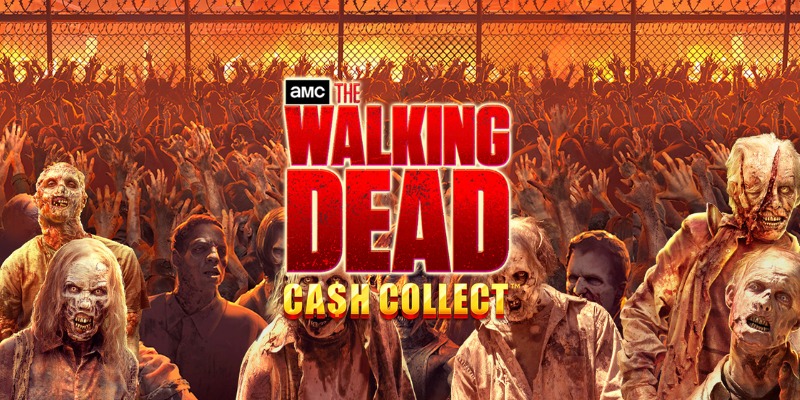 The Walking Dead Cash Collect is a new casino slot from Playtech where we revisit the horrors of one of our generation’s biggest blockbuster series. Time and time again, Playtech proves their ambition and reach by acquiring the rights to use famous characters and titles in their exciting slot games. Not long ago, Playtech teamed up with Roberto Carlos and showcased his career in the form of a game. Together with Playtech, we were given an amazing opportunity to sit down in an interview with the man himself, a moment we will cherish forever. However, Roberto Carlos is not present in this one, which is probably for the better because we wouldn’t want to lose him to zombies. Instead, another set of familiar faces graces the reels. This is the third Walking Dead slot in Playtech’s series, and we will enter this review with high expectations!

The Walking Dead Cash Collect is a video slot from Playtech that features 5 reels, 3 rows, and 30 paylines. The available bet sizes might differ between sites, but from what we have gathered, players can choose between a Min.bet of 0.10 and a Max.bet of 60. Its RTP is set at 95.72%, which is slightly below industry-average, but higher than the previous games in the series. The game is played at high volatility and offers a max win of 15.000x the bet.

Naturally, the game’s design consists of a Walking Dead theme. It takes place in Alexandria, which was a quarantined safe zone near Washington D.C in the series, home to politicians during the outbreak. Playtech has gone the distance by actually making it resemble the village, as those who are familiar will notice by the windmill in the background. Complementing this spooky setting is an even creepier soundtrack. It’s not the original Walking Dead theme song, but it does the series justice.

You can play this game on all common mobile devices and desktops. A winning combination is created by landing 3 or more matching symbols within the game’s 30 paylines, starting from the leftmost reel.

The lower-paying symbols are made up of zombie-infested jacks, queens, kings, and aces. Five-of-a-kind with one of these will pay 1.5x the bet. The higher-paying symbols consist of the following Walking Dead characters: Negan, Michonne, Darryl, Rosita, and Carol. A full line of 5 with one of these will pay 2.5x-6x the bet. A nasty zombie depicts the Wild symbol, which substitutes for all other regular paying symbols. There are also Cash Prize symbols and Free Spins symbols, which trigger by landing a Cash Collect symbol. Let’s dig deeper into the features!

What is the max win in the slot The Walking Dead Cash Collect?

What features are available in the slot The Walking Dead Cash Collect?

Blue squares with numbers act as Free Spins symbols. These are triggered by landing a Cash Collect symbol on the same spin, awarding you the Free Spins feature.

There are two different Cash Prize symbols; coins and diamonds. The coins show a set value, and the diamonds award one of the following four jackpots:

You will collect these by landing a Cash Collect symbol.

Cash Collect symbols will stay on the reels during 3 spins.

Cash Collect symbols will move 1 position to the left with each spin until they are knocked out from the reels.

This feature has the highest potential. Cash Collect symbols will move 1 position down with each spin. Multiplier symbols are added to the reels and can net you up to 15x the win.

We came into this with high hopes that Playtech’s developers had outdone themselves, and they had. We enjoyed the previous Walking Dead slots as well, but this is levels above. We’ve made some complaints previously that some Playtech games have very few features, and this is the complete opposite. Although the game strongly focuses on its core feature (Cash Collect), there are many facets to it, resulting in a versatile game that will keep you entertained for a long time.

Lately, the industry has shifted a lot from one-feature games to players wanting more mechanics. An example of this is Nolimit City and the Super Bonuses that they offer. The Walking Dead Cash Collect might not offer any Bonus Buys, but the Danger Zone Free Games certainly feel like a Super Bonus. Thus, this becomes something you strive for and want to experience, making this a game you want to keep on playing. The problem with Super Bonuses is that they risk putting a dampening effect on the normal ones. Therefore, it’s crucial to balance the features and make them all count. We feel like Playtech has managed to do that. All versions of the Free Spins feel rewarding, so kudos to that!

Gameplay and mechanics are usually top-priority for us when we review games, but in situations like these, it’s equally important that the provider does the theme justice. Playtech made a smart move by adding Alexandria as the background. It’s a village that all Walking Dead fans will recognize, which maintains the integrity of the game. We wish that the original Walking Dead theme song would’ve played in our ears, but we will also admit that the one used is equally horrifying. Graphically, the game isn’t super strong. However, the most vital part is that the show's beloved characters are present and that this is an engaging experience.

The Walking Dead Cash Collect by Playtech is a thrilling game and a must-play for any fan of the show, or any fan of slots, for that matter.