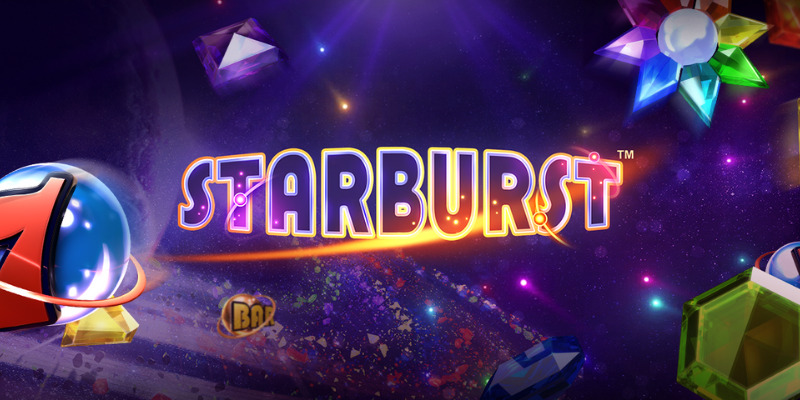 Starburst is a classic casino slot from NetEnt on a classic 5X3 grid with shining gems and a rainbow-colored wild star expanding over the reel and triggering respins. The paylines also pay both ways, meaning you can make wins starting from the leftmost or rightmost reel. Starburst was released in 2012, and ten years later, it’s still one of the most played casino slots. To tell the truth, it’s pretty simple, but that might also be the reason why players can’t have enough of it. Let’s go to space and explore this game in depth.

Starburst is a video slot from NetEnt with 5 reels, 3 rows, and 10 paylines. The player can choose to bet between the Min.bet 0.10 and the Max.bet 100. NetEnt lets the online casinos choose their own RTP between 90.05%-99.06%, with the standard being 96.09%. Starburst has low volatility, and the max win is 500X the bet. Players hit a win a little more often than on every fifth spin, with the hit frequency of 22.6%.

The tricks to take home the riches of space are rather few. You will shortly get to know the game’s features Two Way Paylines, Wild Symbol, and Respins.

We are floating around in space, looking at graphics that were state of the art when Starburst was released in 2012. On the left bottom is part of a sphere with some light on it. It might be a piece of earth where the citizens wake up to a new day when the first sunbeams hit the planet. Above are some glowing stars floating around in space. The game is put on top of this scenery with transparent reels. To the sides of the reels are numbers going from 1-10, representing the game’s 10 paylines. To make a win, you’ll need to land at least 3 of the same symbols on any of the paylines. The winning combination can either be made from left to right, starting with the first reel to the left, or from right to left, starting with the first reel to the right. You can spin the reels of Starburst on all devices: desktop, notepad, and mobile phone.

There are only 8 symbols in total in this space journey. The lower-paying ones are gemstones in different shapes and colors. The purple, blue, orange, green, and yellow gemstones pay between 0.5X-1X the bet for landing 3, and 2.5X to 6X the bet for a combination in all 5 positions. Starburst has some classic casino symbols too, with 7 and BAR paying 2.5X-5X the bet for 3 and 12X-25X for a complete win line. The wild symbol substitutes all other symbols and triggers the respin feature.

What is the max win in the slot Starburst?

What features are available in the slot Starburst?

The features are Two Way Paylines, Wild Symbol, and Respins.

The rainbow-colored star is the Wild Symbol, substituting all the other 7 symbols. It can land on reels 2, 3, and 4, and whenever it lands, it spreads out to cover all 3 positions on its reel. It also activates the Respins on landing.

This is the grand feature of Starburst, and the closest you’re going to get a free spins session. Whenever a Wild Symbol lands, it spreads out to cover the reel completely. The wild symbols are locked in place while all other reels spin again. If a new wild symbol hits one of the reels, it will also take over the reel completely and lock itself in place while the other reels spin again. The maximum number of respins is 3.

NetEnt is a massive game provider and a big player in the slot world. The company has created epic games based on TV-shows, movies, and video games. Some of them are Vikings, based on the TV-series, Jumanji, based on the film with Robin Williams, Scarface, based on the iconic cult movie starring Al Pachino, and Street Fighter II: The World Warrior, giving the player the full story of the increasingly popular video game. Other games from NetEnt are more basic, but it seems like the game provider usually manages to create a product that attracts the players. Starburst is a great example of that. To be honest, the game is really simple, but it’s probably also the simplicity that attracts the crowds. Everyone from complete beginners to serious players comes back to play this game over and over.

The respins feature is what the players want to hit, and it’s actually quite frequent since it activates as soon as a wild symbol lands. There are, in general, a good number of wins in Starburst, considering the hit frequency of 22.6%, although many wins are less than the stake. The graphics are a joy for the eye, still impressive ten years after the game was released. The fact that the game has low volatility also makes it perfect for beginners because the stake doesn’t move up or down too rapidly. The downside of the low volatility is that you’re not going to hit any insane winning combination since the max win is 500X the bet. Lastly, make sure that you check the RTP of Sunburst on your online casino before you start spinning since versions range between 90.05% to 99.06%. The game’s original RTP of 96.09% is about average for a video slot.

Starburst from NetEnt is a game taking place in space with wild symbols turning themself into stacks, activating respins.