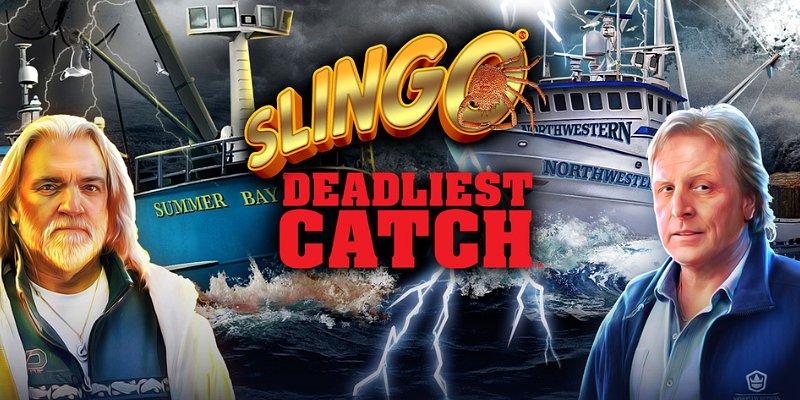 Slingo Deadliest Catch is a new casino slot from Slingo Originals where we follow Sigurd ’Sig’ Hansen and Wild Bill Wichrowski from the tv-show Deadliest Catch. The documentary portrays the lives of Alaskan crab fishermen, where Sig has been a boat’s captain since 2005. Wild Bill is also the captain of another fishing boat, and the player gets to choose which one to play in the bonus games.

Slingo is a wordplay of slot and bingo, with one row spinning the numbers and the other ones acting as a bingo ticket. Filling up the paylines with crabs will get you one of the three crab fishing bonus games that are available in both day and night versions. We probably don’t have to tell you that the night version is more dangerous, but it can also result in bigger catches. Are you ready to face the roaring seas?

Slingo Deadliest Catch is a video slot from Slingo Originals with 5 reels, 5 rows, and 12 paylines. The Min.bet is 0.2, and the Max.bet is 10. You hang out on open waters with an RTP of 95.7% and medium volatility. The most successful crab fishing excursion can bring the max win of 3740X the bet.

There’s probably no surprise to anyone that Slingo Deadliest Catch takes place on the cold Alaskan sea. The lower part of the screen is covered in dark water, and to the left is part of a boat and an anchor. The reels are placed in the middle with numbers in a 5x5 grid and an extra horizontal reel beneath. The grid looks just like a bingo ticket, with random numbers between 1-15 on the first reel, 16-30 on the second, and so on. After placing a bet and punching the spin button, the extra bottom reel will spin and show a number or a special symbol under each respective reel. The player has 11 spins, and the objective is to land as many as possible of the bingo ticket numbers on the bottom reel.

If a number on the bottom reel matches a number on the bingo ticket, that number will be marked with a crab on the ticket. Marking 5 numbers in a row on any of the 12 paylines will result in a Slingo Win. The game finishes when the spins are over, and it might reward the player with a cash prize or a bonus game depending on the number of Slingo wins.

What is the max win in the slot Slingo Deadliest Catch?

What features are available in the slot Slingo Deadliest Catch?

Whenever a crab lands, it is collected on a meter to the right. If one of the Bonus Games is triggered, every collected crab awards an extra turn.

The Wild Symbol is a ship’s wheel. When it lands, it lets the player choose which number to mark on the reel above it. Landing 3, 4, or 5 Wilds and/or Super Wilds awards 1X, 3X, and 50X the bet.

The Super Wilds Symbol also lets the player pick a number to cross out. The number doesn’t have to be on the same reel but can be any number on the ticket. Landing 3, 4, or 5 Wilds and/or Super Wilds awards 1X, 3X, and 50X the bet.

The Free Spins Symbol in an anchor. It gives the player an extra spin on the number reel.

When your spins are over, you can choose to buy an extra spin or collect any present win. The price of an extra spin becomes higher the more Slingo Wins you have made. Each extra spin that you buy has a theoretical RTP of 95.67%.

The regular Crab Grab Bonus Game is awarded when finishing 6 Slingo wins, and the night version kicks in after finishing 9 Slingo wins. You get to pick which boat to take, and the feature grants you 4 picks plus an extra pick for every bonus crab you have collected up to a maximum of 16 in the daytime and 12 in the nighttime. You get to pick green buoys that award between 0.2X and 5X in the day game and 1X to 50X in the night game. If you’re lucky, you pick the Level Up star that raises the wins to 1X-25X in the day game and 5X-100X in the night game.

The daytime Crab Fishing Bonus Game is triggered when completing 7 Slingo wins, and the nighttime version is activated by 10 Slingo wins. Both versions start with 5 spins and an extra spin for every bonus crab up to the maximum of 17. The player chooses either the North Western or Summer Bay ship and sets out to sea. Each spin represents a stop on the route, paying between 0.1X and 2.5X in daytime. At night, every step pays between 1X and 30X the bet.

While you’re sailing the seas, crab and storm symbols move around on the map. If your ship moves over a crab, you will catch more crabs. If the ship moves into a storm, your so far winnings will be multiplied by 2 or 3. The multiplier is not applied to winnings after it’s awarded.

The Crab Hunt Bonus Game starts with 7 picks plus an additional pick for every crab collected up to the maximum number of 19. You get to pick squares on a 7x7 sonar screen. Each square has a crab win worth between 1X and 20X the bet in the daytime and 5X to 500X in the nighttime. The sonar will reveal all the crabs you missed when you have used all your picks.

Slingo Deadliest Catch is a breathtaking crab fishing adventure mixing a casino slot with a bingo game. When starting the game, a tranquil sea sound with some birds welcomes you. As soon as you hit the spin button, a rock song comes on, and you’ll realize that the trip on the seas will be a bumpy ride. You get at least 11 spins on the number reel and more if you land Free Spin Symbols. This means that a game round takes longer than in a regular casino slot. Most people will probably appreciate it since it’s exciting to see the numbers being revealed and crossed off from the bingo ticket.

Once your spins are over, you can chip in for an extra spin if you think you’ll have the chance to land a better win. This is a great feature, but just be aware that spins can become expensive if you keep buying new ones. The price of them also goes up the more Slingo wins you have achieved.

The game developer has done a great job producing 3 Bonus Games that all come in two versions. Pretty much the only thing that differentiates the versions is that nighttime fishing is way more lucrative. We could have wished for some more differences, at least some changes in the graphics. All in all, this is a game that will attract many more players than just fans of the tv-show. If you’re in search of other games based on tv-shows and movies, you shouldn’t miss Vikings, Jumanji, or Creature from the Black Lagoon.

Slingo Deadliest Catch from Slingo is an innovative game mixing a casino slot with bingo, featuring the brave crab fishermen from the tv-show of the same name.