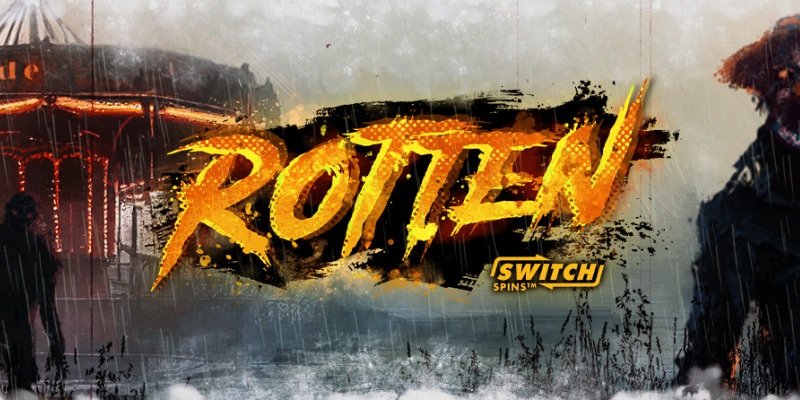 Rotten is a new casino slot from Hacksaw Gaming in which we go to a fair that’s been overrun by terrifying zombies. It’s not a hot take to assume that Hacksaw was inspired by The Walking Dead when creating this game. After all, the blockbuster series made zombies part of pop culture. However, the modern conception of zombies dates back to 1968 and the movie Night of the Living Dead, so Robert Kirkman and Tony Moore, who wrote the Walking Dead comic book series, can’t take all the credit. Rotten is not the first zombie-themed slot, however. Earlier this winter, we had the pleasure of having Playtech on our stream to showcase its new game, The Walking Dead Cash Collect, which was the studio's third game with an official Walking Dead theme. Rotten seems to be a much different game, though, so let’s see if it does this cool setting justice!

Rotten is a video slot from Hacksaw Gaming that features 6 reels, 5 rows, and 35 paylines. Players can choose between a Min.bet of 0.10 and a Max.bet of 100, making this game viable for pretty much any bankroll. Rotten is played at an RTP of 96.27%, placing it slightly above the industry average. The game is played at high volatility and offers a max win of 10.000x the bet.

The game’s design features a zombie theme and takes place at an abandoned fair. By the looks of it, it’s been deserted for quite some time, at least by humans. Because this is not one of those stories about the kid getting to spend an entire day at the fair all alone, skipping queues and enjoying rides for free, oh no, this zombie-infested setting is not for kids. Apart from the ones on the reels, three zombies can be spotted, seemingly approaching us. Thankfully, they seem to be stationary for now, giving you time to enjoy this thrilling game. For an even more enthralling experience, we advise you to turn the sound on, giving off a spooky vibe.

Rotten can be played on all common mobile devices and desktops. A winning combination is created by landing 3 or more matching symbols on consecutive reels within the game’s lines, starting from the leftmost reel.

What is the max win in the slot Rotten?

What features are available in the slot Rotten?

The Wild symbol enables more winning combinations by substituting for other paying symbols.

Switchspins are activated when you land a Switch Scatter symbol. This awards 1-10 respins where random symbols are replaced with either the highest-paying symbol or the Wild symbol. If an additional Switch symbol is landed during this feature, more symbols will be replaced and additional re-spins awarded. In the top right corner of the grid, you can see the remaining spins and which symbols have been replaced.

Landing 3 or more Mad Scientist Scatter symbols awards 10 Free Spins in the bonus game. In this bonus, there is a higher chance of landing Switch symbols and triggering the Switchspins feature. Landing 3 Total Takeover Scatter symbols on the same spin in this feature triggers the Total Takeover Bonus Game at the end of the current spin and resets the number of remaining Free Spins to 10.

The Total Takeover is sort of a super bonus. You’ll start with 10 spins and have a higher chance of landing Switch symbols. All replaced symbols are saved progressively, meaning they do not reset after each Switchspins set is completed. Thus, collecting all of them will fill the screen completely with either the highest-paying symbol or Wild symbol. Landing 3 Total Takeover symbols will award an additional 4 Free Spins.

If you want to jump straight into one of the Bonus Games or increase your odds of triggering them, you have 4 different options with various costs:

3x(active) = Each spin is 5 times more likely to trigger a Bonus Game.

20x(active) = Each spin guarantees that a Switch symbol lands.

When Hacksaw was founded, the company focused on creating online scratch cards. But since switching its focus to slot games, Hacksaw has rapidly become one of the most popular and promising providers in the iGaming industry. However, they’ve kept true to their origin. The games look influenced by scratch cards, which might not sound super appealing, but we really dig the design. Rotten follows this trend with its unique graphics and animations, resulting in a game that experienced players will recognize as a Hacksaw product without knowing it. We believe that creating unique and recognizable slots is more important than anything else, and Hacksaw is at the forefront of that metric.

Nonetheless, innovative gameplay is also essential, but Hacksaw scores high when it comes to that as well. Replacing symbols is a feature that’s been present in many games, but we can’t remember it being interpreted like it is in Rotten. A thoroughly analyzing eye will spot that all features focus on a single-core mechanic, which is Switchspins. You could argue that it’s a bit misleading seeing plenty of different features and bonus buys when they all have the same end goal, but we choose to look at it differently. Opposite to that, we like how Hacksaw has managed to create many different aspects of the game while still being heavily focused on one mechanic.

Rotten has an above-average RTP, a solid max win, a thrilling environment, and engaging gameplay; we can’t ask for much more!

Rotten by Hacksaw takes players to a zombie-infested fair where the brave will get to enjoy exciting features while fighting off these horrifying creatures!