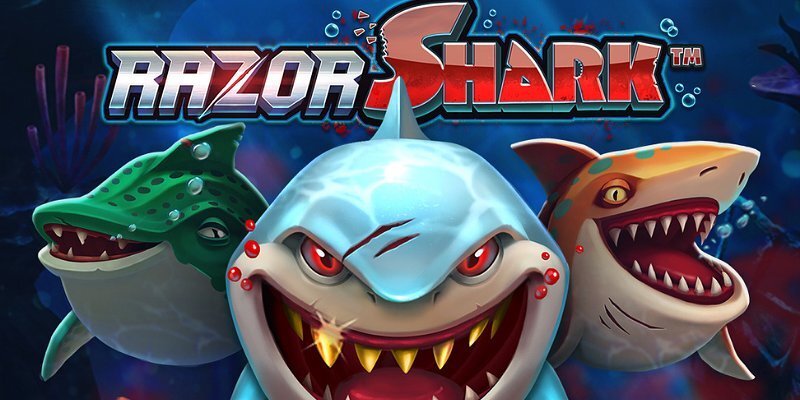 Razor Shark is a classic casino slot from Push Gaming, inviting all players to swim in dangerous waters with fierce white sharks. The game provider first reported that this underwater adventure has a max win of 50000X, but a lucky Swedish player has made an even bigger win on 85475X the bet, paying over €400000 on a €5 bet. The money machine of this game is the free spins session that theoretically can go on forever. Get your scuba gear and come with us for a highly volatile swim.

Razor Shark is a video slot from Push Gaming with 5 reels, 4 rows, and 20 paylines. The Min.bet is 0.10 and the Max.bet is 100. This marine escapade is highly volatile and has an RTP of 96.70% by default. Be aware that the game provider offers the casinos 3 other versions with lower RTP, down to 90.52%. The max win has no theoretical boundaries, and the highest reported win is 85475X the bet, won on a 9-minute free spins session.

The free spins are the way to the biggest fortunes, but there are several other helpful tools in this adventure too. The features are Bonus Symbol, Scatter Symbol, Mystery Stacks, Razor Reveal, Bet Multipliers, Scatters, and Free Games.

When starting this game, the player is taken straight into the ocean with corals, sea stars, and small fish swimming around the grid. The water has a shifting blue color like the sun was shining from above spreading light. You will also see clownfish, a white and orange fish that became very popular in the Disney movie Finding Nemo. This game looks perfect, and you can tell that Push Gaming has worked a lot with the graphics and the music. Sometimes, like when you’re close to landing the free spins, there’s a tune sounding a lot like the thrilling music in the classic shark movie Jaws. The different symbols are also well made with great detail in this modern slot with a classical, easy-to-understand 5X4-grid. To make a win, you’ll have to land at least three of the same symbols on any of the 20 paylines going from left to right, starting with the first reel to the left. You can play the game on desktops, notepads, and mobile phones.

Let’s look at what you can encounter in the deep waters of Razor Shark. The lower-paying symbols are oxygen tube, flippers, diving mask, and underwater camera. They all pay the same, 0.10X for landing 3, and 2.50X the bet for landing 5. The higher-paying symbols are 4 different sharks in blue, green, pink, and orange. These guys pay between 5X and 25X if you land 5. The great white shark is the game’s Wild Symbol, substituting all paying symbols. The wild shark is also the most valuable symbol, paying 50X the bet for landing 5. Apart from the paying symbols are the Scatter Symbol, depicted by a yellow sea mine saying Bonus. You need 3 sea mines anywhere on the grid to activate the Free Games. There’s also a black sea mine saying +1 that might turn up if 3 of the bonus mines already are on the grid.

What is the max win in the slot Razor Shark?

You can win an infinite number, and the highest recorded win is 85475X the bet.

What features are available in the slot Razor Shark?

The great white shark is looking right at you with his mouth wide open. He might for sure be intimidating, but remember that he’s your best friend, substituting for all the paying symbols. He’s also valuable on his own, making up to 50X wins in the base game.

The explosive sea mine is what you need to activate the Free Games. Collect 3 sea mines anywhere on the grid, and it will activate the free spins with an explosion. There’s a chance to land extra scatters in the Razor Reveal feature. They are black saying +1, nudging up the Mystery Stacks in the free spins, giving you an extra spin.

The Mystery Stacks are 4 seaweed symbols landing anywhere on a reel. When the reels stop, the mystery stacks open and reveal what’s behind the seaweed. It can be either paying symbols or Golden Shark symbols. If the stack contains paying symbols, they are all of the same kind. If there are several mystery stacks on the grid with paying symbols, all grids contain the same symbol. After paying any potential wins, the Mystery Stacks nudge down 1 position on the reel for the next spin, continuing until the stacks aren’t visible. If the mystery stacks contain Golden Shark symbols, you have activated the Razor Reveal.

This feature kicks in when you land Golden Shark symbols in your Mystery Stacks. The shark symbol will disappear, turning the Mystery Symbols into mini reels that either award the player Instant Bet Multipliers or Scatter Symbols. The Instant Bet Multiplier has a value anywhere between 1X and 2500X, and all the multipliers are added together before being multiplied with your bet. Let’s say that you land 3 multipliers with the numbers 2, 4, and 8; then your win will be 14X the bet (2+4+8=14). If the Razor Reveal brings you any Scatter Symbol, it will be counted with other scatter symbols on the reels. If you have 3 scatter symbols in total, you’ll be awarded the Free Games. Any scatter symbol landing after you already have collected 3 will be black, nudging up the Mystery Stacks one position in the free spins.

First of all, you’ll need 3 Scatter Symbols to enter the free games. Once you have started the feature, you can kick back and hopefully scope in a big win with the feature’s constant growing multiplier. The Free Games starts with two Mystery Stacks landing on reels 2 and 4. They move one step down on the reels after the wins are counted, just as in the main game. The free spins feature goes on as long as there’s some piece of a Mystery Stack somewhere on the grid – so there’s no counter telling you the number of remaining spins. There’s another counter, though, placed on a blue surfboard to the right of the reels. It is the Free Game’s multiplier, starting at 1X, adding up by +1 after every spin. All wins in this feature are multiplied by the current number of the multiplier before being paid out.

Since the feature starts with reels 2 and 4 filled by mystery stacks, you’re guaranteed at least 5 spins because that’s what it takes for them to leave the grid. You can land new Mystery Stacks while spinning, and the feature can theoretically go on forever. The recorded max win in this feature is 85475X the bet. It was won by a Swedish player who collected over €400000 on a €5 bet during a 9-minute free spins session.

This is a highly volatile game where a lot can happen. An excellent turnout in the free games is what everyone is hoping for, but there are chances for big wins in the base game too. The high volatility makes the game unpredictable, and you might also end up with nothing in the free spins, just to make a big win in the base game a few spins later. You can, for example, land a 2500X win on the Razor Reveal – golden sharks are just too kind sometimes.

It is a pleasure playing this game with its sharp graphics and entertaining features. If you like slots where a lot is going on but think that cluster games with a thousand ways to win are hard to follow, then this is the game for you. Push Gaming shows that you can make an advanced and entertaining game that is still easy to follow with 20 straightforward paylines.

The Mystery Stacks definitely get the players’ attention, bringing some extra excitement when they unfold what’s buried in the seaweed. This underwater story is, in total, a very exciting, good-looking game. Although it has high volatility, it can attract beginners with a minimum bet of 0.10. More adventurous players can put up to 100 at stake. The RTP of 96.70% is also awesome, placing Razor Shark as one of the video slots with the best RTP. Just make sure that your online casino has the version with the high RTP since Push Gaming offers this game with 4 different RTPs, going all the way down to a horrible 90.52%. We also have to mention the recorded max win of 85475X once again, and with such potential, it’s hard not to love this game.

Razor Shark from Push Gaming is a beautiful underwater adventure with excellent graphics where the free spins can deliver extremely high payouts.