Scroll down to start learning, and become an online gambling expert!
← BACK TO ALL COURSES 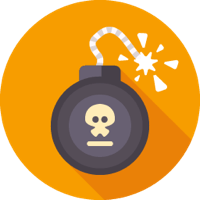 In a casino setting, the term volatility just refers to the possibility of losing or winning a particular game. The term describes how much or how often players should expect to win during a session of play. How volatile a slot is, depends on the algorithm used to design the game and its randomness as well. Some games can have long dry spells and occasionally a big win. Others may have many big wins for a short period. These are what we know as highly volatile slots. On the other hand, low volatile slots give out many wins that are much smaller in value, overall. Another factor that influences the volatility of a slot is the Return to Player (RTP) percentage. It can also help players determine which game is the best to play and win. Random Number Generators (RNG), power new games, which is vital in aiding the casino in winning against players, a phenomenon named the house edge. When we talk of an RTP of 95% for example, it means that for every dollar spent on the game 0.05 is returned to the casino. The RTP of games can vary with some having RTP's from as low as 85%, and some go up as high as 97%.

There is no obvious method of determining volatility in the casino games. However, by utilising a combination of a few of the characteristics attached to it, and combining them with a Mathematical Approach, yields a precise degree of predictability, which underlines the game's probability as a margin of error in Statistics called Standard Deviation. Every machine is mathematically considered to have a margin of error that prevents it from achieving an optimum efficiency of 100%. In brick and mortar casinos, it is somewhat arguable that this explanation is in the right context because of the physical nature of the machines. In this digital age, it's puzzling, to comprehend volatility, because the machines are programs. The game is a software written using an algorithm that commands random outcomes in the event it is played, thereby eliminating bias. The Return to Player ratio (RTP) represents the probability of winning. However, to achieve this figure, tests have to be carried out where the gameplay is an absolute number of times and the results recorded. These values are utilised in the formula when calculating Standard Deviation, which means that if the answer is a small value, so is the house edge percentage, culminating in a low volatile game, and vice versa is true.

The Two Sides of Volatility

There are two sides of volatility in slots. They are categorised as high and low volatility. The risk and how volatile slots are, go hand in hand. It means that the more highly volatile a slot is, the higher the risk the slot and the same is true to low-volatility slots, they have lower risks. High-volatility slots are perfect when players have a lot of money and time on their hands. You might also have to practice the virtue of patience if you want to walk away with a big win. Book of Ra by Novomatic is one such example of a high-volatility slot. As mentioned before, low-volatility slots equate to lower risks. It means that you will not lose as much time and money while pursuing a win. The wins, however, in these kinds of slots are much lower when compared to the games that are on the other side of the spectrum.

Some Examples of Volatile Games

The games' volatility or variance as it is common in some circles is a major determinant on how much money the players pocket. The more variant games require more time while fewer variant games accrue wins in short periods of time. Here, we look at some of the volatile games online. One of the online video slots notoriously renowned for its high volatility is the Gonzo's Quest slot. It is one of the most famous games found in many casinos with its Eldorado theme in crisp 3D graphics. It has an Avalanche feature whereby, if there is a winning pay line, all its blocks crumble, and each one that is above them falls. Subsequently, more symbol blocks fall to occupy these empty spaces, with a win multiplier ranging from 2X to 5X. Even better is that the multiplier increases up to 15X under the Free Spins Bonus feature. Such impressive returns warrant it to be a highly volatile slot. Another slot with a high volatility is the Piggy Riches slot with its 15 pay lines. By landing three or more Lady-Pig Scatters, the Free Spins Bonus feature activates. What is more is that they trigger the Multiplier which is highest paying while at X6. More Scatters appearing in the Free-Spin-round trigger more of them thus increasing the total number Free Spins cumulatively. All these features contribute to a high possibility of winning the maximum amount which is a jackpot of 2,000 coins. Adding the fact that players can win as many as 28 Free Spins gives a reason as to why the slot is highly volatile indeed.

Understanding volatility makes players appreciate that there are games whose wins are slow to come about and that a lot of patience and funds are essential in mounting a challenge to cash-in. Below we dissect these methods to find out better how to play volatile games and win the large amounts.

The first notable thing a player should do is to identify volatile games. By looking out for games with huge payouts and massive jackpots, a player realises that it has a high volatility. These games bring us to the second strategy, which is to have a significant amount of money. A copious sum of money is wagered albeit in small amounts many times over in a bid to win a huge payout. In some games, players can make multiple bets simultaneously, such as Craps. Most would say this method requires patience, because of the manner of wagering where many bets are placed before winning. The third strategy in playing games with high volatility is to aim for small but frequent wins while anticipating few but heavy losses. One such move is the lay bet where a player wagers that a seven will appear before either of the point numbers such as 4, 5, 6, 8, 9, or 10. In this case, it is a favourable bet because seven comes before and after three digits, which makes it an even chanced bet. There is a lot of risks here yet very little money to be won. Players need funds to cover the losses which aren't sensible.

Volatility is not an easy topic of discussion because it is entangled in probability theories. As we have seen, the Mathematical side of the story is embedded in Statistics where the Volatility formula is a Standard Deviation formula. By creating a relationship between the two, Mathematicians can create a link that explains the games' volatile nature a bit further while predicting just how often one is capable of winning after a specified duration of time. Understanding volatility requires players to find further research online. Among the important explanations of volatile games is the Mathematical approach that uses Standard Deviation. It is defined as a distortion of expected outcome or the reason nothing ever operates at 100% optimum efficiency. The expectation is therefore termed as a loss as per the game's (RTP) Return to Player ratio. It is however not possible, therefore, to achieve the desired expectation. It's true particularly in the short-term, leading to players gambling for lengthy times, thus the volatility of the game. After calculating the Standard Deviation, the outcome figure arrived at is called the Luck Factor. It is the quantified value of luck that a player can score while gaming. The figure is often high often explaining why there are few wins in between play. It is, however, not possible to find the exact value and thus they are quantified in ranges.

A perfect strategy imposed on the game reduces the dealer advantage to around 0.5%. There are various strategies that players employ to minimise the house edge, such as, doubling down, where they have the option of having their initial stake and handing it to the dealer while they get to keep the rest. Passing on such an opportunity can have effects such as winning all or nothing, thereby underlining its status as a game with high volatility.

Volatility is expertly dissected and analysed on AboutSlots to give an overall verdict on the ups and downs of the trait. At the end of the day, it is the outcome of a casino visit that matters. Players strive to make money while gambling but gaming factors such as volatility, which is beyond their control impact the final result in both a potentially positive or negative one. Here on AboutSlots, we incorporate a few examples that create a scenario of how the volatile games behave and a simple strategy or two which assist in breaking past this obstacle. Each avid gamer should take the thoroughly researched information into context and apply it to the everyday gaming activities where there is potentially a game changer that can influence massive wins. Additionally, every player should visit AboutSlots and expand their knowledge on other games by reading our dedicated segment.

18
Min
If you want a shot at big money, then your game needs to be a high variance. Click here to learn more...
← Back
Start Next Lesson →