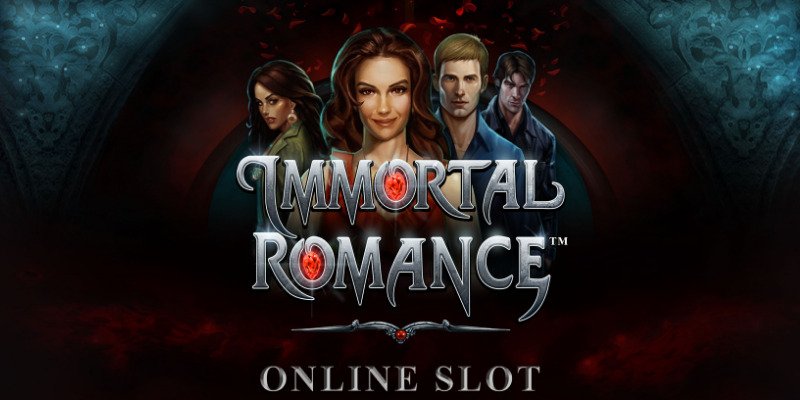 Immortal Romance is a classic casino slot from Microgaming that was first released in December 2011 and remastered in May 2020. The look and story are still the same as when it was first released, now with enhanced animations, improved audio, and feature upgrades. The game is a love story featuring the vampires Troy and Michael, the human heroine Sarah, and her friend Amber who has supernatural powers. All 4 characters have their own Free Spin feature in the Chambers of Spins, where you can score the highest win of 12150X the bet. Immortal Romance also has the randomly triggered Wild Desire feature, where things can become very hot, turning all the reels wild will get you 1500X the bet.

Immortal Romance is a video slot from Microgaming containing 5 reels and 3 rows. You can win on any of 243 paylines with the Min.bet of 0.30 and Max.bet of 30. Immortal Romance is a risky game with very high volatility and an RTP of 96.86%. The lucky player can score the max win of 12150X the bet.

The Chambers of Spins feature contains 4 different free spin options based on the game’s main characters. Other features are the Wild Desire, Wild Symbol, and Scatter Symbol.

This is a complicated love story with the human scientist Sarah falling in love with the vampire Michael, a professor of genetics. Sarah is convinced that aging is a disease of the blood and that it can be cured. She convinces Michael to let her study his blood – without knowing that he is an 800-year-old immortal. The story gets even more complicated when the vampire playboy Troy comes along. He uses his charm with nothing but bad intentions, but he is also loyal to Michael, who saved him from a cruel death about a century ago. The fourth character of this story is Sarah’s friend Amber. She has a gift enabling her to see the past and future of those she touches, and she’s greatly concerned about her friend dating a vampire.

The graphics in this casino slot are great, especially after the upgrades made during the remastering to HTML5 in 2020. Immortal Romance does now come with autoplay and quick spin. The animations in the different features have also been improved into realistic-looking videos. Immortal Romance already had some innovative music when it was released. It now has an updated soundtrack with one theme song to each of the 4 free spins features customized to the main characters. The music in the main game is mystical and slow. The reels make some noise while they spin, and the scatter symbol makes a loud bang every time it hits the grid. This game can be played on desktops, notepads, and mobiles. You create a winning combination by landing 3 or more of the same symbol type on adjacent reels, starting with the first one to the left.

Immortal Romance contains 14 different symbol types with a wide difference in value. There are six lower-paying symbols taken from a card deck: 9, 10, J, Q, K, and A. They pay between 3.33X and 5X the bet if you land them on all 5 reels. The more valuable symbols are spellbook, haunted castle, Amber, Troy, Michael, and Sarah. Those symbols will get you between 8.33X and 16.67X the bet if you get 5 of them. There’s also a Wild symbol, substituting all other symbols except the Scatter symbol. The wild symbol, depicted with a logo of the game’s name, doubles the win of any combination it is part of. The scatter symbol, represented by a lion door knocker, is what you need to activate the Chambers of Spins feature. Landing 5 wild symbols awards you 50X the bet, and 5 of the scatter symbols will multiply your bet 200 times.

What is the max win in the slot Immortal Romance?

What features are available in the slot Immortal Romance?

The features are Wild Symbol, Wild Desire, Scatter Symbol, and Chambers of Spins.

The wild symbol substitutes all other symbols except the scatter symbol. This symbol also doubles the win of any combination that it is part of.

The Wild Desire feature is as unpredictable as a love story between humans and vampires. It is activated randomly in the base game, turning 1 or more reels completely wild and turning the game’s name on top of the slot into “Wild Desire” in blood-red letters. If all the reels turn wild, you are awarded 1500X the bet. Only in the Chambers of Spins can you make a bigger win than that.

The scatter symbol isn’t only just the best paying symbol; it is also what you need to activate the Chambers of Spins. Land at least 3 scatter symbols anywhere on the reels, and you have started the free spins feature that we’re all aiming for.

The Chambers of Spins

This is actually 4 different free spins features packed in one. Each of the game’s characters has their own free spins session with their own soundtrack. The first time you end up here, you must choose the feature of Amber. She will give you 10 free spins with a 5X multiplier. To get to the next session, the feature of Troy, you’ll have to enter the Chamber of Spins at least 5 times. Troy awards you 15 free spins and Vampire Bats symbols that turn into 2X and 3X multipliers. The music has shifted from Amber’s pop song to Troy’s rock n roll in this feature. When you enter the Chamber of Spins for the tenth time, you’ll be able to play Michael’s 20 free spins. While you’re spinning, any consecutive wins will increase the multiplier value from 2X-5X. Finally, when you have entered the chambers for the fifteenth time, you can take on the feature of Sarah. It awards you 25 free spins and a Wild Vine Feature. The wild vine randomly lands on the third reel, most of the time grabbing the surrounding positions on the reel, turning them wild too. Sometimes it turns symbols on other reels into wilds as well.

The story of Immortal Romance reminds us of a video game, opening new features while we are playing. Although the base game and the smaller features are entertaining, it’s the 4 free spins features in the Chambers of Spins that all players want to activate. Not only does it make you want to play for a long time, but the game also rewards long-time players since you must activate the free spins features 15 times to get to play Sarah’s feature. That gives an extra feeling of accomplishment to everyone who makes it all the way. It does most probably result in several big wins on the way too. The 4 characters of this story come to life during the game, and there’s quite a big range of symbol types to get to know. The great graphics also help create the feeling of a video game when we follow the characters of this love story.

Considering the game’s very high volatility, the player may quickly win or lose his money. There’s a surprisingly high RTP, though, paying back 96.86% of the bet. That is quite a bit higher than the average casino slot. The max win of 12150 is also generous, especially considering it was that high already in the first version of the game, released in 2011. The range of bets has been upgraded to a broader range in the remastered version. The players can now bet between 0.3 to 30.

Immortal Romance is a video slot where the story and features build an exciting game that you just want to keep playing for hours.