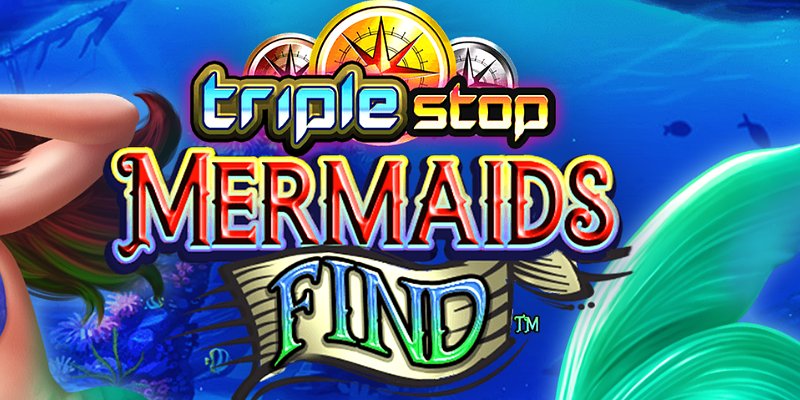 Triple Stop: Mermaids Find is a new casino slot from Playtech with a basic old-school look and more recent features like expanding reels. The game has basic graphics and clunking sounds from the spinning reels that will work perfectly for veteran slot players. Playtech has put 40 paylines on a rather small grid, which increases to 60 when the reels expand. You’ll also find 3 different Scatter Symbols and 2 Wilds, with a golden one awarding extra free spins.

When hunting for riches on the roaring sea, remember to check out the features Wild Symbols, Scatter Icons, Extended Reels, and Free Spins.

Triple Stop: Mermaids Find doesn’t have any moving graphics. The background is a picture of a sea with a few rocks sticking up in the water and two seagulls in the upper left corner. To the right is a red and white lighthouse, and the beige reels are in the middle. The first two reels have two rows, and the following three have three reels.

The mermaid is a folklore creature with a head and upper body like a female human and the tail of a fish, told by cultures on several continents. It’s sometimes associated with floods, storms, and other tragic events. Although no mermaid is visible in the graphics, it’s the second-best-paying symbol in the game, where you make a win by landing at least 3 of the same symbols on any of the 40 paylines going left to right. All wins must start on the first reel to the left, and you can play the game on desktops, notepads, and mobile phones.

The paytable shows how much each combination pays per payline, which means that you have to divide all numbers by 40 to figure out how much one winning payline pays. The lower-paying symbols are the royals 10, J, Q, K, and A. They all pay the same, giving you 1X the bet for a 5-of-a-kind win. The higher-paying symbols are octopus, anchor, ship, mermaid, and lighthouse. These symbols pay between 1.5X and 2.5X the bet. The 2 Wild Symbols substitute all symbols except the 3 Scatter Symbols.

What is the max win in the slot Triple Stop: Mermaids Find?

What features are available in the slot Triple Stop: Mermaids Find?

The Wild Symbols are a death skull dressed in white and blue and another golden one. The Wilds substitute all symbols except the Scatter Icon. In the free spins, they stay on the reels for the entire feature, and the golden Scatter also awards an extra spin.

The Scatter Icons are coins in bronze, silver, or gold. They don’t appear as regular symbols but randomly land in the bottom right corner on any symbol on the third, fourth, and fifth reel. For each spin, all Scatters are always in the same color. Landing Scatters on reels 3 and 4 triggers the Extended Reels feature. Landing Scatters on reels 3, 4, and 5 triggers the free spins.

Reels 3, 4, and 5 grow an extra row to a total of 4 rows when Scatter Icons land on the third and fourth reels. This increases the paylines from 40 to 60, giving you a bigger chance to scope up a big win. Landing a Scatter even on the fifth reel triggers the Free Spins. If not, the reels go back to their original size in the next spin.

Landing 3 Scatter Symbols triggers the Free Spins. You get 2, 3, or 5 spins for triggering the feature with bronze, silver, or gold Scatters. The free spins are played with the extended reels and 60 paylines. Scatter Icons don’t appear in the feature; hence, you can’t retrigger it. You’re awarded an extra spin for every Golden Wild that lands, though. Both Wilds become sticky when they land and stay in their positions for the rest of the feature.

Triple Stop: Mermaids Find is a casino slot for people who want their games to look just like the one-armed bandits did back in the day. At least speaking about the graphics. There’s no music, just a clunking sound of the reels, and there are no animations, either. However, the last 3 reels can suddenly grow a row in the Extended Reels feature, something that would never happen on a physical machine. The Extended reels give you 20 extra paylines, and you have quite good odds of scoring big since you often make wins on quite a few paylines if you happen to make a win.

Landing a Scatter Icon on the last reel in the Extended Reels will give you the free spins, which keeps the 4-row reels. It’s a great feature with sticky Wilds. The only downside is that you only get between 2 and 5 spins depending on the color of the Scatter. To be honest, 2 free spins are way too few, especially since we experienced that they normally don’t pay that much. On the other hand, this is a slot with medium volatility, so players shouldn’t expect the most intense action.

We can recommend the 5-reel games Lord of the Ocean and Pearl Catcher if you want to dive below the sea’s surface with mermaids in games with higher volatility. The first one has a straightforward layout with 10 paylines, while the second has 243 ways to win and a max win of 10000X the bet.