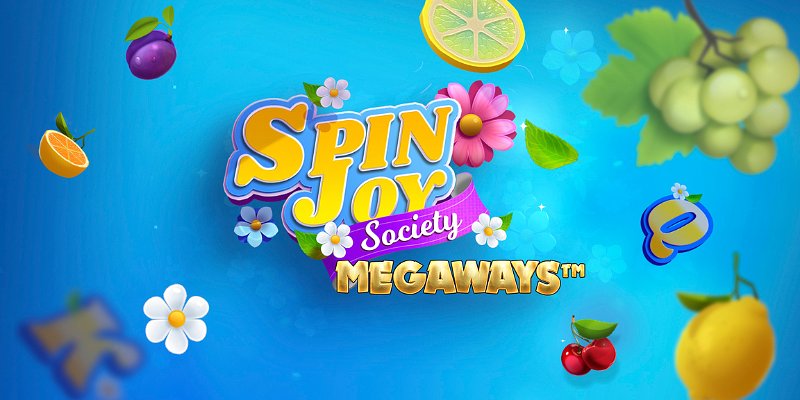 Spinjoy Society Megaways is a new casino slot from Spearhead Studios with classic casino fruit symbols on a Megaways setup, giving the player up to 117649 ways to win. The game is full of flowers and music connected to warm summer days. It might feel a little weird that the Marbella-based game developer releases such a game during the colder times in the Northern Hemisphere, but it might also feel like a fresh breeze for anyone tired of yet another Christmas slot. Spinjoy Society Megaways has cash symbols that can be collected without making regular wins and a free spins feature that can be triggered with up to 205 spins.

Spinjoy Society Megaways is a video slot from Spearhead Studios with 6 reels that change rows between 2 and 7 on each spin. Landing the maximum number of symbols gives the player 117649 ways to win. The Min.bet is 0.1, and the Max.bet is 100. The game’s RTP is stated as exactly 96.00%, and the volatility is high. The lucky player who scores the max win will receive 20000X the bet, and the hit frequency is 32.70%.

Spinjoy Society Megaways is a casino slot with a clean design. There are some flowers in white, blue, and pink at the corners of the screen. The background doesn’t have anything on it but changes color between yellow, blue, purple, green, and turquoise. The symbols appear on transparent reels with a changing number of rows from 2 to 7 on each spin. This means that you will have between 64 and 117649 ways to win. To make a win, you need to land at least 3 of the same symbols on adjacent reels, starting with the first reel to the left. The game is available on mobile phones and all other devices.

The lower-paying symbols are 10, J, Q, K, and A. They all pay the same, giving 0.8X the bet for a 6-of-a-kind win. The higher-paying symbols are lemon, grapes, cherries, plum, and watermelon. Landing a win containing 6 of those symbols pays between 1.5X and 4X the bet. You need 3 Scatter Symbols to trigger the free spins, and there’s no Wild Symbol. There is also a Coin and a Collector Symbol.

What is the max win in the slot Spinjoy Society Megaways?

What features are available in the slot Spinjoy Society Megaways?

Every time you make a win, the symbols will vanish to make room for new ones. If you’re able to make a new win, those symbols will also disappear, and new ones fall from above. These cascades continue as long as you make new wins, and they all belong to the same spin.

Coins with the value of 0.5X, 1X, 2X, 5X, and 10X can land anywhere on the reels. You can collect the cash value with a Collector Symbol, but you can’t make regular wins with them.

The Collector Symbol is a piggy bank. Whenever it lands, it collects all visible Coin Symbols. If more than one piggy bank appears, they all collect the values from all Coins.

Any win – even your free spins earnings – can be gambled as long as it’s not over 100X the bet. Your job is to foretell what kind of playing card will be drawn. You can either make a 50/50 gamble, guessing what color the card will have. You can also guess which of the 4 suits it will be. If you’re right, your win will double or quadruple, and you can choose to collect it or try to gamble again. If you’re wrong, you’ll lose the win.

The Free Spins has a multiplier starting at 1X, growing by 1 for every cascading win you make during the feature. The multiplier applies to both regular wins and coin collection. The free spins are over when the player runs out of spins.

Spinjoy Society Megaways is like a nice breeze on a summer day. It feels good for the moment, but you will probably forget about it pretty soon. There are tons of Megaways games on the market now, with many of the biggest game developers making games with the mechanic. The gold coins and collector symbols in Spinjoy Society Megaways are a nice touch that we usually don’t see in Megaways games. The free spins multiplier also multiplies the coins, making them extra valuable in the feature.

A growing multiplier is common in Megaways free spins. It feels great to see that number grow, knowing that your chances of scoring huge wins become bigger and bigger for every cascade. Another wicked thing about this game is that you can trigger 205 free spins by filling up the reels with 42 Scatter Symbols. The chances are probably super slim, but it’s still a cool fact.

The game’s RTP of 96.00% is alright, and the bet range between 0.1 and 100 should suit most players. If you’re looking for a Megaways slot with more of a story, Rasputin Megaways and Moriarty Megaways are two pretty cool ones.