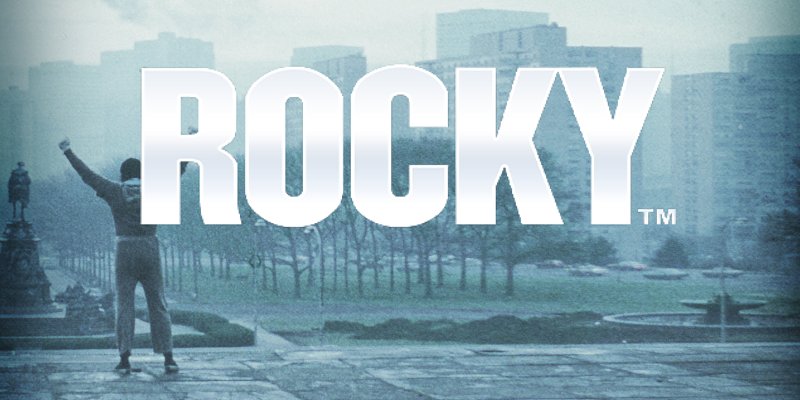 Rocky is a new casino slot from Playtech starring the iconic film boxer Rocky Balboa, played by Sylvester Stalone. The first movie following the small-time Philadelphia boxer who gets a chance to fight for the world heavyweight championship was released in 1976. Five sequels have followed, and this slot contains six bonus games representing each one of the movies. Get ready to meet Apollo Creed from the first movie and Clubber Lang from the third, in free spins with sticky Wilds and a random rectangular area giving you only high-paying symbols. The lethal Russian Ivan Drago from the fourth movie can give you a proper beating in the respins.

Six features, one legend. That's the tagline for this game that will seem familiar to pretty much all players over 30 years. Even younger players might know this boxer story that became popular again when the sixth movie was released in 2006. The game's background is a picture of Rocky Balboa standing on a set of stairs where he is running and training hard in his early career. The 5 reels are neatly placed in a square in the middle, and you make a win by landing 3 or more of the same symbol on a payline, starting on the first reel to the left. The game is available on desktops, notepads, and mobile phones.

The lower-paying symbols are 10, J, Q, K, and A. They all pay the same, giving you 0.5X the bet for a 5-of-a-kind win. The higher-paying symbols are Rocky's dog Butkus, Ivan Drago, Clubber Lang, Apollo Creed, and Rocky himself. Landing these guys on a complete payline pays between 0.8X and 1.5X the bet. The Wild Symbol substitutes all symbols except the Scatters.

What is the max win in the slot Rocky?

What features are available in the slot Rocky?

The Wild Symbol is a white horse with the text "Italian Stallion." It substitutes all symbols except the Scatters and doesn't appear in the base game. Landing 5 stallions on a payline pays 15X the bet.

The Scatter Symbols can only appear in the four corners of the grid during the base game. There are 6 different symbols representing one of the Rocky movies and that movie's unique bonus game. Landing the same Scatter in all corners triggers that specific feature.

The Apollo Creed Free Games gives the player 8 free spins with sticky Wilds that can appear on top of the spinning reels and stay in their positions until the end of the feature.

The player gets to pick 3 out of 9 gloves. Each glove reveals a cash prize or a gold coin, awarding 3 extra picks. The sum of all prizes is added together when all picks have been used.

The Clubber Lang Free Games gives the player 6 free spins. A rectangular area will be randomly marked anywhere on the grid, guaranteeing to land all Clubber Lang or Rocky Symbols within it.

The Ivan Drago Hold & Respins is hosted by the cold-blooded boxer Ivan Drago from the fourth film, played by Dolph Lundgren. You start with 3 spins and can either land a glove or a blank on each position. The gloves contain cash prizes, and the spins are reset whenever one lands. The feature ends when the player runs out of spins or all 25 positions are filled with gloves. Filling the entire grid will multiply the cash value of each glove by 2-4.

The Multi-Wheel Feature has 3 wheels. You get to spin them once, starting with the smallest wheel, which contains a multiplier. The middle wheel will give you a cash value that is multiplied by your already awarded multiplier. The biggest wheel can award nothing, a respin, or a special prize marked V, worth 100X the bet. If you land a respin on the third wheel, you'll get to spin all three wheels one more time. There's no upper limit to how many turns you can win.

A stack of prize multipliers is displayed to the right of the reels, ranging between 1X and 1000X. A red box, starting at 1X, will climb the stack, highlighting multipliers with higher awards. When it stops, the player presses the Push Harder button for a chance to advance to the next level. If the last attempt fails, the active prize multiplier will be awarded.

You can buy one of the bonus games for 38X the bet, but you can't choose which one to play. After the purchase, you will get a spin that lands 4 triggering symbols to any of the 6 features.

There's actually another Rocky slot from Playtech released some year ago, which shouldn't be mixed up with this one that confusingly has the same name. This 5x5 slot is a gold mine for anyone familiar with the Rocky movies. The base game has the iconic picture of Rocky Balboa on the stairs he's running on, and the bonus games have scenery from the films they represent. There's also a great variation in the different games.

You will find two different free spins, one featuring Apollo Creed from the first movie and the other one Clubber Lang from Rocky III. Apollo can award sticky Wilds, while Clubber creates a rectangle that will have only Rocky or Clubber symbols on each spin. The heavyweight feature lets you pick boxing gloves full of cash prizes, and Ivan Drago is waiting for you with a juicy respins feature.

The multi-wheel is also interesting, and it's quite amazing to hear that there's no limit to how many respins you can win. The last training feature is alright, too, giving you an extra chance to climb the ladder with the Push Harder button. The game's RTP of 95.9% is a little under the average casino slot but still good enough not to miss out on this fighting adventure.

Rocky from Playtech is a casino slot with the film boxer Rocky Balboa, packed with a unique bonus game for each of the six movies.