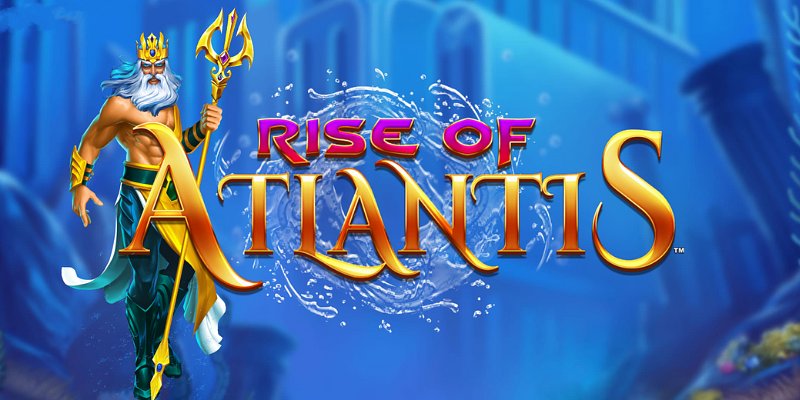 Rise of Atlantis is a new casino slot from Blueprint Gaming taking the player to Plato’s fictional island Atlantis. The island represents the antagonist naval power of Ancient Athens. Atlantis is said to have been submerged under water after falling out of favour with the Greek gods, and this game is located beneath the surface of the sea. You can forget totally about paylines because wins are made by landing 8 or more symbols anywhere on the screen. To help you is a water god – we’d guess it’s Poseidon – who shoots multiplying water bubbles on the reels, giving you great chances to score big. Are you ready to discover the submerged Atlantis?

Rise of Atlantis is a video slot from Blueprint Gaming with 6 reels and 5 rows. There are no paylines; the player makes wins by landing 8 or more symbols of the same type anywhere. Bets can be put between the Min.bet 0.2 and the Max.bet 100. The game has been created with two different RTPs, where game operators can choose between RTPs of either 96% or 94%. Rise of Atlantis has mid/high volatility and a max win of 10000X the bet.

If Atlantis is about to rise again, you should definitely be aware of the features Cascading Wins, Scatter Symbol, Rising Multiplier, Free Spins, and Bonus Buy.

Rise of Atlantis takes place underwater, and it’s hard to see any signs of the previous island civilization. The game’s name might want to tell us a story where Atlantis rise again, but you will find yourself underwater the whole time. Some water bubbles float upwards, and there’s a treasure next to the seaweed on the bottom. The reels have a dark background, and to the left stands a shirtless man with a big gray beard and a golden crown on his head. He’s holding a trident, a three-pronged spear usually in the hands of the Greek water gods Poseidon and Neptune.

All setting buttons are located at the bottom, and the spin and bonus buy buttons are to the right. To make a win, you need to land at least 8 of the same symbols anywhere on the grid. When a win is made, the involved symbols will disappear and make room for new ones in so-called cascading wins. The game is available on various devices, such as desktops, notepads, and mobile phones.

The lower-paying symbols are gem-like figures in different shapes in green, blue, red, and purple. The higher-paying symbols are a crown, a clay bottle on the bottom of the ocean, a pillar, a trident, and the god-looking man. There’s no Wild Symbol in this game and the Scatter Symbol – represented by another trident – is what you need to activate the free spins.

What is the max win in the slot Rise of Atlantis?

What features are available in the slot Rise of Atlantis?

All symbols taking part in a win will disappear to make room for new symbols. If you’re able to make a new win, the involved symbols will once again vanish while new ones fall down. This goes on as long as you can make wins, and all cascades belong to the same spin.

The Scatter Symbol is the top of a trident with the text “bonus.” It can appear anywhere, and landing 4 or more awards 15 free spins.

The Rising Multiplier can trigger randomly on any spin. The god next to the reels waves his trident creating one or several multiplier bubbles that land on top of other symbols. Each bubble can have a multiplier of up to 500X the bet. If any win is achieved, the multiplier will be used to multiply that sum at the end of a cascade. When all cascades are over, the multiplier will rise 1 position on its reel, where it’s used in the case of any wins in the next spin.

The multiplier is in use until you have made enough spins for it to leave the reels. In the free spins, the multiplier increases every time it rises, making it possible to hit really big wins.

The Free Spins feature starts with 15 spins as soon as you land 4 or more scatter symbols anywhere on the reels. During cascading wins, any visible Rising Multiplier will multiply the final win when all cascades are over. On the next spin, the multiplier increases and moves up one position on its reel. The free spins are over when the player runs out of spins or when the max win of 10000X the bet is reached.

The free spins are for sale. You can either pay 100X the bet for a regular free spins session or 350X the bet for an Ultimate Rise Free Spins which will have enhanced multipliers – giving you a chance to score really big.

Rise of Atlantis has a lot in common with Pragmatic Play’s Gates of Olympus, another game where you don’t have to worry about paylines; combinations of 8 or more symbols pay wherever they end up. Both games award 15 free spins for landing 4 scatters, and you’ll find a similar kind of rising multiplier. In fact, the lower-paying symbols are almost identical too in both games. The max win has been doubled to 10000X the bet in Rise of Atlantis, which is considered on the better side for a game with mid/high volatility.

The game has a decent size of the RTP provided that the higher one of 96% by default is used. It’s a good-looking game, and we like how the multipliers are stuck in a water bubble that advances one step upwards on each spin. If you’re into mythology and Greek gods but want a more classic-looking slot, we can recommend Amazing Link Poseidon, which also features a water god but on a classic 5x3 setup with 20 paylines. All in all, it's a game that comes packed with a lot of action, where we get to enjoy a great interplay between great features. The fact that each multiplier bubbles can have a multiplier of up to 500X quickly confirms how it can be possible to obtain the big wins of up to 10000X and this version feels like Gates of Olympus on steriods.

Rise of Atlantis from Blueprint Gaming is a win-all-ways game where players don’t have to worry about paylines.