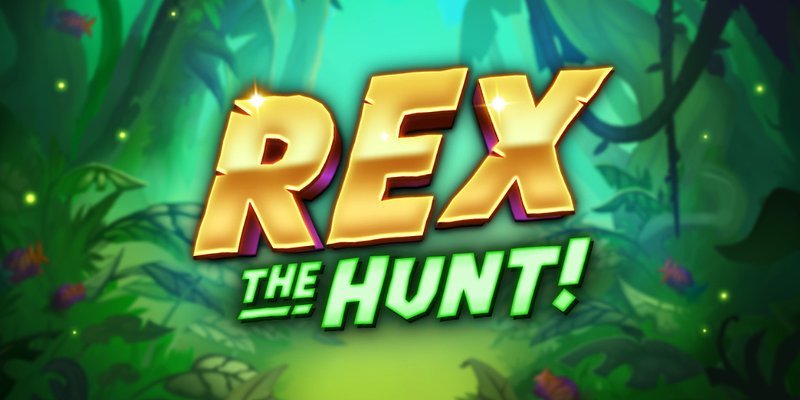 Rex the Hunt is a new casino slot from Thunderkick with a cigar-smoking and knife-wearing man on the hunt for dinosaurs. He’s the most valuable symbol in the game, followed by the fearsome Tyrannosaurus rex. Did you know that rex means “king” in Latin? No predators were threatening the Tyrannosaurus in Jurassic times, but the short-handed monster is in danger now when facing a human hunter. The ultimate battle goes down in the free spins, where Mystery Symbols become sticky and stay on the reels for the rest of the feature.

While you’re spinning the reels in this Jurassic jungle, watch out for the features Wild Symbol, Scatter Symbol, Mystery Symbol, and Free Spins.

Rex the Hunt is located in a tropical green forest. The reels are in the middle of the screen, and to the sides are trees and vines. Since the game has humans and dinosaurs, species that have never inhabited the planet at the same time, we don’t know where or when this game takes place. Maybe some scientists have raised dinosaurs with blood from insects trapped in fossilized tree resin, so-called amber, like in the Jurassic Park movies. To make a win, you need to land at least 3 symbols on a payline, going left to right. All wins must start on the first reel to the left, and you can play the game on all devices, such as desktops, notepads, and mobile phones.

What is the max win in the slot Rex the Hunt?

What features are available in the slot Rex the Hunt?

The Wild Symbol is a W on amber with a mosquito trapped in it. It substitutes all other symbols except the Scatter Symbol.

The Scatter Symbol is the game’s logo. It appears on reels 1 and 6, and landing a Scatter on both reels on the same spin triggers 10 free spins. Landing 2 Scatters within the free spins triggers 5 extra spins.

The Mystery Symbol appears anywhere except on reels 1 and 6. It lands stacked, many times covering all positions on a reel. After Mystery Symbols have landed, they all transform into the same random symbol. They can turn into all sorts of symbols except the Scatter. In the free spins, the symbols become sticky and stay on the reels for the rest of the feature.

Any Mystery Symbol from the spin that triggers the free spins will be carried over to the feature. The symbols stay on the reels during the feature, and any Mystery Symbol landing while spinning will also become sticky. Landing 2 Scatter Symbols will trigger 5 extra spins, and the feature ends when the player runs out of spins or when the max win of 4000X the bet is reached.

The graphics in Rex the Hunt are well-made, and the reels run smoothly. The 4 dinosaurs look distinctive, and they’re easy to separate. It’s not the first time a game developer has made a game with dinosaurs and humans, which might annoy some players who think it’s unrealistic, considering the dinosaurs existed long before humans. The rest of us can easily buy the Jurassic Park concept and submerge into this adventure.

Mystery Symbols can sometimes feel like they don’t contribute much to the gaming experience, and players may ask for the revealed symbols to land straight away instead. Rex the Hunt has a nice twist to this, with the Mystery Symbols becoming sticky in the free spins, staying on the reels for the rest of the feature. It gives the player bigger chances of scooping up great wins for every Mystery Symbol that lands.

If there’s something negative about this adventure, we’d say it’s the max win of 4000X the bet. It’s definitely on the lower side compared to other highly volatile slots. The RTP of 96.16% is good; just watch out so you don’t end up playing any of the different versions with lower RTP. If this makes you want more dinosaur adventures, check out Dinosaur Rage and Rhino Rilla Rex.

Rex the Hunt from Thunderkick is an action-packed casino slot where mystery symbols become sticky in the free spins, raising the chances of landing wins containing many symbols.