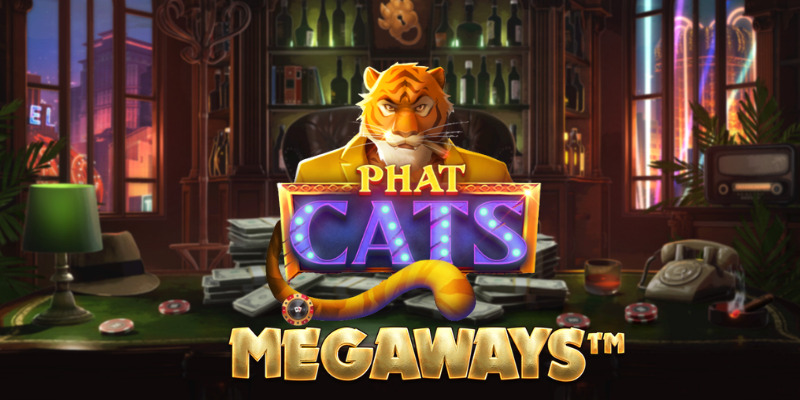 Phat Cats Megaways is a new casino slot from Kalamba Games where we get to enjoy a legendary feature in a classy setting. A few years ago, Megaways was the most hyped feature out there, with most providers doing whatever they could to get their hands on it. By now, the hype has cooled off. However, the Megaways feature still has a future in iGaming, and one of the providers that don’t seem to be done with it is Kalamba. Lately, the provider has released 1 Megaways slot every month or so. In August, we followed a thrilling battle between cats and mice in Rumble Ratz Megaways, and in September, we went back to the future with Machina Reloaded Megaways. Although cats are present in this one as well, Phat Cats Megaways brings something new to the table. Let’s take a look!

Phat Cats Megaways is a video slot from Kalamba Games with 6 reels and rows that varies from 2-8. As in any Megaways game, there are no paylines. Instead, a maximum of 200.704 ways can be achieved. Players choose from a Min.bet of 0.20 and a Max.bet of 50. The game is played at an RTP of 96.15%, placing it slightly above the industry average. Phat Cats Megaways offers high volatility, which can result in a max win of 20.000x the bet.

The game takes place in what seems to be an office. It’s a toned-down atmosphere, with dampened lighting and a cigar slowly burning. However, the setting changes dramatically if you turn the sound on. A funky, upbeat tune with a lot of bass beats in your ears while spinning, proving how much of a difference music can make to an environment. An analog phone, a classic radio, and the skyline outside of the windows make us assume that this game takes place a while back. You can try it out for yourself on all common mobile devices and desktops. A winning combination is created by landing 3 or more matching symbols on consecutive reels, starting from the leftmost reel.

The lower-paying symbols include the classic royal symbols: 10, J, Q, K, A. Six-of-a-kind with one of these will pay 0.2x the bet. Different phat cats in suits depict the higher-paying symbols. A winning combination of 6 with one of these will pay 0.75x-3x the bet. In addition to all of these, a few more symbols can appear. Wild symbols can land, substituting for all of the regular paying symbols that we just covered. The Scatter symbol features a car, with the word “bonus” underneath, landing 3 or more triggers the Free Spins feature. Golden Coin symbols award players a prize value, and Mystery symbols will reveal a joint symbol. Let’s take a closer look at the features!

What is the max win in the slot Phat Cats Megaways?

What features are available in the slot Phat Cats Megaways?

Wild symbols substitute for all other symbols except Scatter, Coins, and Mystery. This enables more winning combinations.

Landing 3 or more Scatter symbols triggers the Free Spins feature. The bonus starts with 4 active rows on reel 2 and reel 5, both of them filled with Mystery symbols. The feature lasts until there is no Mystery symbol visible on the reels. After each spin, the win multiplier increases by 1.

If you want to jump straight into the Free Spins feature, you can do so by buying it for 149x the bet.

Time and time again, Kalamba provides engaging Megaways slots. While many providers have stopped making them, Kalamba is picking up pace and continues to show why it became such a hit feature in the first place. What we like the most about this one is its hefty number of features.

There are plenty of innovative Megaways slots out there. However, there are also many that follow the same recipe with increasing multipliers and mystery symbols. Phat Cats Megaways has all that, but more. We appreciate that you don’t have a set amount of spins in the Free Spins. Instead, Kalamba uses a feature that we’ve seen in games before, such as Razor Shark, where all you need to do is land more Mystery symbols for the feature to stay alive. Thus, every Free Spins feature has the possibility of containing an infinite number of spins.

Furthermore, the game’s design features a cool theme with badass cats, poker chips, and cigars. What more could one ask for? With good RTP, high volatility, and a thrilling max win of 25.000x the bet, this game is definitely worth checking out!