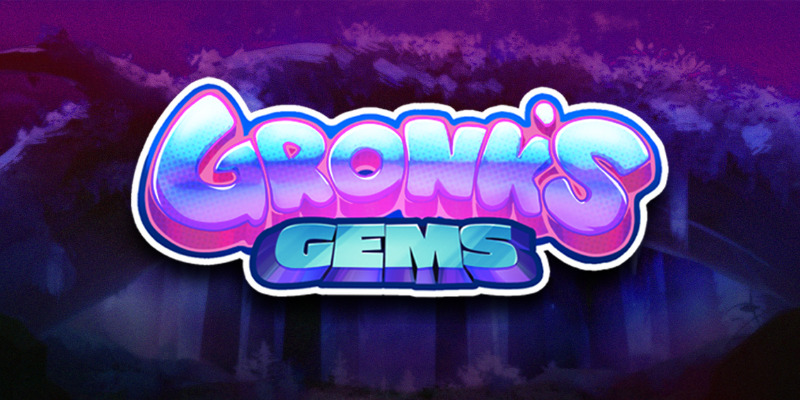 Gronk's Gems is a new casino slot from Hacksaw Gaming where we meet the cave troll Gronk. A troll who truly has a great passion for gems and fortunately we get to join him on a shimmering game experience. Trolls are something that originates from the Nordic folklore, where these gigantic creatures were said to stay isolated in caves and mountains deep in the Nordic forests. They were always active at night or in the dark, since direct sunlight was said to turn them into rocks and mountains, so their isolated presence makes sense. However, it's not a dark place we find ourselves in within this slot, as copious amounts of shimmering gems illuminate the presence. Let's visit this place and find out what you can expect to see during the spins.

Gronk's Gems is a video slot from Hacksaw Gaming that features 6 reels and 6 rows. You create a winning combination by landing 5 or more of the same symbol type in a cluster, which then activates a cascade feature. You can choose between making a Min.bet of 0.10 and a Max.bet of 100. The game has been created with a higher-than-average RTP, where we have an RTP of 96.24%. Gronk's Gems has a medium volatility, where you can win up to 7500X the bet.

Within this gaming adventure that takes place alongside a giant troll, we have a couple of great features to help us in our quest for the bigger wins. The features are Cascade, Wild Symbol, Charged Symbols & Epic Gem, Gronk's Treasure, Gem Hoarder and Bonus Buy.

The game's design consists of a troll theme, where we get to meet the gem loving troll Gronk. In the background of the reels, we can see Gronk adorned with a lot of valuable gemstones. You can play this slot on all the devices notepads, desktops and mobiles. You create a winning combination by landing 5 or more of the same symbol type on adjacent positions in a cluster, which then activates the cascade feature.

What is the max win in the slot Gronk's Gems?

What features are available in the slot Gronk's Gems?

When you create a winning combination, the cascade feature is activated and all symbols that were part of the win will disappear from the reels. Then new symbols will fall down to cover the empty positions, and this will continue as long as new wins are created.

The wild symbol helps to enable more winning combinations by substituting for other paying symbols. It can only land within the Gem Hoarder feature.

When you create a win, the symbol type that was part of the win will enter a charged state and then start to glow. They continue to glow during the whole spin and during cascades, epic gem symbols can land on the reels. This epic gem will then be activated when no more wins are created and then all charged symbol types will turn into the highest paying charged symbol type.

If you land 3 Gronk head scatter symbols, the Gronk's Treasure feature is activated. You are then greeted with 10 free spins and during these spins the chances of landing epic gem symbols are higher.

If you land 3 Gem Bag scatter symbols at the same time, the Gem Hoarder feature is activated. You are then greeted with 5 refilling free spins and by landing 3 scatter symbols at the same time, all 5 free spins are reset. During these spins you will be able to take advantage of a progressive global multiplier, which increases as winning symbols are removed. The multiplier increases by an amount equal to the number of symbols that were removed, and you can take advantage of this multiplier by creating a win, when an X wild symbol is adjacent to the win. You can create a win where several X wild symbols are included in the same win and then the multipliers will be applied the same number of times as the number of X wild symbols involved.

If you want to take advantage of any of the features right away, you can use the bonus buy option. You can then choose from these which cost and award the following:

3X(active) = When you have this activated, each spin has 5 times the chance of activating one of the bonus games.

It's certainly an exciting gaming adventure that we get to take part in with this cave troll and he has certainly found a good spot as everything sparkles with precious gems. The game has an entertaining set-up, with winning clusters resulting in cascades being activated and thus a spin can be very lengthy. Both within the base game and within the Gronk's Treasure you can enjoy a bonanza of precious gems, as you can charge them up and with the help of an epic gem they are absorbed and then collected. This is something that occasionally appears within the base game, but the epic gem symbols land more frequently within the Gronk's Treasure bonus game and thus it becomes more fast-paced there.

Another feature that we can take advantage of here, is the Gem Hoarder and it is very reminiscent of what we have previously seen within Stack 'Em, among others. Where a global multiplier increases in parity with the number of symbols included in wins and by creating a win where X wild symbols are adjacent, you are certainly up for a treat. The game has its charm and if you like bonus buy options, then you won't be disappointed within this version as there are 3 different options to choose from. The game has a good size of the RTP and the medium volatility results in the balance not varying so much during the spins. Unlike the folklores that mostly claim that the trolls are mean, we get that disproved within this version, where Gronk gives us a warm welcome.

Gronk's Gems is a slot where we get to meet a gem loving troll who has a few nifty tricks to help us scoop up the huge wins.