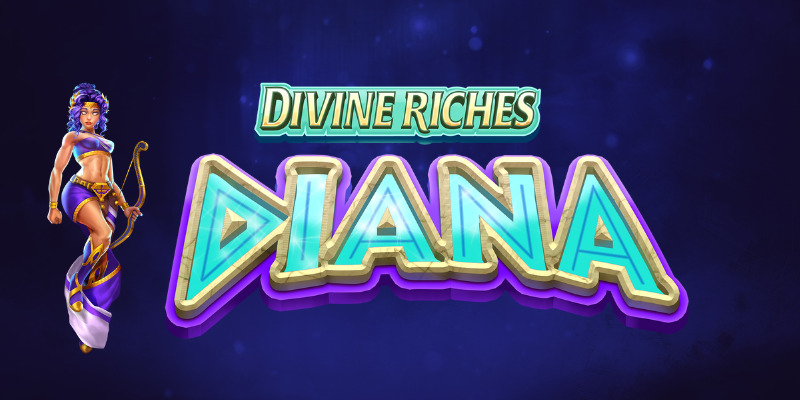 Divine Riches Diana is a new casino slot from Just For The Win where we visit Diana, the Roman goddess of hunting. This is the second installment of the Divine Riches series. Last time around, we visited a greek god in Divine Riches Helios. Diana herself is Roman but has a Greek counterpart in Artemis. Besides being the goddess of hunting, Diana, or Artemis, is said to be the goddess of vegetation, childbirth, care of children, and the moon. This is quite the resumé, so we have high hopes for an epic experience. Just For The Win has sent us on plenty of exciting adventures before, such as Kodiak Kingdom and Robin Hood’s Heroes. Let’s see if Diana can match those!

Divine Riches Diana is a video slot from Just For The Win that features 5 reels, 4 rows, and 30 paylines. Players can choose between a Min.bet of 0.20 and a Max.bet of 50. With an RTP of 96.05% and a hit frequency of 24.73%, this game sits around the industry average on both measures. Divine Riches Diana is played at medium volatility and offers a max win of 5000x the bet.

Being a goddess, Diana has the ability to craft some exhilarating mechanics. The features are Wild Symbol, Scatter Symbol, Divine Rewards, and Free Spins.

As mentioned, Diana is also seen as the Goddess of the Moon. We might not be quite there, but the slot seems to be located in the sky. An aurora fills our surroundings with beautiful green light, creating a magical feeling. We can’t fly, but we still feel safe with Diana. After all, she is the goddess of protection in the night, so we’ll trust that she’ll keep us from falling. The music shifts from joyful to thrilling, creating a comfortable yet exciting atmosphere.

You can play this game on all common mobile devices and desktops. A winning combination is created by landing 3 or more matching symbols on consecutive reels within the game’s lines, starting from the leftmost reel.

The lower-paying symbols include diamonds, clubs, hearts, and spades. A full line of 5 with one of these symbols will pay 2.5x-3x the bet. The higher-paying symbols consist of green fruit, vase, harp, bow, and Diana. Five-of-a-kind with one of these symbols pays 4.5x-10x the bet. The Wild symbol substitutes for all other paying symbols. Small tokens can land, giving a random chance to trigger the Divine Rewards feature. The Free Spins symbol is a Scatter and is used to trigger the Free Spins feature. Let’s take a look at the features!

What is the max win in the slot Divine Riches Diana?

What features are available in the slot Divine Riches Diana?

Every time a Token symbol lands, there is a chance to trigger the Divine Rewards feature. This will activate a picking game, where revealing 3 of the same symbol awards the corresponding prize. The following prizes are available:

During Free Spins, all Diana symbols will be collected after each spin. When 12 Diana symbols have been collected, the Fortune of Diana feature will be triggered.

Fortunes of Diana upgrades a symbol to the next more valuable symbol according to the paytable and awards 2 extra spins. If you’ve played games such as Beat The Beast Quetzalcoatl’s Trial or Pink Elephants, this feature is relatively similar. More upgrades result in a higher potential for full lines.

Using ancient gods or goddesses automatically gives the game a majestic ground. Just like it’s fun when providers use celebrities in games because you recognize them, it’s enjoyable to see the characters you’ve read about in books taking shape in slots. There’s a risk to it, however. People go into these sorts of games with predetermined notions of how a specific character or celebrity should be portrayed and can easily be disappointed if it turns out to be different from that.

So did Just For The Win do Diana, Goddess of the Hunt, justice? To be honest, that’s not for us to decide. What we can say, however, is that it’s a good-looking game with a pretty setting and enjoyable mechanics. Nonetheless, this slot is more or less a re-skin of Divine Riches Helios. That doesn’t have to be negative, though. Slot series are exciting, but we wish that they had taken the route of Thunderkick’s Beat the Beast series, where every game has a similar look but different gameplay.

Everyone hasn’t played Divine Riches Helios, though, so this will still feel new to many players. The gameplay is not revolutionary, but the features are engaging and are sure to provide you with a fun experience. Divine Riches Diana has good RTP and a solid max win; it’s worth a shot!

Divine Riches Diana by Just For The Win introduces players to Diana, Goddess of the Hunt, who takes you on a thrilling adventure in the night sky.