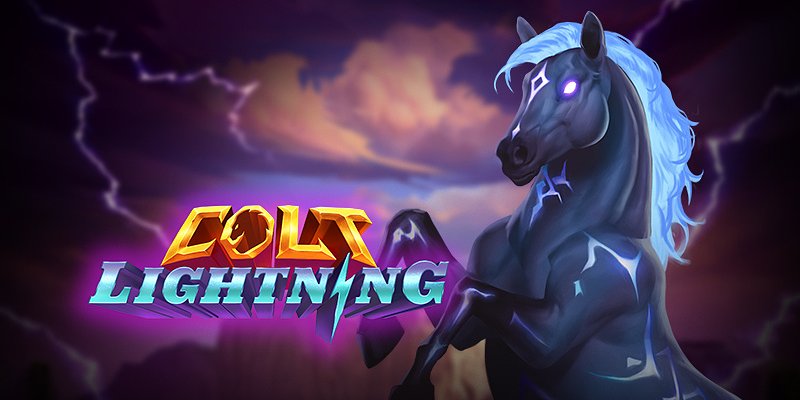 Colt Lightning is a new casino slot from Play'n GO with a wild horse being struck by lightning, giving it superpowers. This stormy game treats you with a base game of Lightning Strikes and Rapid Re-Spins, which can expand each reel with up to 3 extra rows. The thunders become even more powerful in the free spins, which are triggered by horseshoes. This game is all about taming the wild horse. Do you have what it takes to become its master?

Colt Lightning takes the player straight to the American prairie, with a similar landscape as in games such as Buffalo Toro, Big Bucks Buffalo Gigablox, and Golden Stallion Ultraways. The grid looks a little different, though, with three symbols on the first and last reel and four on the three reels in the middle. Each reel can expand up to 3 rows thanks to the Rapid Re-Spins, and you make wins by landing at least 3 of the same symbols on adjacent reels, starting with the first reel to the left. This system gives you 576 ways to win from the start and 12348 ways to win when the reels are extended to a maximum.

What is the max win in the slot Colt Lightning?

What features are available in the slot Colt Lightning?

The Wild Symbol is a picture of a wild landscape with mountains and cactuses. It appears on reels 2, 3, and 4 and substitutes all regular paying symbols but not the Scatter or Horseshoe.

The Colt Strike can trigger randomly on any spin in the base game. The feature adds extra Colt Symbols to the reels, increasing your chances of scoring big.

The Horseshoe Symbol can only appear on reel 3, and it triggers the Rapid Re-Spin whenever it lands. During the re-spin, the grid expands vertically, adding a row on each reel. You can retrigger the feature up to two times by landing another horseshoe. Retriggering the Rapid Re-Spin twice will give you 6-7-7-7-6 rows and 12348 ways to win. The grid returns to its normal size whenever the feature finishes.

The chance of triggering the Colt Strike increases during the Rapid Re-Spin, but you can't activate the Super Colt Spins since the Scatter Symbol is removed from the reels.

You need to land 3 Scatter Symbols to activate the Super Colt Spins. You start with 10 free spins and can retrigger 10 more by landing 3 new Scatters. You can retrigger up to a maximum of 100 free spins. The horseshoe can land during any spin and trigger the Rapid Re-Spin within the free spins.

Colt Lightning is a wild game taking you into the wild. Among the animals is the young male horse, the colt, the most valuable one. It becomes even more precious in the free spins, where its value is doubled. This unpredictable horse can also spark the Colt Strike on any spin in the base game, adding extra horse symbols to the reels.

The Rapid Re-Spin adds extra excitement to the game by extending the grid, giving you more chances to make wins when the reels grow. However, the Super Colt Spins are the game's main event, and the lucky player can retrigger up to 100 free spins.

The game's RTP of 96.24% is solid, and the max win of 25000X the bet is really good, a fair bit more than expected. The game has high volatility but doesn't feel as volatile as some other casino slots.

Colt Lightning from Play'n GO has a wild young horse that needs to be tamed if you want to score the max win of 25000X the bet.