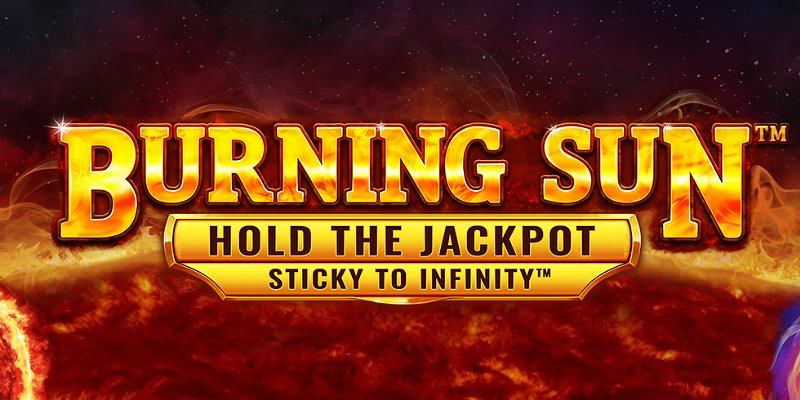 Burning Sun is a new casino slot from Wazdan with symbols as hot as the Sun. Players can choose between 3 volatility levels, from low with more frequent payouts but in most cases smaller ones, up to high where the wins can be really big but usually not as common. Burning Sun pays for any combination of 10 symbols of the same kind, no matter where they land on the reels. You’ll also find a respins feature where you’re awarded the max win of 5000X the bet for collecting 16 suns.

Burning Sun is a video slot from Wazdan with 4 reels and 4 rows. There are no paylines; you’re instead awarded a win for landing 10 or more symbols of the same kind anywhere on the reels. The Min.bet is 0.1, and the Max.bet is an even 100. The RTP in space is 96.12%, and the volatility is high. If everything goes your way, you can score the max win of 5000X the bet.

Up in space, close to the Sun’s enormous mass of burning energy, are a few useful things to take advantage of. Look out for the features Game Style, Wild Symbol, Gamble, Collector Symbol, Bonus Symbols, and Hold The Jackpot Bonus Game.

A big burning sun is just what greets the player in this game. The upper part of the screen is a dark space with some blinking stars, and the lower part is a bit of the sphere-shaped Sun with fire flames on it. The black reels have burning symbols, and the logo to the right of the reels is also burning hot. There’s no surprise the Sun produces all this heat, considering that the star fuses about 600 million tons of hydrogen into helium, converting 4 million tons of matter into energy every second. Other rules apply out in burning space, and you need to land 10 symbols anywhere to make a win. The game is available on mobile phones and other devices.

Some of the symbols are very familiar to any slot player, although we’re far away from mother Earth. The lower-paying ones are 10, J, Q, K, and A. They will give you between 10X and 50X the bet for a win covering all 16 positions. The higher-paying symbols are a burning star and number 7. They pay 100X to 200X the bet for a 16-of-a-kind win. The Wild Symbol substitutes all mentioned symbols, but not any of the Jackpot Bonus Symbols.

What is the max win in the slot Burning Sun?

What features are available in the slot Burning Sun?

Next to the spin button is a button with 3 chilli peppers. Pushing the button so 1 chilli lights up will give you low volatility, and 2 chillies equals medium volatility. Lightning up all 3 will result in a highly volatile game where the biggest wins can be made but where the winnings are less frequent statistically. It’s all up to you what kind of game you prefer. The RTP is the same for all modes.

The Wild Symbol is a burning inferno saying “wild.” It can appear anywhere and substitutes all regular paying symbols. Only the highest win per spin is paid, so you can never make wins with more than one kind of symbol even if you have a bunch of Wild Symbols.

Every win can be gambled in a double-or-nothing bet up to 7 times. It is up to the player to choose to gamble or to collect a win. In the gamble feature, you have to foretell if a blue or green symbol will show up, resembling a coin toss. If you pick the right one, your win is doubled, and you can choose to gamble it again or to collect your winnings and go back to the base game.

The most common of the Bonus symbols is the Cash Symbol. It is a burning yellow sun with a cash prize between 1X and 15X. The symbol has no value in the base game unless the bonus feature is triggered.

The Jackpot Symbol is a Cash Symbol on steroids, only appearing in the bonus feature. The Mini, Minor, and Major Jackpot Symbols are worth 20X, 50X, and 150X the bet.

The Mystery Jackpot Symbol is a blue space with what looks like an exploding sun in the middle. It works just like the Mystery Symbol, but it guarantees to transform into either a Jackpot or Collect Symbol at the end of the bonus feature.

The values of all symbols are added together and paid to the player at the end of the feature. Any present Mystery and Jackpot Mystery Symbol is also transformed and paid out. If a Mystery Symbol is transformed into a Collect Symbol, the values of all other symbols are multiplied by a number between 1X and 20X. Filling all 16 positions on the grid awards the Grand Jackpot of 5000X the bet. The Grand Jackpot is the game’s maximum win, and you won’t be awarded any of the values from the Bonus Symbols.

Burning Sun is a good-looking slot wholly dedicated to the big star. Everything is on fire, and the game feels alive, with flames and sparks soaring around. The setup with making wins no matter where the symbols land also suits this game, but you have to get at least 10 of 16 symbols of the same kind to win. Landing 10 symbols will actually only pay 0.4X to 2X the bet, so you want even more. This can be compared to Hola Frutas, a 6x6 slot that pays for any combination of 8 or more symbols, or Rise of Atlantis, a 6x5 slot that also awards wins starting at 8 symbols.

Burning Sun has a Wild Symbol, though, which most games with this setup don’t. The Wild Symbol helps a lot, but you can’t make more than one win per spin, even if you land a bunch of Wilds. The respins feature is what you’re aiming for by landing 6 Bonus Symbols. They are, as usual in games with respins features, not worth anything unless the respins are triggered. The Mystery and Jackpot Mystery Symbols will stick on the grid until the feature is triggered, though, raising your chances of activating it.

This game’s RTP of 96.12% is about standard, and the possibility to change between 3 volatility settings is pretty cool. We assume that the stated hit frequency of 9.84% is accurate for the highly volatile mode. It means that about one of ten spins is a win on average, and most games have higher hit frequencies than that.

Burning Sun from Wazdan takes the player to a burning inferno where the symbols pay wherever they land, and a respins feature can bring the max win of 5000X the bet.