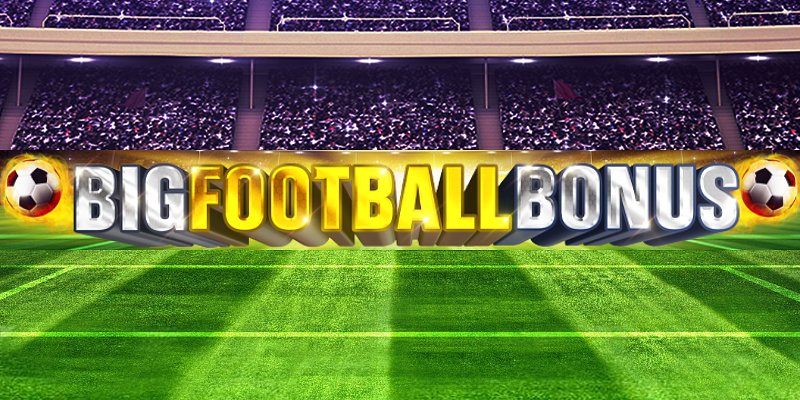 Big Football Bonus is a new casino slot from Inspired released just before the kick-off of the World Cup in Qatar 2022. Grab your football shoes and come with us to a grand stadium where the ultimate match goes down. Collect any of the players for big wins, or even better, the wild burning football, which pays up to 250X the bet for a winline. The football is even better in the free spins, where it becomes sticky and stays in its position for the rest of the feature. This game doesn't have a fixed number of free spins; the feature will go on until the player reaches a sum equal to or greater than a predetermined value.

Big Football Bonus is a video slot from Inspired with 6 reels, 4 rows, and 50 paylines. You can place your money from the Min.bet 0.2 to the Max.bet 20. The RTP is surprisingly low at 95.00%, and the volatility is medium. Playing the best possible football match will end with the max win of 12500X the bet.

You should look out for more than players and balls at this stadium. The features of Big Football Bonus are Wild Symbol, Scatter Symbol, Pick Me Feature, Free Spins, and Spin Chance.

Big Football Bonus takes place at a grand stadium packed with people. We're looking at the pitch from the sideline, and big bright lights are shining over the stadium on top of the stands. Some people in the audience are waving red flags, and there's no music, only the sound of everyone chatting and cheering. The 6x4 grid is placed in the middle on transparent reels with the logo on top. To make a win, you need to land at least 3 of the same symbols on a payline going left to right, starting with the first reel to the left. The game is available on mobile phones and all other devices.

What is the max win in the slot Big Football Bonus?

What features are available in the slot Big Football Bonus?

The Wild Symbol is a burning football appearing anywhere in the base game and anywhere but the first reel in the free spins. It substitutes all regular paying symbols but not the Scatter. Any Wild will become sticky during the free spins and lock in place for the rest of the feature.

The Scatter Symbol is a black and white football saying "bonus." Landing 3 or more anywhere on the grid triggers the Pick Me Feature and then the free spins.

Each scatter that triggers the free spins is transformed into a Pick Me symbol. The player picks each symbol to reveal a value of either 20X, 25X, 30X, 50X, or 100X. The selected value becomes a threshold at which the Free Spins exit. The Free Spins start once the value has been selected.

There is no predetermined number of spins in the Free Spins. Instead, the feature continues until you land a win greater than or equal to the Pick Me value. During the free spins, any wild symbol will stay in its position for the remaining spins.

The Spin Chance is automatically triggered if the player has less credit than the present bet but more than 0. The feature offers the player to wager the remaining credit for a chance to win an extra base game spin at the current bet. If the pointer stops at green, a base game spin is awarded and immediately played. If the pointer lands at red, the player loses the remaining credit. The red and green segments are proportional to the amount of credit in relation to the current bet.

Every time a sports game is released, we usually comment on how rare they are in the slot world. However, we have seen an abundance of Football games lately, most probably boosted by the upcoming World Cup. Big Football Bonus is like most games in the genre, located at a big football stadium with a cheering crowd. The symbols are all related to the sport, except for the lower-paying ones.

The player has quite a lot of opportunities to land wins on the 50 paylines, and the symbols pay decently. Despite that, it's hard to get really excited about this game. It doesn't deliver the same excitement as Football Finals X UP or the same nostalgic feeling as the world-famous star D10S Maradona. Big Football fans can definitely find something they like even here, though, and the game's max win of 12500X the bet is good enough to try it out for a few spins. Another detail that lowers the grade a couple of notches is the RTP of 95.00%, about 1 percentage point below the average slot RTP.

Big Football Bonus takes place at a grand stadium with a cheering crowd and free spins with sticky wild symbols.