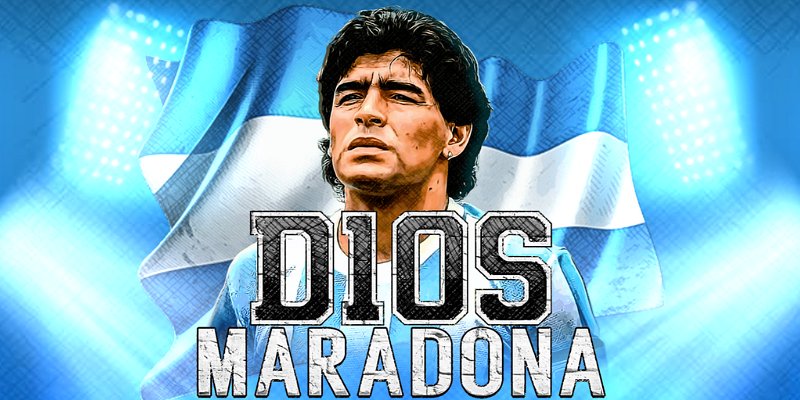 D10S Maradona is a new casino slot from Blueprint Gaming featuring the world-famous Argentinian football player Diego Armando Maradona, who passed away in 2020. He’s by many considered the greatest player who ever entered a pitch, and there’s even a church, the Iglesia Maradoniana, celebrating the football star. The church also calls Maradona D10S, which is the Spanish word for god (díos), written with Maradona’s jersey number, 10. Blueprint has picked up the expression in the game’s most outstanding feature, the D10S Super Spin. It’s time to kick off this game, starring the legend from Buenos Aires.

D10S Maradona is a video slot from Blueprint Gaming with 5 reels, 3 rows, and 20 paylines. The Min.bet is 0.2, and big gamblers might be a little disappointed with the Max.bet 10. Unfortunately, the RTP is pretty low at 95%, but the max win of 50000X the bet is impressive in this game with mid/high volatility.

Whether on or off the pitch, Maradona always has some tricks up his sleeve. Make sure to look out for the features D10S Bet, Wild Symbol, Scatter Symbol, Money Symbol, D10S Scatter Symbol, Cash Collect, and Free Spins.

This game is about one single football player and nothing more. The background has pictures of Maradona wearing jerseys from the Argentinian national team and some of the clubs he played for. The reels have a blue background, and several symbols are the different jerseys the striker wore. Playing along is a tune with trumpets, giving the game a kind of samba vibe. To make a win, you need to land at least 3 of the same symbols on a payline going left to right. All wins must start on the first reel to the left. Maradona is available on all devices such as mobile phones, notepads, and desktop computers.

The lower-paying symbols are J, Q, K, and A. They all pay the same, giving the player 5X the bet for a win containing 5 symbols. The higher-paying symbols are four jerseys representing Boca Juniors, Barcelona, Napoli, and the Argentinian national team. Landing a win containing 5 symbols will award between 7.5X to 40X the bet. The Wild Symbol substitutes all mentioned symbols, but not the Scatter or the Money Symbol.

What is the max win in the slot D10S Maradona?

What features are available in the slot D10S Maradona?

The D10S Bet doubles the chances of triggering the free spins. It will cost you 25% of your bet.

The Wild Symbol is the Argentinian flag. It substitutes all regular paying symbols but not the scatter or the money symbol.

The Scatter Symbol is a picture of Maradona. It can appear on reels 2, 3, and 4. Landing 3 scatters in any position activates 10 free spins.

The Money Symbol is a golden football with a cash value. It can appear anywhere on reels 1, 2, 3, and 4. You can’t use the symbol to make regular wins; it is only of use in the Cash Collect feature, which is triggered by the D10S Scatter Symbol.

The Cash Collect starts as soon as the D10S scatter symbol appears. All visible money symbols will be collected by Maradona. The collection of the cash differs depending on which Maradona appears.

Boca Juniors Maradona = Triggers a respin with all cash symbols and himself locked to their positions. If any new money symbols land, it’s also held while the rest of the reels spin again. The respins continue until no new money symbol lands, and Maradona collects all the money.

Napoli Maradona = Collects all cash in view and awards a cash boost.

Argentina Maradona = Collects all cash in view and multiplies the sum up to 5X.

Landing 3 scatters awards 10 free spins, including the final D10S Super Spin. During the feature, the cash collect feature remains active. Any money symbol landing has its value added to one of four displays above reels 1-4. After 9 spins, the cash symbols are upgraded to show the value on the displays for each reel. The D10S Super Spin starts with s special Maradona appearing on the fifth reel, collecting all money symbols that land on the other reels. The D10S Super Spin finishes the free spins, and it’s not possible to retrigger spins within the feature.

It’s kind of weird that it’s so hard to come across sports slots, considering how big the sports betting industry is. The only other football-related slots released earlier this year that we can come to think of are Sports Bonanza Accumul8 and Spinions Game Day. The first deals with several different sports, and the second is a cartoon-looking football story. This isn’t the first Maradona casino slot, but we can comfortably say that it definitely fulfills its purpose.

Several games use the cash collect feature, and this game serves four different versions of the same feature depending on what jersey the legendary football player is wearing. It’s a very nice way to spice up the feature and make it even more interesting. The free spins are also pretty cool, with the possibility to land really high wins on the last D10S Super Spin. The max win of 50000X the bet seems too good to be true, though, and we doubt any player will win that much. The only thing we don’t like about this game is the RTP of 95%, about a percentage point below the average video slot.

D10S Maradona from Blueprint Gaming is a game entirely focusing on one of the greatest footballers ever, celebrating the different teams he played in.