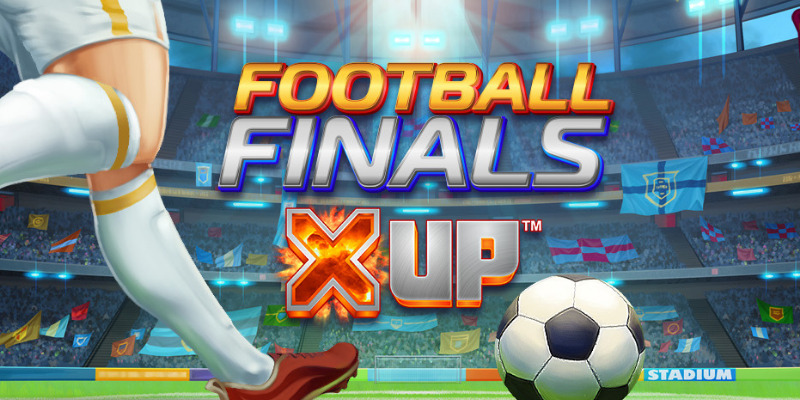 Football Finals X UP is a new casino slot from Alchemy Gaming where we enter the football pitch just in time for the World Cup. It’s hard to imagine that anyone has missed out on the World Cup build-up. Not only is it covered in the news, but the iGaming Industry has also made sure to capitalize. We’ve seen a bunch of football-themed slot games come out lately, with Yggdrasil releasing Firekick! Multimax and Kalamba giving it a go with Football Blast. It’s needless to say that football fever is spreading, and we’re here to reap the benefits! Let’s take a look at the game.

Football Finals X UP is a video slot from Alchemy Gaming that features 5 reels and 3 rows. Instead of using standard paylines, the game pays in 243 ways, which means that you only need to land symbols on consecutive reels, and not in a specific line. You can choose between a Min.bet of 0.10 and a Max.bet of 20. Football Finals X UP is played with an RTP of 96.22% and medium volatility, offering a max win of 10.000x the bet.

To help you score in this grand stadium, Alchemy provides you with some great features. The features are Wild Symbol, Scatter Symbol, X UP Feature, Free Spins, and Bonus Buy.

The game takes place in a majestic stadium with a packed crowd. You can see various flags in the stands, perhaps representing different countries or teams. The match is played under a clear night sky, which is the best condition possible for a thrilling game. Instead of going for generic crowd roars and whistles, a rock tune beats in your ears. That might sound a bit off-theme, but it really gets your blood pumping, getting you excited for what’s to come.

The game can be played on all common mobile devices and desktops. A winning combination is created by landing 3 or more matching symbols on consecutive reels, starting from the leftmost reel.

The lower-paying symbols are made up of 10, J, Q, K, and A. Five-of-a-kind with these will pay 1x-1.5x the bet. The higher-paying symbols embrace the theme, including footballs, players, and supporters. A full line of 5 with one of these pays 2x-4x the bet. A golden trophy, closely resembling the one given to the winners of the World Cup, acts as the Wild symbol. The X UP symbol is the key to unlocking the Free Spins feature, making it this game’s Scatter symbol. Now, let’s take a look at the features!

What is the max win in the slot Football Finals X UP?

What features are available in the slot Football Finals X UP?

If you land part of a Wild symbol, it expands to fill the reel. The Wild substitutes for all other paying symbols.

Like in most games, landing 3 Scatter symbols triggers the Free Spins feature. In addition to that, you’ll be progressing on an X UP ladder by landing 2 Scatters. This works wonders as a consolation prize when you miss the 3rd scatter.

The X UP Feature is a progressive system in which you climb a ladder by landing 2 Scatters. It’s an interesting mechanic since it actually makes you want to miss a few Scatter draws in order to trigger the Free Spins with a higher multiplier. Each time you land 2 Scatters, you climb the ladder and increase the multiplier for the next Free Spins feature. After you’ve played through a bonus, the ladder will reset. Thus, it’s beneficial to climb it before landing 3 Scatters. The first step of the ladder is a 2x multiplier, and the last one is 10x. If you manage to get to the top, the Free Spins are awarded automatically.

Landing 3 Scatters in base game triggers the Free Spins feature. 2 or more Scatters during the feature give you an additional 2 spins. The multiplier you are awarded is based on the current ladder progression, but you can increase it by landing Scatters in the bonus. When entering the bonus game, you can choose to activate a higher multiplier at a calculated cost. The higher you are on the ladder, the lower the cost.

For the impatient, there’s a way to jump straight into the Free Spins feature. It comes at a cost of 60x the bet and starts with a random multiplier between 1x-10x.

At Aboutslots, we love innovation. The X UP feature is just that. Although Alchemy has used it before, in Bolt X UP, for example, it still feels refreshing. It’s one of the first features that a provider has managed to implement that keeps you from getting annoyed by missed draws. Funnily enough, you might be upset if you actually land it instead.

Although innovative, there’s not a whole lot of excitement other than the Free Spins in this slot. It doesn’t have any base game features, so you basically just sit there, waiting for the Free Spins feature to trigger, but also, you don’t want it to…it’s odd.

This is not a revolutionary slot by any means, but the X UP feature is tons of fun. We often question why sports-themed games are so dull, but we don’t feel the need to here. It’s a simple yet enjoyable game that is definitely worth a try!

Football Finals X UP by Alchemy Gaming gets you excited for the up & coming World Cup with its X UP feature and a potential max win of 10.000x!