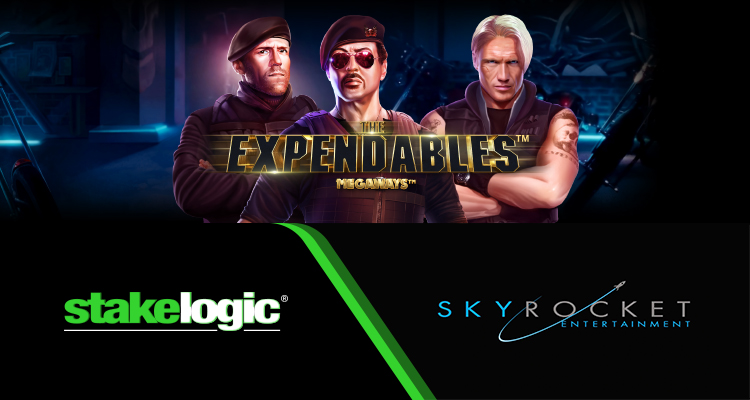 The Expendables Megaways from Stakelogic

Schedules for the 20th of February, The Expendables Megaways slot running on the Stakelogic software is an interesting, feature-packed release inspired by one of the most popular movie franchises of the same name. The Expendables is an action thriller movie franchise distributed by Lionsgate, created by David Callaham and starring Sylvester Stallone.

The movie franchise was actually created to pay tribute to the biggest action stars of the 1980s and 1990s. The series features three titles including released in 2010, 2012 and 2014. When it comes to The Expendables slot game, it comes packed a rather unusual gaming grid with 6 reels, 2 to 7 rows and finally 117,649 paylines.

The game’s RTP is 96.02% while it features high volatility spinning actions and super rewarding winnings worth over  20,000x players’ stake. It also comes packed with a wealth of bonuses including its Unlimited Free Spins Multiplier, Expendables Feature, and Bullet Bonus. Before the game is released, there is a variety of other Stakelogic titles to explore such as Super Wild Megaways, Space Stallion, Mystical Santa Megaways, Black Gold Megaways and Book of Charms Quattro.

The Expendables Megaways: Join a Band of Aging Soldiers

As previously mentioned, The Expendables Megaways slot revolves around a crew of aging soldiers who come together for one more mission, which is probably their last mission. In terms of its looks, the game features an interesting military vibe to match the movies’ premise. Across the reels, there are lower-valued royals and standard playing cards as well as cast members including Jet Li, Dolph Lundgren, Terry Crews, Jason Statham, and Sylvester Stallone. The latter is the most rewarding symbol paying up to 12,5x players’ stake.

The Expendables Megaways slot features dog tag wild symbols that replace other symbols on the reels. Since the game uses the popular Megaways gaming engine, the number of symbols on every reel varies with each spin. Depending on how many symbols are active, the game features between 324 and 117,649 paylines. Landing any winning combo removes those winning symbols while new symbols take their place.

Onto the game’s bonuses, the first one is its Bullet Bonus mode. Every time players land a special bullet symbol, it gets collected in a power meter located on the main gaming screen. Once players fill this meter with five bullets, the Bullet Bonus is active. The bonus adds five wild symbols randomly across the reels while a new payout is followed.

As soon as players land at least four or more scattered skull symbols in any position on the reels, The Expendables Megaways slot’s Free Spins bonus is activated. Once here, players get 10 free spins that come attached with a 1x winning multiplier. After every free spin, this multiplier can increase up to 5x or remain the same. During this bonus mode, players can also remove one collection of lower-valued symbols and play with only higher-valued symbols which mean enjoying better payouts.