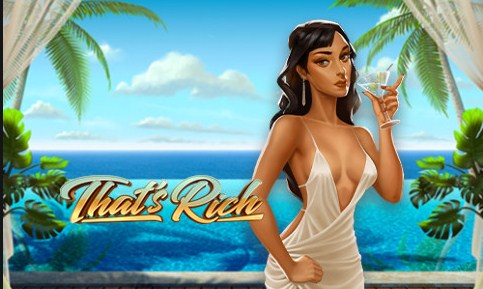 The life of the famous and wealthy is once again under the radar by Play'n GO in its upcoming game, That's Rich slot. Living a luxurious lifestyle is doubtlessly dream come true for many of us and this is exactly what players can expect from the That's Rich slot whose mega rewarding bonuses bring mega generous winnings which go up to 10,000x players' initial stake.

While the game is not the most innovative nor the most unique players will come across, it still delivers an entertaining online gaming experience across all gaming devices. The That’s Rich slot does not fail to impress with its visuals and graphics which as expected from Play’n GO are rather spectacular even though they are fairly simple.

Over the years, Play’n GO has introduced many games that share the same theme as its That’s Rich slot such as Coywolf Cash which takes players on an amazing cash hunt, and Cash Pump which delivers highly volatile spinning actions with super rewarding bonuses.

The That’s Rich slot features a standard gaming grid featuring 5 reels and 10 paylines. The game is available across all devices from 0.10 up to 100 credits per spin. As previously mentioned, the game is all about luxury and wealth with a private cruise balcony forming the game’s backdrop. The game’s symbols including yachts, luxury mansions, designer shoes, and bags set the tone of the game which matches its theme.

The most rewarding symbol featured here is a female character depicted on a magazine that pays up to 50x players’ stake for five of a kind winning combos. These symbols are also the game’s wild symbols which do not only replace other symbols on the reels but also expand to bring fully wild reels.

The That’s Rich slot comes packed with three bonus features. First of all, there is an excellent Win Spins mode during which players benefit from up to twenty Win Spins. These are basically free spins, but they come with guaranteed winnings. Moreover, scatter symbols that appear during this bonus increased the overall wild winning multiplier to up to 20x players’ stake. To trigger this bonus, players need to land at least three or more scattered trophy symbols in any position on the gaming grid.

The bonus starts with five free spins while landing extra scattered trophy symbols brings extra Win Spins. Furthermore, there is the That’s Rich slot’s Expanding Wilds bonus which triggers when the celebrity female wild symbol appears on all five reels. It is important to mention that during the That’s Rich slot’s Win Spins bonus, expanding wilds are also active.

Wild Winnings Thanks to Wild Multipliers

Those who are interested in exploring the life of wealthy and famous will have to wait until the 9th of April when the game will be released across Play’n GO online casinos.