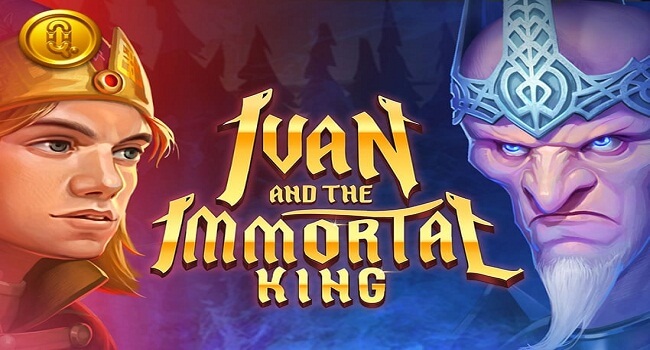 The new Quickspin slot release from this December, Ivan and the Immortal King is a slot game based on the Russian folklore story hero Ivan Tsarevich, in which he is struggling to defeat Koschei, the immortal king.

In this Quickspin interpretation, players will take the role of Ivan, who is “neither strong nor smart”, but has a great luck which he will need in order to defeat Koschei and claim the treasures. Ivan has to get to Koschei’s soul which is hidden from his body inside a needle, which is in an egg, which is in a duck, which is in a hare, which is inside a chest. To get the big treasure, you need to unlock the chest and break the needle.

This slot has the same classic characteristics as most Quickspin slot games, so all players who like their slot games will like this one two. The difference is that Ivan and the Immortal King slot has a new math model and the max win potential is much bigger on this one than on the old Quickspin slots.

Ivan and the Immortal Kins slot is a 5-reel, 3-row slot with 20 lines and has bets between 0.20 and 100 EUR. The main focus on this slot is the randomly triggered Baba Yar feature and the free spins feature that has a level-up multiplier and has a lot of potential.

A player can get the free spins feature by landing 3 or more scatters anywhere on the reels. This can happen either directly in one spin or with the help of Baba Yaga.

Ivan and the Immortal King slot has a 96,29% RTP and it is a high variance slot game with over 10,000x potential in the free spin feature.