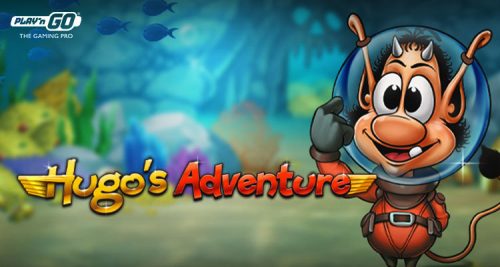 One of the most popular online slot series based on the friendliest troll continues with the Hugo’s Adventure slot powered by the Play’n GO software. This is the fourth installment in the Hugo series featuring a great mixture of neatly rendered cartoonish characters, appealing visuals and rewarding bonuses.

The Hugo’s Adventure slot is packed with 5 reels and 10 paylines boasting awesome maximum payouts worth up to 5,000x players’ stake. The game’s RTP stands around 96.53% which is another huger plus. In terms of its bonuses, the Hugo’s Adventure slot does not fail to impress as it comes packed with unusual Flying Wilds, an interesting Underwater Feature and loads of Air Ace Free Spins.

Apart from being packed with rewarding bonuses, the game also looks beautifully rendered packed with high-quality visuals which are more on a cartoonish side matching the game’s theme. There is an excellent collection of Play’n GO-powered games worth checking out such as Rich Wilde and the Pearls of India, Fortune Teller, Wild North, Leprechaun Goes Wild, Tower Quest, Jade Magician, Hugo, Gemix, Crazy Cows, Hunt for Gold, Pearl Lagoon, Riches of Ra, Energoonz, Reactoonz, Jazz of New Orleans, Aztec Idols and Rage to Riches.

Hugo’s Adventure: Venture into the Magical World of Riches

With the very first spin on the Hugo’s Adventure slot, players actually venture into the magical world off troll creatures led by our favorite character Hugo and his friends. Looks-wise, the slot looks amazing packed with the same cartoonish visuals and graphics as enjoyed in other games including Hugo, Hugo Goal and Hugo 2. However, the backdrop setting is different from the other releases as it is set in the air as in this game, Hugo is a pilot.

On the reels, players will come across standard card suits and higher-valued bird pilots, monkey engineers and troll stewardesses. Hugo is the game’s wild symbol which as expected replaces other symbols except the game’s scatter. Moreover, landing five of a kind Hugo winning combos brings winnings worth up to 50x players’ stake. The Hugo’s Adventure is a highly volatile game and it comes packed with very intense gameplay.

As previously mentioned, there are two bonus modes offered in the Hugo’s Adventure slot including the game’s Underwater Adventure mode which activates as soon as two scattered submarine symbols land on reels four and two at the same time. Before this bonus mode starts, players also spin a massive submarine that eventually gives up to three hearts. Then, players get to pick underwater treasures which can reveal rewarding cash prizes or take away one heart.

Once this bonus feature is over, players also receive one spin on the rewarding submarine winning multiplier for every remaining heart. With this bonus, players can accumulate an awesome winning multiplier which is worth up to 20x their stake that gets applied to their winnings from the Underwater Adventure bonus.

Then, there is also the Hugo’s Adventure slot’s Air Ace Free Spins bonus that players trigger with three scattered airplane symbols landed on reels five, three and one. Once here, they receive 9 free spins and one heart while colorful balloons that come across the reels add extra hearts to their total. Eventually, players can scoop a great 16x winning multiplier. Moreover, this bonus introduced Flying Wilds which as suggested move across the reels.