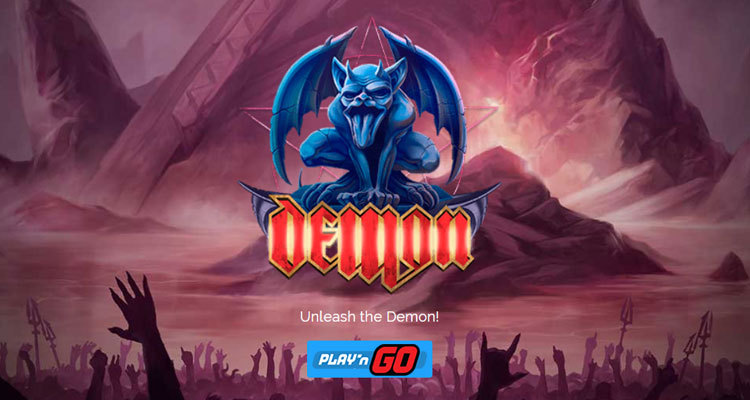 The Demon slot powered by one of the leading brands in the industry, Play’n GO comes packed with 5 reels, 30 fixed paylines and loads of bonuses for winnings that go up to 2,500x players’ stake. With the very first spin on the game, players hop on a remarkable, high-variance spinning action whose RTP of 96.50% is rather favorable. The Demon slot can be accessed via every device including portable devices from 0.30 all the way up to 90 credits.

Before its official release, the game has made a lot of noise and once it is officially released, it surely rocks quite hard. The game is inspired by one the UK-based bands of the same name which was formed back in 1979 by Dave Hill and Mal Spooner. The band has been active for years now rocking the heavy metal scene with its albums including The Plague, The Unexpected Guest, Night of the Demon and others.

The band is considered one of the most important bands in the British heavy metal new wave movement, so there is no wonder why Play’n GO was inspired by its work. It should be noted that this is another branded company’s release inspired by heavy metal bands as the company has also released its Sabaton slot relatively recently.

As previously mentioned, the Demon slot features highly volatile spinning actions with several interesting bonus features to take advantage of such as its Free Spins bonus, symbol transformations and other. In terms of its visuals, the game has an interesting infernal vibe with its reels set within the hell gates while its transparent reels show a massive wall pentagram and a crew of demonic creatures. Naturally, these demonic creatures are ready to rock out to the band’s songs.

What is even more, players can choose from seven different songs included in the jukebox in addition to a song named The Devil Rides Out which was recorded just for the purpose of this game. When it comes to the game’s symbols, players will come across the least valuable royals which appear alongside female stone statues, gargoyles, masked demons, crosses and of course the band’s singer himself that brings winnings worth up to 10x players’ stake for five of a kind combos.

During their gaming sessions, players should definitely keep an eye on the wild Baphomet symbol which lands on the third reel and replaces other symbols. These symbols also deliver maximum payouts worth 16,67x players’ stake for five of a kind combos. What is even more, landing these symbols also triggers the game’s Wild Mask bonus during which all of the lead vocal symbols landed on all reels become wild symbols for the current spin.

More rocking action comes during the game’s Free Spins bonus that players trigger with landing the special wild amulet symbols on reels one and five and with landing the wild symbol on the third reels. Once here, players receive 6 or 11 free spins while generous up to 8x winning multipliers apply as well. In addition to this Free Spins bonus, the Demon slot also comes packed with its Hell Spins bonus that features more generous 16x winning multipliers.

In order to trigger this bonus mode, players need to land both of the special wild amulet symbols on reel one and five. The bonus mode starts with between four to eight free spins while more free spins can be scooped once the bonus starts.