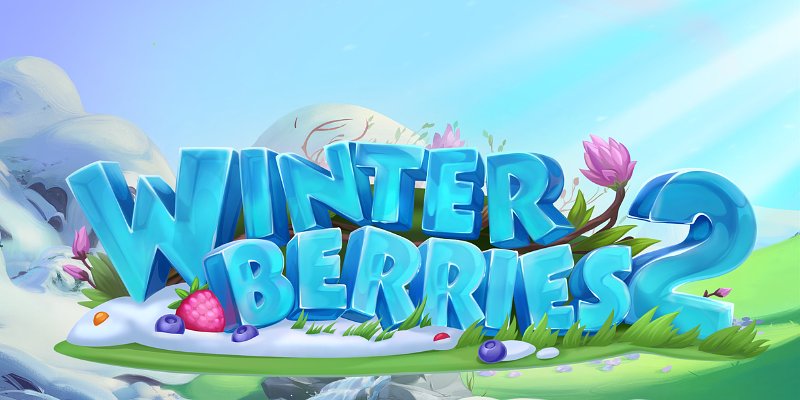 Winterberries 2 is a new casino slot from Yggdrasil, following up on the game developer's previous game Winterberries. A lot is familiar, but you'll also find several new things in this update. The volatility has been turned up from low to super high, and there's an extra sixth reel that can be activated by a Golden Bet. The Golden Bet doubles your chances of triggering the free spins and can produce bigger wins by landing 6 symbols of the same kind. The freezing symbols, which give you a respin on every win, are still in use, and the reels' multipliers have been upgraded with higher numbers than in the previous game.

Winterberries 2 is a video slot from Yggdrasil with 5 reels that can be expanded to 6 with the Golden Bet. There are 3 rows and 20 paylines, no matter if you're playing on 5 or 6 reels. The Min.bet is 0.1, and the Max.bet is 40. The game's RTP is exactly 96%, and the volatility is described as super high. Scooping up the max win will give you 10000X the bet, and the hit frequency of 25.73% means that about every fourth spin equals a win.

A winterberry, or ilex verticillata as it's called in Latin, is a berry growing on the East coast of North America, from Newfoundland to Alabama. It grows particularly in wetlands but also on dry sand dunes and grassland. The berries grow on a shrub, and they were used by Native Americans for medicinal purposes. Winterberries 2 has several berries, but none of them seems to be a winterberry. They appear on dark blue reels on top of a tree with a few pink leaves. To the left of the tree is snow, and to the right is green grass.

To make a win in this confusing landscape, you need to land at least 3 of the same symbols on a payline going left to right. You can either play the regular game with 5 reels or add a 6th reel by activating the Golden Bet. Using the Golden Bet increases the chances of triggering the free spins, and it can also produce bigger wins since 6-of-a-kind wins pay more than 5-of-a-kind wins. All wins must start on the first reel to the left, and you can play the game on desktops, notepads, and mobile phones.

The lower-paying symbols are clubs, diamonds, hearts, and spades in leaf-like formations. They all pay the same, giving you 4X the bet for a 6-of-a-kind win. The higher-paying symbols are blueberry, gooseberry, cloudberry, and raspberry. Landing 6-of-a-kind with any of them pays between 18X and 30X the bet. The Wild Symbol substitutes all mentioned symbols but not the Scatters.

What is the max win in the slot Winterberries 2?

What features are available in the slot Winterberries 2?

The Wild Symbol substitutes all symbols except the 3 Scatters.

The Golden Bet is activated by paying 50% extra of your stake. It unlocks the 6th reel, doubling the chances of activating the free spins, and enables landing 6-of-a-kind wins.

You start the Free Spins with between 10 and 20 spins depending on the number of triggering Scatters. The Multipliers are doubled from the start, and they can increase even more by landing Scatters.

Winterberries 2 is a big update from the previous game, especially when it comes to the volatility that has been raised from low to super high. With that also comes a quadrupled max win from 2500X to 10000X the bet. Most players will probably see this as an upgrade, while some might prefer the slower tempo in the first game, where the chances of winning big are slimmer, but also the risk of losing big.

The game looks good without being groundbreaking, and the landscape that is half winter and half summer or spring appeals to the eyes. The fact that none of the berry symbols don't grow in the winter doesn't matter that much. The Freezing Symbol feature is kept from the first game, and it's great to have one or several respins on every win. The multipliers connected to the freezing reels have also been upgraded generously. The free spins start with a 64X multiplier on the 6th reel that can grow even more by landing Scatters.

That is if you're playing on all 6 reels, though. If you don't use the Golden Bet, you'll only spin the first 5 reels. We think it's worth paying for the Golden Bet since it doubles the chances of triggering the free spins and opens for bigger wins. For an even colder winter experience, you can check out Wins of Winter, which has an interesting setup of changing rows going 3-4-5-4-3.

Winterberries 2 from Yggdrasil spices up the berry game by raising the max win and volatility while keeping the highly appreciated Freezing Symbols feature.