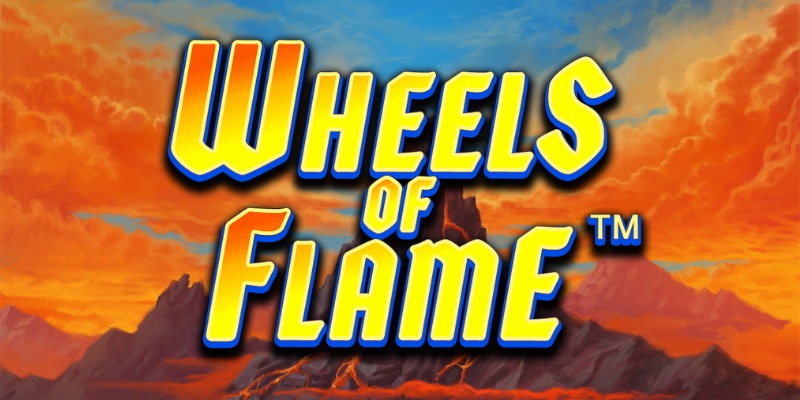 Wheels of Flame is a new casino slot from Playtech where we get to spin the fiery wheels of the phoenix in an action-packed experience. According to Greek mythology, the phoenix is an immortal firebird that is reborn from its own ashes once it dies. Slot enjoyers should be no strangers to this magnificent creature, as it’s present in many games, such as Phoenix Reborn and Firebird Spirit.  Although primarily known from Greek mythology, phoenix-like creatures are told about in many cultures. An example of this is Quetzalcoatl, a multifaceted serpent god in Mesoamerican religions, also featured in one of 2020’s most successful slot releases, Beat The Beast: Quetzalcoatl’s Trial. Enough with the fun facts, let’s take a look at Wheels of Flame!

Wheels of Flame is a video slot from Playtech that features a setup of 5 reels, 4 rows, and 30 paylines. Players can choose between a wide range of bet sizes, with a Min.bet of 0.10 and a Max.bet of 500. The game has a default RTP of 95.56%, but casino operators can also choose from lower variants of 93.48% and 87.97%, so it’s certainly worth checking that out before playing. Lastly, Wheels of Flame offers mid-high volatility and can net you a max win of over 1000x the bet.

There are plenty of intriguing mechanics to be found within the wheels. The features are Wild Symbol, Flame Symbols, Wheels of Flame, Free Spins, and Feature Bet Mode.

The game’s design is a bit unclear at first. According to legend, the phoenix lived in the desert. However, all we have in base game is some sort of mural, so it’s not until the Free Spins we realize that we are, indeed, in the desert. We’re not a huge fan of these sort of plain backgrounds, as they don’t allow us to soak in the atmosphere and environment in the same way. Nonetheless, the game does look quite good. The constantly spinning wheels above the grid and the animated flame symbols help create a neat experience, making the game less dull than it could’ve been.

Wheels of Flame can be played on all common mobile devices and desktops. A winning combination is created by landing 3 or more matching symbols on consecutive reels within the game’s lines, starting from the leftmost reel.

The lower-paying symbols consist of J, Q, K, and A. A full line of 5 with one of these pays 2.5x the bet. The higher-paying symbols include necklaces, rings, crowns, phoenix eggs, ladies, and phoenixes. Five-of-a-kind with these pays 3.5x-15x the bet. Wild symbols can substitute for any of the symbols mentioned above. Symbols can also have flames behind them. Landing 3 of these in a row triggers the Wheels of Flame.

What is the max win in the slot Wheels of Flame?

What features are available in the slot Wheels of Flame?

Landing 3 or more Flame symbols in a row activates the Wheels of Flame.

There are 3 different Wheels of Flame, green, blue, and red. Landing 3, 4, or 5 Flame symbols in a row activates the green, blue, or red wheel, respectively. When triggered, you’ll get to spin the wheel, which can award Free Spins, a respin with added Wilds, Cash prize, or a spin on the next wheel. The different awards will be better or worse depending on which wheel you spin, with green being the worst, blue second, and red the best. The maximum awards on the red wheel are as follows:

During Free Spins, you have a higher chance to land Flame symbols to trigger the Wheels of Flame.

The Feature Bet Mode can be activated at an extra cost of 100% your bet, doubling the chance of landing Flame symbols.

Playtech is a tough provider to evaluate, as they don’t seem to have a specific type of games, but that also makes it a lot of fun to test their games out.

The only issue we have with their games is the design and UI. They don’t look bad, but the quality doesn’t feel quite up to date. Instead, the games have more of a land-based look, which makes sense since that’s a department Playtech has a lot of experience in. It does, however, make the games look a bit outdated. On the other hand, Playtech’s games are very popular, so it’s all subjective.

Gameplay-wise, the game holds up a lot better. It’s not revolutionary or groundbreaking, but it’s fast-paced and has some solid potential. The Flame symbol mechanic is a lot of fun, adding an innovative touch to the game, but we wish they would’ve done something more with it. The Free Spins follows that same pattern. It has more Flame symbols, which makes it exciting, but it stops there. Perhaps some sort of multiplier or alike? Overall though, we enjoyed Wheels of Flame, but it feels somewhat incomplete.

Wheels of Flame by Playtech takes us on a thunderous journey with a phoenix featuring a flaming feature wheel.