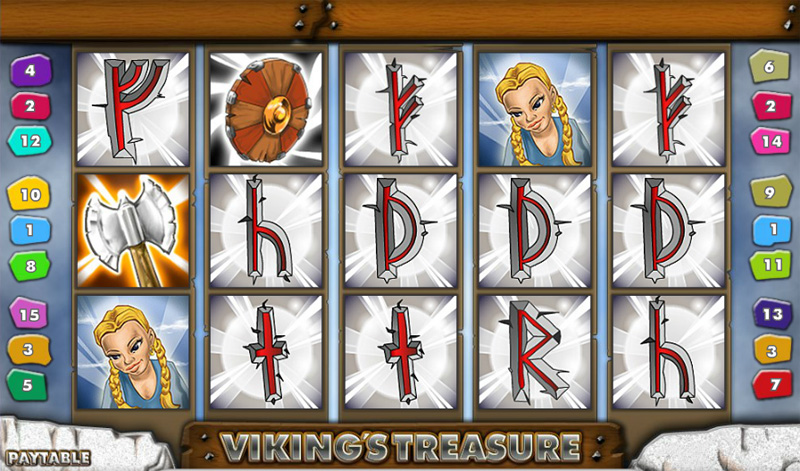 Viking's Treasure is an older slot
game featuring a Viking theme as the name suggests. The Viking's treasure slot
has 5 reels, and 15 paylines and it was developed
by
. With simple graphics and a few
animations, it will bring some basic
Viking elements. With a Viking ship, an axe,
and a helmet get ready to sail out and find some treasure. In this cold
terrain, you will find some features which may prove to be quite lucrative.
Therefore, try your luck and join the Viking's Treasure crew in a treasure
quest.

VIKING
PIRATES ON A TREASURE QUEST

Get on a Viking ship and start your
treasure hunt. With a helmet, a shield, and a girl by your side, you'll be more
than ready. Even though waters in the
North are cold as ice, there will be a few things to look forward to when it
comes to this slot.

The dominant grey color on the reels
reminds of ice and generally of a tough life Vikings
led. Graphics paint a pretty simple picture of Viking pirates with weapons and
a boat, getting ready to start a journey in search of some gold.

There are also some Viking runes with
a combination of red and grey color,
adding to the theme featuring, according to the legend, bloodthirsty barbarians
from the North.

The Wild Viking symbol with clenched
teeth will show courage and it will help with forming the winning lines. When
the reels stop turning, this Viking Wild truly
becomes Wild with the sound in the background reminding of wind, ghosts in the
night, and metal scraping. There is also a Scatter symbol, a hand holding some
gold coins.

WITH A HAND
FULL OF COINS THE REAL FUN BEGINS

The Viking's treasure slot offers
some solid features with Wild and Scatter symbols. The Wild Viking symbol can
replace any symbol except the Scatter, and if this symbol is included in a paying
combo, you will get a double win.

TRY YOUR
LUCK WITH VIKINGS

has
simple and pretty basic graphics with a little sound thrown into the mix
reminding of cold, dark, and lonely
nights. With animations brought to a minimum and with scarce sound input, this
game will leave you in a state of doubt.

But with a Wild symbol value, this
situation will be a bit rectified. The Wild Viking symbol will substantially add to your coin collection when
it lands into winning combinations, and with the Scatter symbol, this game improves even more.

Grey reels with red Viking letter
symbols, surrounded with white and grey, give an idea of the Viking way of
living. They tell us a story about hard life in the cold Viking lands and people there with great
survival skills.

All in all, if you are a fan of
old-school games, give the Viking's Treasure slot a chance. Despite this being
an older game, you won’t be disappointed.