Treasures of the Dead 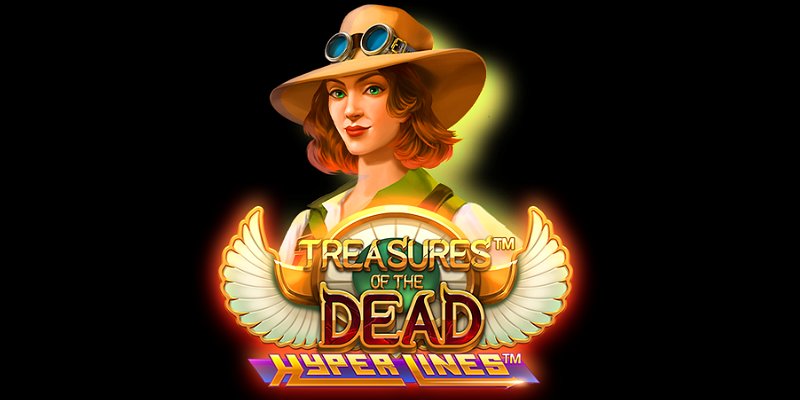 Treasures of the Dead Slot Overview

Treasures of the Dead is a new casino slot from Lucksome with the adventurer Amber Wild going on a quest for magical scarabs. In this Egyptian-themed story, they are the key to the lost Treasures of the Dead. Collecting scarabs in the base game can activate HyperLines, three additional winlines with progressing multipliers. Best of all is that the HyperLines stay active until you score a win on them, and the multipliers can keep on adding up during that time. When you get to the free spins, the HyperLines will be active during every spin, giving you even greater chances of scooping up some huge wins.

Treasures of the Dead is a video slot from Lucksome with 5 reels, 3 rows, and 10 paylines plus 3 HyperLines that can be activated by collecting Scarabs. The Min.bet is 0.1, and the Max.bet is 50. Treasures of the Dead has an RTP of 96.21%, and the volatility is mid/high (7/10). Landing the max win adds up a nice 15000X the bet on your account, and the hit frequency of 24.57% means that almost every fourth spin is a win.

When you’re hanging out with Amber looking for treasures, you should also keep an eye open for the features Wild Scatter Symbol, HyperLines, Free Spins, and Bonus Buy.

Treasures of the Dead Slot Information

Get ready to meet Egyptian pharaohs and other ancient things in this adventure. We ended up in a palace with grand pillars, sand-golden ceilings and walls, and green plants in clay pots. The reels are also sand-golden, and on the left side are three holes on every row, where collected Scarabs end up when they’re collected in the base game. The music is mystic with chanting lyrics, and you make a win by landing 3 or more symbols of the same kind on a payline, starting with the first reel to the left. The game is available on desktops, notepads, and mobile phones.

Treasures of the Dead Slot Features

What is the max win in the slot Treasures of the Dead?

What features are available in the slot Treasures of the Dead?

The Wild Symbol is a book that sometimes has a Scarab on it. It substitutes all symbols and also works as a Scatter Symbol, triggering the free spins if you land 3 or more anywhere on the reels. If the Wild has a Scarab, it will fly to one of the holes left of the reels for the HyperLines collection. If the Scarab lands on an already activated HyperLine, it flies to the right of the reels and increases that HyperLine’s multiplier. The Wilds also pay on their own, the same amount as Amber Wild, up to 200X the bet for a win.

There are 3 HyperLines going from left to right on the first, second, and third rows. Landing 3 Scarabs on a HyperLine while spinning in the base game activates that specific HyperLine, and it stays active until you land a win on it. Landing Scarabs on an active HyperLine raises that line’s multiplier, which is displayed to the right of the reels. The HyperLines feature is triggered once in 40 spins on average.

Whenever you land a win on a HyperLine, the standard pay is multiplied by the current multiplier of the HyperLine. A HyperLine only deactivates when a win is made on it, and there are no more remaining Scarabs. In the free spins, every spin is played with all three HyperLines activated.

One of the regular symbols will be randomly picked as a Special Expanding symbol before the Free Spins start. That symbol will expand and cover all positions on a reel every time it shows up. Special Expanding symbols don’t need to be on adjacent reels to make a win. The Free Spins start with the same number of Multiplier Scarabs as the number of triggering Scatter Symbols. The first 3 are distributed evenly, and any remaining randomly.

Apart from standard wins and HyperLine wins, the HyperLines apply their respective multiplier for winning combinations of Special Expanded symbols. Landing 3 Wild Scatter Symbols in the Free Spins triggers 10 extra spins. The feature ends when the player runs out of spins or the max win of 15000X the bet is reached.

Treasures of the Dead Slot Conclusion

Treasures of the Dead is an action-packed adventure with our hero Amber Wild. The HyperLines feature is a really nice addition to the game, which we assume will appear on more games from this provider. You activate a line by landing 3 Scarabs on it during the base game spins. Once it’s activated, it stays like that until you land a win on it. Every Scarab landing in the meantime will increase the HyperLine’s multiplier, so it can actually be really lucrative not to land a win on a HyperLine for a while. In the free spins, all three HyperLines are active all the time, and their multipliers grow for every Scarab that appears.

There’s no surprise that the Wild Symbol is incredibly valuable since it’s also the Scatter, triggering the free spins. It’s also the symbol that sometimes brings the Scarabs. The volatility of Treasures of the Dead is mid/high, which makes the max win of 15000X the bet really good. Another game with a female adventurer in Egypt is Cat Wilde and the Pyramids of Dead. It has a little lower volatility and also a smaller max win of 10000X the bet. A more spaced-out Egyptian adventure is Guardians of the Pyramids, where you’ll find an incredible amount of 6 million ways to win.

Treasures of the Dead from Lucksome is an Egyptian adventure where you can activate extra valuable HyperLines with multipliers multiplying your wins.