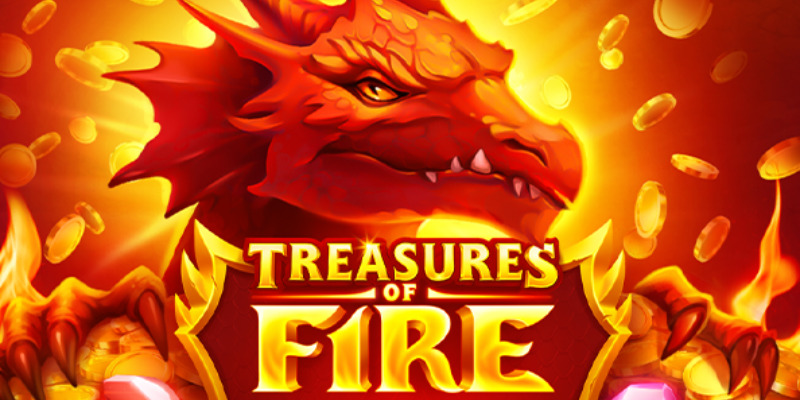 Treasures of Fire is a new casino slot from Playson in which we visit a dragon protecting a sea of gold deep down his lair. It’s hard not to think of Smaug from The Lord of the Rings when looking at Playson’s creation. Tolkien has inspired many stories and games, and we are sure that whoever came up with this idea has read or watched the Hobbit adventures. Oddly enough, dragons are not that common in slot games. They’ve appeared in games such as Golden Dragon Inferno, and Red Tiger had a hit with Dragon’s Fire Megaways. Despite all of that, most players wouldn’t associate slots with dragons, which is peculiar considering the industry normally draws a lot of inspiration from books and fantasy. Perhaps, Playson can turn it around with Treasures of Fire. Prepare yourselves; this is not for the faint of heart.

Treasures of Fire is a video slot from Playson with 5 reels and 6 rows. Instead of conventional paylines, all you need to do is land 8 or more identical symbols anywhere on the grid to form a winning combination . This phenomenon is called Scatter Pays mechanic. Players can choose between a Min.bet of 0.20 and a Max.bet of 100. The game has an RTP of 95.51%, placing it slightly below the industry average. Lastly, Treasures of Fire’s high volatility can result in a max win of 20.000x the bet.

Taking on a dragon takes some serious courage. Thankfully, Playson has equipped up with some great mechanics to simplify our adventures. The features are Scatter Symbol, Collapsing Symbols, Multipliers, Free Spins, and Bonus Buy.

The game takes place in a lair, where the protagonist can be seen lying on a pile of gold, watching your every move. The setting reminds us of the Great Hall of Thráin, but also of Dragon’s Fire by Red Tiger. These surroundings fit perfectly for a slot by creating a thrilling atmosphere. To create the ultimate fantasy, see the dragon as a casino, and imagine that it’s their treasure that you’re attempting to steal. Adventurous music completes the theme, which we think Playson has nailed.

Treasures of Fire can be played on all common mobile devices and desktops. A winning combination is created by landing 8 or more matching symbols anywhere on the reels.

The lower-paying symbols include gems in the colors red, green, blue, and purple. Eight-of-a-kind with one of these will pay 0.4x the bet. The higher-paying symbols are made up of dragon eggs colored red, green, blue, purple, and golden. Landing 8 of one of these will pay 1x-8x the bet. The dragon’s eye is a Scatter symbol used to trigger the Free Spins feature. Let’s take a closer look at the features!

What is the max win in the slot Treasures of Fire?

What features are available in the slot Treasures of Fire?

Every spin, paying symbols can have multipliers attached to them. These will have a random value from 2x to 100x. The multiplier is activated when a symbol with a multiplier attached participates in a winning combination, and is applied to the total win. In case of several multipliers, their values add up.

During Free Spins, the dragon can breathe fire randomly. This grants additional multipliers to symbols, increasing the potential greatly. Fire breaths can only be activated in winning spins, so you won’t have the annoyance of getting no hits when it is triggered.

Although not stated, we certainly received more multipliers on normal spins during Free Spins than in the base game when we tested this out.

If you want to jump straight into some Free Spins action, you can do so by buying it for 100x the bet. This will award you a trigger with 3 Scatter symbols.

J.R.R Tolkien once said, “It simply isn’t an adventure worth telling if there aren’t any dragons”, and we won’t argue with the legend himself on that point. Dragons are majestic creatures that help create grand settings, and we think that they deserve a bigger spotlight in the iGaming industry. Ancient civilizations, gods, and fish make up some of the most popular slots out there, so we will stick our necks out there and say that providers should use dragons more.

So did Playson pave the way for dragons with Treasures of Fire? Perhaps not, but it’s certainly an exciting game. We appreciate that Playson has made multipliers available in the base game and not only during Free Spins. This creates an engaging experience where potential isn’t exclusive to a specific feature but exists in all parts of the game.

At Aboutslots, we rate innovation highly, and our opinion is a bit split on that matter. The grid and the multiplier mechanic are similar to those of Gates of Olympus and Sweet Bonanza, but it certainly doesn’t feel like a re-skin. For one, the multipliers are attached to symbols, thus not taking up any space. Furthermore, the dragon’s breath is excellent since it guarantees some multipliers when it occurs.

All in all, this is an enjoyable game that Playson has done well with. A better RTP would have taken it up a notch, but other than that, we don’t have a whole lot of complaints.

Treasures of Fire by Playson takes you to a dragon’s lair, and you’ll have to fight the mighty dragon as he protects a pile of gold!