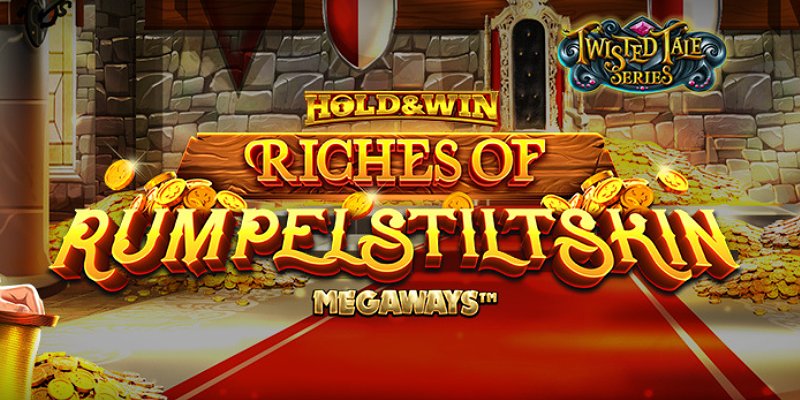 Riches of Rumpelstiltskin Megaways is a new casino slot from iSoftBet following Rumpelstiltskin, a little mythological demon called imp. The character isn’t anything iSoftBet’s developers have created in the labs, though. He was described in the book Children’s and Household Tales by the Brothers Grimm over 200 years ago. This game is part of the Twisted Tales series, where titles of more famous adventure stories, such as Tales of Silver Megaways and Sheriff of Nottingham 2, have already been released.

Rumpelstiltskin saves a miller’s daughter by helping her spin straws to gold. His intentions are nothing but bad, though, and the woman has to figure out the imp’s name within three days, or he will take her firstborn son. Your job is to go deep into the forest and put an end to Rumpelstiltskin’s evil plans. To your help, you’ll find cascading wins, Max Megaways, and Rumpel’s Respins.

Riches of Rumpelstiltskin is a German fairytale that takes place somewhere in the German countryside. It’s fall with orange leaves on the trees and hills in the background. To the right of the reels is a small house, which we suppose belongs to the game’s antiheroic main character. A traditional soundtrack of flutes and guitars is playing, and the grid has a wooden frame with some gold on it.

Like in many other Megaways slots, you’ll find 6 regular reels and an extra horizontal reel above reels 2, 3, 4, and 5. The number of rows changes on every spin, giving the player up to 117649 ways to win when all reels have 7 rows. To make a win, you need to land at least 3 symbols of the same kind on adjacent reels, starting with the first reel to the left. The game is available on all sorts of devices, such as desktops, notepads, and mobile phones.

The lower-paying symbols are 9, 10, J, Q, K, and A. They will give you between 0.5X and 1.5X the bet for a complete winline. The higher-paying symbols are a golden key, a spinning wheel, the miller’s daughter, and Rumpelstiltskin himself. They award from 2X to 12.5X the bet for a 6-of-a-kind win. The Wild Symbol substitutes all mentioned symbols but not the Mystery or Scatter Symbols. There are also 4 Booster Symbols appearing on the horizontal reel in the bonus feature Rumpel’s Respins.

What is the max win in the slot Riches of Rumpelstiltskin Megaways?

What features are available in the slot Riches of Rumpelstiltskin Megaways?

Whenever you make a win, the involved symbols will vanish while new ones fall onto the reels. Symbols on the top tracker will be refilled from left to right. If you’re able to make a new win, the involved symbols will once again disappear and make room for new ones. This goes on as long as you keep making wins, and all cascades belong to the same spin.

The Wild Symbol is a red sign with golden letters saying “wild.” It only appears on the top tracker above reels 2-5, and it substitutes all symbols except the Scatter and Mystery.

Max Megaways can be triggered on any spin, forcing the reels to produce the maximum number of rows, giving the player 117649 ways to win.

There are 4 Booster Symbols that only appear on the extra tracker in the Rumpel’s Respins. Collecting 3 of the same Booster Symbol triggers its specific power-up ability.

Life Boost = Gives the player an extra spin when all regular spins are played. You can store up to 3 extra lives, and they can be won up to 3 times.

Reels Boost = One or two reels of Megaways are boosted to open more space. Reels can be boosted up to 8 symbols high, and you can activate the Reel Boost up to 3 times.

Multiplier Boost = Adding +1 to all Scatter Symbols when the feature is over. You can win the boost 3 times, giving you a multiplier of 4X.

Prize Boost = Boosts all prizes by doubling their amounts. The Prize Boost can be won 3 times.

The Rumpel’s Respins start as soon as 5 or more Scatters land on the same spin. All Scatters are held in their positions while the rest of the grid is cleared. The player gets 3 spins with the possibility to land blanks or Scatters on the regular reels. The spins are reset to 3 every time a Scatter lands. Only blanks and Booster Symbols can land on the 4 positions in the top tracker. Landing 3 Booster Symbols of the same kind will trigger its ability. You can activate each booster up to 3 times.

iSoftBet keeps on making games based on classic literature and fairy tales. We have already met Robin Hood, the three musketeers, Dracula, and Long John Silver, among many others. The main character in this game, the imp Rumpelstiltskin, is probably less well-known than the other characters. However, he’s a great character for a casino slot, and we like that iSoftBet chooses to make the bad guy the main character, just like in the Robin Hood story Sheriff of Nottingham 2.

The games in the Twisted Tales series have different setups and features, making them all unique. The Megaways mechanic works great in Riches of Rumpelstiltskin Megaways, giving the player a smooth gambling experience. Some Megaways games have win multipliers and other modifiers, but this fairytale is more basic. It makes the symbols more valuable than in other games where you have to rely on cascades and growing multipliers to land the really big wins.

Speaking of big wins, the max win is capped at 5000X the bet. It would be a little low for a highly volatile game but is perfectly fine for this story which is labeled as mid/high. The RTP of 96.01% is alright, although nothing to brag about.

Riches of Rumpelstiltskin Megaways from iSoftBet takes the player to the fairytale world of the Brothers Grimm, where you have to save a woman’s baby from the little devil Rumpelstiltskin.