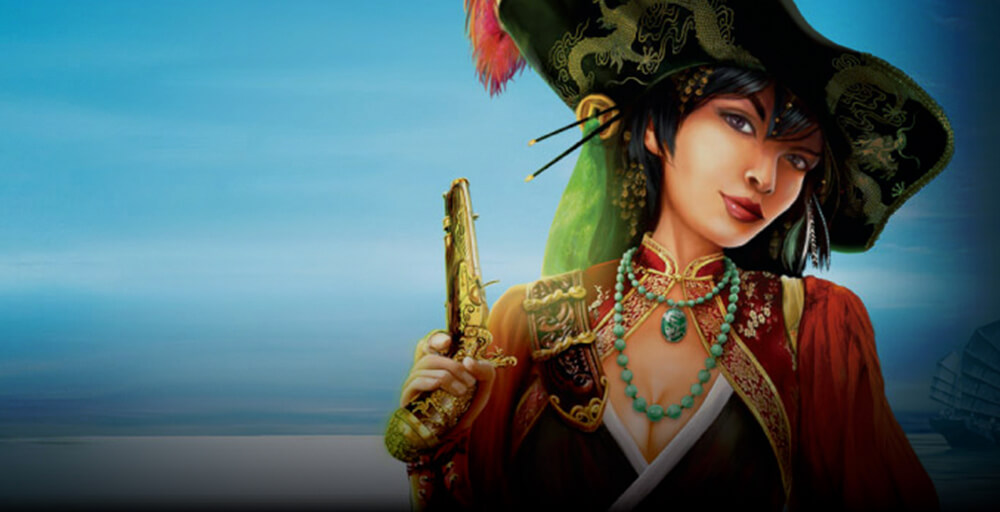 This entertaining slot from WMS Gaming is a pirate-themed one and truthfully this theme doesn’t come around often enough. Red Flag Fleet comes with an unusual reel structure that adds a little more intrigue to this already exciting game.

There are six reels with a total number of 192 paylines. From the left side of the screen across to the right hand side the reels contain 2, 3, 4, 5, 6 and 7 symbol spaces. The reels are basically shaped like a pyramid tilted on its side. All of this is set on a large expansive open sea with what looks like a Chinese Junk sitting on the waves to the left. The symbols are also very pirate-like, and are simply five different pirate characters. In addition to this there are some lower value symbols that are, somewhat unusually for WMS, the playing card values J, Q, K and A. The logo of the game is the wild icon, and a bonus scatter icon is the Chinese style pirate ship.

How to Play Red Flag Fleet

Sailing the high seas is many a child’s dream, and here players get to relive it in their quest for gold. There are some details to bear in mind, though, before drifting off on the ocean. There is a minimum and maximum of just one coin per line. There is, however, a 0.40 minimum and 60 maximum in coin size which means that the bet level is just a little higher than normal. A jackpot sits at ten times the stake, which is an encouraging sign. A high
of 96.04% gives players incentive to keep spinning those reels in the hopes of a big win.

Red Flag Fleet offers only one bonus feature in this game, but luckily it is the free spins feature. Landing a minimum of three of the pirate ship scatter icons will start this game up and running. Players should note that they need to be on reels from two to six only for this part of the game. Three ship scatters offers up five spins; four gives twelve spins and ten times the total bet amount. Lastly five ship scatters wins the player forty spins plus fifty times the total bet.

Not bad going, at all. As the spins occur, the reels also flip. This means that reel seven gets flipped with reel one, and vice versa. An extra bonus during this phase is that there will be two reels that become wild on each of the spins. Landing three more scatters on the first five reels will also win the player more spins, but only while the free spin bonus is active.

The odd reel structure seems to be a specialty for WMS Gaming, and seems to be loved or hated depending on player preferences. Something different, though, it does make for an entertaining little game, and along with the pirate-themed soundtrack and fun graphics, there is the potential to win some serious loot.