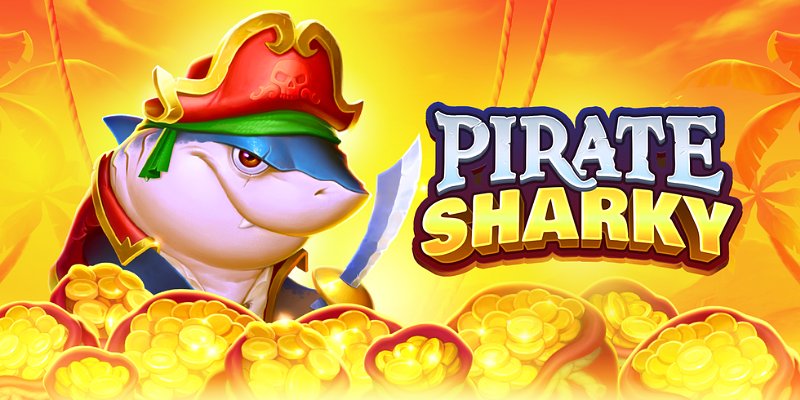 Pirate Sharky is a new casino slot from Playson with pirate sea animals. The main character seems to be a great white shark, an animal reaching up to 6 meters long. However, the sea creatures in this story aren’t made realistically. They have more of a cartoon vibe, with the pirate shark captain wearing a captain’s hat. The main goal is to trigger the free spins, which are packed with extras such as cash-collecting wild symbols and a Money Bag Multiplier that can reach up to 100X the bet.

Pirate Sharky is a video slot from Playson with 5 reels, 4 rows, and 12 paylines. The Min.bet is 0.2, and the Max.bet is 100. The game has an RTP of 96.10% and very high volatility, which means that you can win and lose money fast. Playing the perfect game can result in the max win 20000X the bet.

Pirates may travel rough seas, but Pirate Shark takes place in the most tranquil of places. We’re looking at calm blue water with volcano-looking mountains in the back and a blue sky. On the sides of the water is some land with green palm trees. The brown reels are in the middle of the screen with the game’s logo and two cannons on top. The symbols look like they’re taken straight from a cartoon, with a crab reminiscent of the Caribbean crab Sebastian in the Disney movie The Little Mermaid.

To make a win, you need to land at least 3 of the same symbols on a payline, going left to right. All wins must start on the first reel to the left, and you can play the game on mobile phones and all other devices.

The lower-paying symbols at sea are 10, J, Q, K, and A, made out of rope. They all pay the same, giving the player 10X the bet for a 5-of-a-kind win. The higher-paying symbols are blowfish, octopus, seahorse, and crab. These guys will give you between 50X and 200X the bet. The main character, the pirate shark, appears on two symbols: Wild and Scatter. You will also find Money Bags with a cash value that can be collected in the free spins.

What is the max win in the slot Pirate Sharky?

What features are available in the slot Pirate Sharky?

The Wild Symbol is the pirate shark holding a sword. It only appears in the free spins, where it substitutes all symbols and also collects the cash value of all visible Money Bags.

The Scatter Symbol is the pirate shark with two chains in front of him. It appears on all reels in the base game, and landing 3, 4, or 5 symbols triggers 10, 15, or 20 free spins.

The Free Spins kick in whenever you land 3 or more scatters. The shark Scatter symbol is long gone, and all sharks showing up here are Wilds. Apart from substituting all symbols in making combinations, the shark also collects all cash values from Money Bags on the screen.

The feature is over when the player runs out of spins or when the max win of 20000X the bet is reached.

The free spins are up for grabs for anyone willing to pay for them. Paying 100X the bet will award you a spin that guarantees 10, 15, or 20 spins.

Pirate Sharky has a pretty cool setup of pirates, from the torch-holding blowfish and purple octopus to the bomb-holding seahorse and pipe-smoking crab. One thing is for sure, Playson has gone all-in to make this a fantastic fantasy story far from real life. The main character, a shark with a captain’s hat, could also have been taken straight from a cartoon. Players looking for something more realistic might want to check out Pirates 2: Mutiny or Pirate Golden Age.

The symbols are well-made, but the graphics, in general, aren’t amazing. The palm trees to the sides of the reels are moving slowly in the wind, and a seagull on top of the Bonus Buy button makes some moves. It is, however, a little too static, and we could have wished for more animations.

The reels spin smoothly, and it’s easy to follow the 12 paylines and what’s going on. The base game can become pretty monotonous after a while, but that feeling changes entirely once the free spins are activated. You will find several great features within the feature, like the wild symbol collecting cash values from Money Bags and the treasure hunt, which awards extra spins and a Money Bag multiplier up to 100X the bet. The max win of 20000X the bet is also great, making the player dream of hitting the perfect spin. The game’s RTP of 96.10% is about average in the slot industry.

Pirate Sharky from Playson has a wild shark collecting cash values and awarding extra spins and multipliers in the free spins.