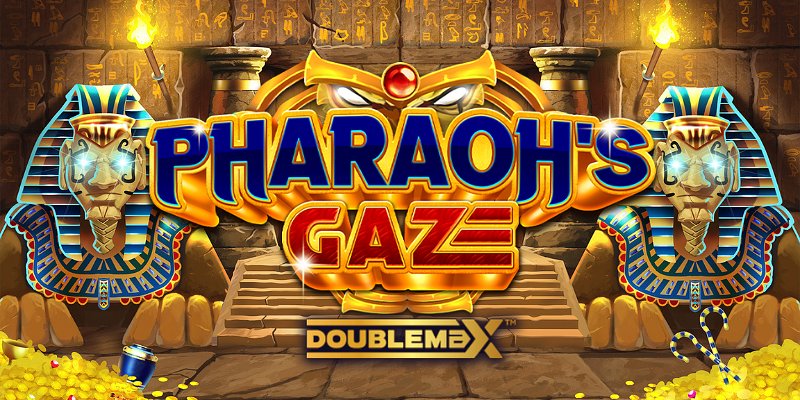 Pharaoh's Gaze DoubleMax is a new casino slot from Bang Bang Games in the spooky surroundings of a Pharaoh's tomb. Entering the catacombs can give you gems that spark the Pharaoh's Gaze, producing wild symbols on 3 consecutive spins. The game also has the DoubleMax mechanic with a win multiplier that doubles on every consecutive win. Anyone brave enough to enter the underground where the Pharaoh rests is fighting for the max win of 15000X the bet.

A catacomb is an underground tunnel or similar construction built to be the resting place for dead people. The Egyptians are known for burying pharaohs and other prominent people in catacombs, but there are also different underground burial grounds in other parts of the world. Rome has at least 40 ancient catacombs, and about six million people are buried in the Catacombs of Paris. The one in Pharaoh's Gaze doesn't only have the tomb of the Pharaoh; it also has a lot of glimmering treasures.

Burning torches light up the stone walls, and above each reel is a Pharaoh head with 3 gems beneath. Landing a total of 3 gems while spinning the reels will trigger the Pharaoh's Gaze, creating Wild Symbols during the following 3 spins. To make a win, you need to land at least 3 of the same symbols on any of the paylines. All wins must start on the first reel to the left, and the game is available on all devices, such as mobile phones and notepads.

The lower-paying symbols in this ancient sanctuary are J, Q, K, and Q. They award the same, giving you 1X the bet for a win containing 5 symbols. The higher-paying symbols are 3 Egyptian gods with the heads of dog, snake and bird, and a golden throne. These symbols pay between 2X and 5X the bet for a 5-of-a-kind win. The Wild Symbol substitutes all symbols except the Scatter and Gem Symbol.

What is the max win in the slot Pharaoh's Gaze DoubleMax?

What features are available in the slot Pharaoh's Gaze DoubleMax?

Whenever you make a win, the involved symbols will disappear and make room for new ones – dropping down from above. If you're able to make a new win, the winning symbols are once again removed while new ones fall on the reels. This goes on as long as you make new wins, and all cascades belong to the same spin.

The DoubleMax Win Multiplier is created by Yggdrasil and has become a favourite among players who appreciate high volatility. The game has a win multiplier starting at 1X and doubling for every cascading win. The multiplier is reset to 1X when a winning cascade is over in the base game. It never resets in the free spins, giving you awesome opportunities to score big.

Paying 25% of your stake will give you a boost that doubles your chances of triggering the free spins.

The Wild Symbol is the Pharaoh's head. It substitutes all symbols except the Scatter and the Gem.

Small diamond-looking gems can land on top of other symbols. They aren't used to making regular wins, but they're collected in a gem meter above the reel they land on. The Pharaoh's Gaze triggers whenever you have collected 3 gems on the same reel.

The Pharaoh's Gaze triggers whenever you collect 3 gems on one of the meters above the reels. Whenever it's activated, the Pharaoh will create 1-3 Wilds on the reel for the coming 3 spins or cascades.

Any collected gems from the base game are carried over to the Free Spins, and up to 6 extra gems are randomly awarded. A meter can never have more than 3 gems. The feature starts with 7 spins that can't be retriggered. The DoubleMax multiplier works like in the base game, except that it never resets between spins. This gives you a great opportunity to land phat winnings at the end of the feature.

You can purchase 7 free spins for 100X the bet. Collected gems from the base game will not be carried over, but you will be rewarded 6 random gems at the start of the feature.

Players with love for ancient Egypt will be happy to see this new release, and the rest of the slot world might ask how many games it's possible to create on the theme. This is one of the better Egyptian adventures, though. We find well-made symbols, an exciting story, and several captivating features. If you're interested in an Egyptian game with a twist, check out the cute cat version Immortails of Egypt. A more classic game on the theme is Mysterious Egypt.

Because Pharaoh's Gaze is a DoubleMax game, the player can make cascading wins. Usually, games with cascading wins have many paylines or pay all ways, but sometimes you'll find it in a 20-paylines game like this too. DoubleMax is a win multiplier that doubles every time the player makes a cascading win, and it can grow really big in just a few wins. The multiplier doesn't reset between free spins, opening up for even greater wins.

Paying 25% extra of the base bet doubles your chances of triggering the free spins, a pretty good option for many players. You should also look out for the small gems that trigger the Pharaoh's Gaze, a feature that guarantees 1-3 Wilds for the following 3 spins. The RTP of 96.1% is about average for casino slots, and the max win of 15000X the bet is another reason to spin the Pharaoh's reels.

Pharaoh's Gaze DoubleMax from Bang Bang Games has a win multiplier doubling its value on every consecutive win.