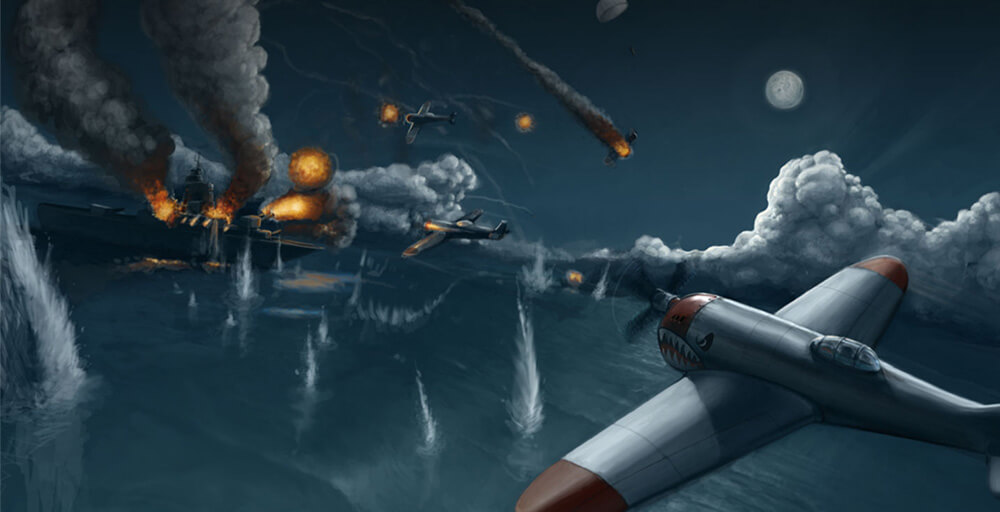 The Pacific Attack is a slot game
released over ten years ago, and despite the age, it still has its merits. The slot is inspired by real events
that happened in the modern history, more specifically the World War II and the
battles that occurred in the Pacific Ocean. As the history tells us, we have
Japanese and Allied forces as the key protagonists in this story.

According to what we know, they used
all sort of weapons, such as biological, chemical, airstrikes, suicide pilots
(kamikaze), or submarine torpedo kamikaze
(Kaiten), and in the end – the atomic bomb. We will find some of these elements
in the Pacific Attack slot created with 5 reels and 15 paylines by
. For some, this slot will not cut it, being an
old game and all that. But the fact is, this old vibe makes this game more
authentic. So, if you are a fan of battle-themed slots, you should definitely give
this one a go.

AIRSTRIKE
ABOUT TO START

Do you want to sink some boats? Then
start playing Pacific Attack slot. You will get the weaponry you need, and if you succeed,
certain awards will be presented. You will encounter generals, pilots, and others along the ride.

There will be airstrikes, pilots jumping with parachutes, and many more battles
to come. The strategies from both sides are being weighted to try gain an advantage. Even though we know the historical outcome,
you can create the story on your own terms in this game.

While playing, you'll hear a specific
audio. Every time the reels start
turning, they make the sound like some kind of aircraft is flying, and when
they form into paylines, the sound
reminds of an airstrike. If you make a pause before spinning the reels, you
will hear indistinct radio communication in the distance.

There are some other facts worth
mentioning when it comes to this slot. The reels are made to look like control
board inside an aircraft with sky appearing in the background. Basically, you
are in the center of an attack and you just destroyed some warplane with smoke still fresh in the air.

Some great symbols appear in the
Pacific Attack casino slot. The Pilot is a Wild symbol, and a Scatter symbol is
the Lady, sending kisses when two or more land on reels.

Together, graphics, animations,
and sound form an authentic picture of battles in the Pacific Ocean during the World War II.

THREE PLANES
TO SINK SOME BOATS

The slot offers some interesting
features. The Wild symbol can act as any other symbol to help form the paylines, except the Scatter and a Bonus
symbol.

Three or more Scatter symbols will
unlock free spins. Scatter symbols wins are also multiplied by total bet value.
If three or more Bonus symbols land on paylines,
the Bonus game will be activated. If that happens, you will have an opportunity
to earn more sinking a few ships with a
weapon of your choosing.

WILL YOU
BECOME A PILOT OR NOT?

Start playing your own battles with
the Pacific Attack slot if battles are something you like. It will bring
history and very authentic experience. With colors and sounds reminding of the
Second World War period, you'll find it very entertaining.

Unlocking the features, you'll get
transported to the center of the Pacific Ocean and in the heart of the battle. You will
have weapons and means to destroy your enemy, with great animations inside the
Bonus Game during the airstrike.

If you like this theme, become a
pilot and lead your own formation in the Pacific Attack
. It will be worth
it.