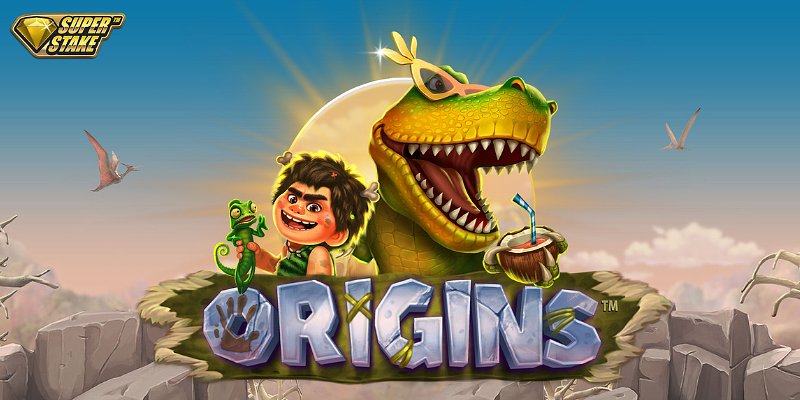 Origins is a new casino slot from Stakelogic taking the player back to a time long before cars, industries, and modern technology. This game has prehistoric people with knives, axes, and other tools they use to survive the day. The base game hosts the Super Hold Feature, where you get to chase mammoths on the plains. The free spins welcome you with retriggers and a specially chosen symbol that can bring extra prizes.

Origins has the look of a modern animated movie from Pixar or Dreamworks. The four main characters, two adults and two children, are clear and detailed. The reels are placed inside a stone frame, and to the sides is a blue sky with clouds. There's also a dinosaur-looking creature flying to the right of the reels. The game's Scatter Symbol is another dinosaur, a tyrannosaurus rex, which makes it quite apparent that Stakelogic hasn't bothered to put the game in the correct time frame considering the dinosaurs became extinct about 65 million years ago, and humans have only been around on the planet for a couple of million years, counting the earliest known human Homo habilis.

Origins has captivating music with hand drums, making it sound like people around a campfire are playing it. To make a win, you need to land at least 3 of the same symbols on adjacent reels, starting with the first reel to the left. You have 243 ways to land a win in this game, which is accessible on mobile phones, notepads, and desktop computers.

The lower-paying symbols in prehistoric times are knife, spike club, spear, axe, and animal cranium. These symbols award between 1X and 2.5X the bet for a 5-of-a-kind win. The higher-paying symbols are a boy holding a lizard, a girl with a snake on her head, a man wearing a blue animal, and an older person wearing what looks to be native American clothes. The four characters will give you between 5X and 50X the bet for a complete winline. The Wild Symbol substitutes all symbols except the Scatter, Super Hold, and Collector.

What is the max win in the slot Origins?

What features are available in the slot Origins?

The Wild Symbol is depicted by a W. It appears anywhere except on the first reel to the left, and it substitutes all regular symbols in making wins, but not the Scatter, Super Hold, or Collector Symbols.

The Scatter Symbol is a tyrannosaurus rex wearing sunglasses. It appears on all reels, and landing 3, 4, or 5 symbols anywhere triggers 10, 15, or 20 free spins.

The symbols on the first reel are locked into place while the other reels spin. The player gets 3 respins with the only possibility of landing mammoths or blanks. Each time a mammoth lands, the number of respins increases by the number of symbols. The Super Hold Symbol can also split into 2 or 3 symbols to increase the ways to win. After all spins are done, the symbols' value is calculated and paid to the player.

The Collector Symbol only appears on reels 1 and 5 in the free spins, collecting cash values from a special symbol during the feature. Landing a total of 4 Collector Symbols also grants extra spins.

The Free Spins starts with one of the 9 regular paying symbols being chosen as a special symbol during the feature. Every time the chosen symbol lands, it will have a cash value. If a Collector Symbol lands on the same spin as a chosen symbol, it will collect the symbol's value and pay it to the player.

The free spins are over when the player runs out of spins or when the max win of 20000X the bet has been reached.

Stakelogic has the ability to make surprisingly basic casino slots like Up4Timer and all its similar-looking games. But the studio also creates visually advanced games like El Patron and Lost Riches of El Dorado. Origins place itself among the latter ones with good-looking detailed characters. They all have their own personal traits, making the whole game more likable.

Super square people might be a little bummed out that dinosaurs and humans are put together, but most players will probably just think this is a cool game. The Super Hold feature with the mammoths landing in the base game brings something extra to the spins. Talking about super, we also have the Super Stake that doubles the chances of triggering the features by doubling the bet. At first sight, it may seem quite expensive, but it doesn't change the RTP, so it's not a bad deal playing with it in that sense.

The special symbol holding a cash value in the free spins is a great idea. Unfortunately, the Collect Symbol didn't show up many times during our free spins, though, so we couldn't take much advantage of it. Collecting Collect Symbols in the feature can also be very profitable, resulting in up to 24 extra spins and a 5X multiplier for the lucky player. We also appreciate the max win of 20000X the bet, although we doubt that it's reachable in the base game even if the game developer claims so.

Origins from Stakelogic has prehistoric people running around with mammoths and dinosaurs, trying to reach the max win of 20000X the bet.