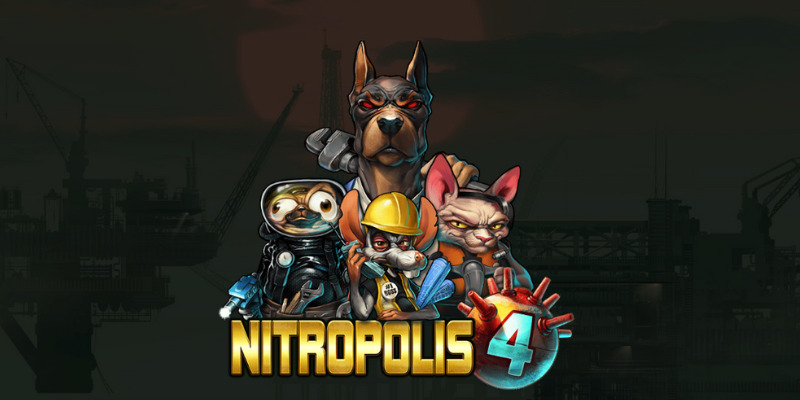 Nitropolis 4 is a new casino slot from ELK Studios where we once again meet the nitro gangs in an action-packed gaming adventure. It was back in 2020 that we first met them in the slot Nitropolis, where the precious green nitro was the focus of the gangs the Dirty Dawgs, the Pug Thugs, the Rouge Rats, and the Gritty Kitties. As time went on, this special gas became more and more inadequate and the tension between the gangs became more and more unstable. Sergeant Nitro Wolf thus entered the stage within Nitropolis 2, hoping to stabilize this incredible state of affairs. Sweeping the street free from crime was easier said than done and within the third edition, Nitropolis 3, Mr. Nitro Wolf fled to warmer climes in the hope of finally finding a peace of mind. However, it wasn't long before the various gangs picked up on this glorious idea and visited the same place, with a new battle arising between them.

From first visiting a dystopian metropolis to then being transferred to a tropical beach, the gangs now head out to sea and dives down to find hidden, valuable items. Much like how the gangs have followed us within this series, all versions have also been imbued with an adrenaline-packed state of mind with the Nitro reels being a big contributing factor to this. The ability to boost a reel setup of up to 6X8, or to activate Win Both Ways, Nitro Boosters and Big Symbols are some of the festive elements that make the spins memorable and it’s now time to once again dive into a new edition within the Nitropolis series to find out what to expect during the spins.

Nitropolis 4 is a video slot from ELK Studios that features 6 reels and 4 to 8 rows, where you start with 4096 ways to win. You can choose between making a Min.bet of 0.20 and a Max.bet of 100. The game's RTP has been lowered from previous versions which have been 96.1%, 95% and 95% respectively, where we now have a lower RTP of 94%. Nitropolis 4 has a high volatility and something that has been pushed up though is the potential max win which now stands at 50,000X the bet.

Within this action-packed gaming adventure, we have a couple of great features to help us in our quest for the bigger wins. The features are Wild Symbol, Avalanche, Big Symbols, Nitro Reels, Nitro Multiplier, Nitro Booster, Bonus Game and X-iter.

The game's design is a futuristic world, where we follow the nitro gangs out at sea in search of valuable treasures under the surface. In the background of the reels, you can see large buildings, reminiscent of oil rigs found out at sea, where upon activation of the bonus game you dive down to a place under the surface. You can play this slot on all the devices mobiles, notepads and desktops. You create a winning combination by landing 3 or more of the same symbol type on adjacent reels starting at the far left, which then activates the Avalanche feature.

What is the max win in the slot Nitropolis 4?

What features are available in the slot Nitropolis 4?

The game's wild symbol helps enable more winning combinations by substituting for all symbols, except for the scatter symbols.

When you create a win, the avalanche feature is activated, whereby winning symbols disappear from the reels and new ones fall down to cover the empty positions. An extra row is added at each avalanche, where you can get up to 8 rows per reel, thus increasing the number of ways to win. Nitro Multipliers and Nitro Reels that are part of a win will respin. This avalanche continues as long as new wins are created, with the total win being paid out when no more wins are created.

During your spins, big symbols can randomly land, where these can be of sizes 2X2 or 3X3. A big symbol that is 3X3, corresponds to 9 symbols of the symbol type that it shows. These big symbols can contain low, medium, high paying and wild symbols.

This symbol covers two symbol positions and will multiply all wins in view, where it counts as a 1X1 symbol type. It can land with values of either 4X, 6X, 8X, 10X or 12X and it is multiplicative if you have landed multiple Nitro Multiplier at the same time.

There are 8 different Nitro Boosters to land, where these add features to the main reels. These are and do the following:

Redrop = All scatter symbols and Nitro Reels are kept, while the other symbols are removed and then you get to take part in a redrop where new symbols land to cover the empty positions.

Both Ways = Wins are created from left to right, and from right to left.

Garbage Collect = Symbols will be randomly selected, where they are then removed and activate the avalanche feature.

Max Rows = This will expand the reels so that the maximum of 8 rows is active.

Nitro Appear = A Nitro Reel of random size will be placed on the reels, where it will replace the symbols in the position it lands on.

Nitro Wild = An already existing Nitro Reel will be filled with wild symbols. If you do not have a Nitro Reel at the moment, this feature will be kept pending until you land one or the bonus game ends.

Nitro Upgrade = The Nitro Reels on the same and adjacent reels will upgrade and additional symbols or multipliers will be added to the Nitro Reels. If you do not have a Nitro Reel at the moment, this feature will be kept pending until you land one or the bonus game ends.

If you want to take advantage of any of the features immediately, you can use the X-iter mode. You can choose between the following options:

2X (Bonus Hunt) = You get to take part in a spin that has more than twice the chance of activating the bonus game.

10X (Nitro Booster) = You get to enjoy a spin where the Nitro Booster provides 2 features when activated.

25X (Super Spin) = You get to enjoy a spin where the Max Rows and Both Ways are activated.

500X (Super Bonus Game) = You activate the super bonus game, where the Both Ways and Max Rows are activated.

As exciting as it is to follow these gangs within the nitro filled world, it is also very entertaining to take part in the developments within this Nitropolis series. The first edition of this series really left a gigantic imprint in the slot’s world, where an exceptional gaming experience awaited the visitors. Its nitro reels demonstrated an elegant interplay with other features such as Avalanche, increasing rows and nitro boosters, where a spin many times becomes long-lasting with a tendency to become extremely profitable as well. During all of the releases that have taken place within this series, mostly small but essential upgrades have taken place, where within the third release we could see a massive increase in its potential maximum win from 10000X to then being 50000X the bet. This large potential max win also comes with within this version and the question one quickly asks is "What's new within Nitropolis 4?".

For starters, we have been transported to a new location, similar to an oil rig, where the gangs now are searching for riches down at the bottom of the ocean. Although it's the same gang that we'll meet in the different versions, ELK Studios shows again and again its skill in terms of design and innovation, where novelty is the focus. Generic doesn't seem to be in their vocabulary and entertaining it is, as you are constantly treated to new experiences. Much is the same here, but at the same time not, as a Nitro Multiplier is introduced that can land with values of up to 12X, where it also can be combined with other Nitro Multipliers that may land at the same time. This gives a huge boost in the creation of big wins and becomes a perfect push in the right direction towards perfection. Garbage Collect is another feature that one can take advantage of, where it creates extra chances to generate new wins.

ELK Studios builds on a series that has made a huge mark on the slot world and their strive for perfection is evident as they constantly work their way closer to this. Amidst all this euphoria, one can't help but mention the lower RTP that the game has been created with. While there is one and only one RTP used, which certainly can be reassuring as a player, it could have been cranked up a tad for sure. The small upgrades that have been made within this version give the game a great touch and it's a great addition to what was already available.

Nitropolis 4 is a slot where the Nitro Multipliers give other familiar features a perfect complement, where you once again have a chance to scoop up gigantic wins.