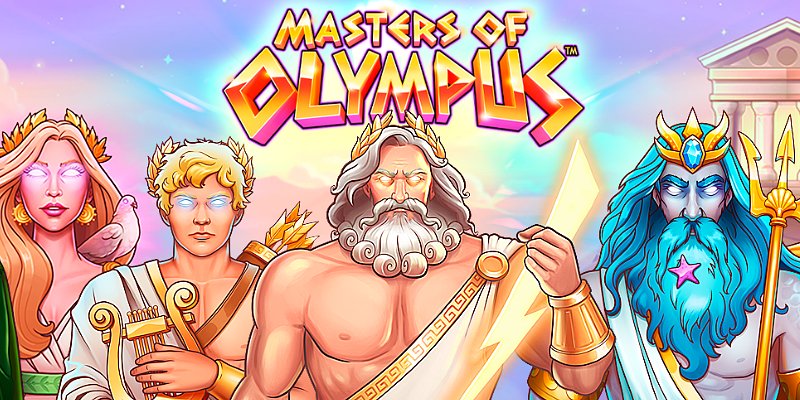 Masters of Olympus is a new casino slot from Snowborn summoning a bunch of the Greek gods for a divine gaming experience. The game has a lot in common with Masters of Valhalla, where the main characters are the Norse gods. The mighty Zeus overlooks the reels, throwing lightning bolts of wild symbols that trigger respins. Triggering the Olympus or Spartan bonus will result in several gods coming out to help you. Poseidon expands the reels, and Aphrodite brings a multiplier that is used on all following spins. Let’s visit the gods at Mount Olympus.

There’s quite a lot going on when you hang around with the gods at Mount Olympus. Players will come across the features Wild Symbol, Scatter Symbol, Zeus Respins, Shield Symbol, Godly Bonus Symbols, Spartan Booster, Olympus Bonus, Spartan Bonus, and Bonus Buy.

According to Greek mythology, there are 12 gods living on Mount Olympus, and seven of them participate in this game. The sky and thunder god Zeus is standing with burning eyes next to the reels, holding a lightning bolt in his hand. Behind him is a portal, and on the other side of the reels are clouds and mountains. The reels stand between two marble pillars, and all buttons to play are located at the bottom of the screen. To make a win, you need to land at least 3 of the same symbols on adjacent reels, starting with the first reel to the left. The game is available on mobile phones and other devices.

The lower-paying symbols on Mount Olympus are the playing card suits diamonds, clubs, spades, and hearts. They award between 1.1X and 1.2X the bet for a win containing 5 symbols. The higher-paying symbols are the gods Aphrodite, Apollo, Ares, and Athena. These four divine creatures pay between 2X and 3X the bet for a 5-of-a-kind win. The Wild Symbol substitutes all symbols except the Scatter Symbol, which is used to trigger the Olympus and Spartan Bonus Feature. You’ll also find Shield Symbols and Godly Bonus Symbols in the Bonus features.

What is the max win in the slot Masters of Olympus?

What features are available in the slot Masters of Olympus?

The Wild Symbol is a lightning bolt, substituting all other symbols except the Scatter.

The Scatter Symbol appears on reels 1, 3, and 5. Landing 3 symbols on a spin triggers the Olympus or Spartan Bonus.

Every time you land a Wild, there’s a chance that Zeus triggers the Zeus Respins. All Wilds expand from their positions down to all positions on their respective reels. On every respin, the expanding Wilds move one position downwards. If more Wilds land during the feature, they will also expand. Landing a total of 3 Scatter Symbols during the respins will trigger the bonus feature. The Respins continue until no Wilds are visible.

Every time you land Scatter Symbols on reels 1 and 3, you collect them on the Spartan Booster meter in the upper right-hand corner. When the meter is full, it will upgrade the Olympus Bonus to the Spartan Bonus the next time you trigger the bonus feature. The Booster is reset after it’s used, and the collected symbols are stored per bet.

The Olympus Bonus is a respins feature that starts with 3 spins. The layout is the same as in the base game but with two extra rows below the regular grid that Poseidon can unlock. Three Shield Symbols are randomly placed and locked to their positions before the first spin. During the spins, you can land blanks, Shields, or Godly Symbols on each position. Whenever a Shield or God lands, the spins are reset to 3. Except for having a value between 10X and 50X, the gods also have their special abilities.

Poseidon = Triggers a reel expansion one row down on a locked row. The symbol can land twice during the feature, expanding one row each time. All symbols that have landed on a locked row before Poseidon appears become active when Poseidon opens the row.

Aphrodite = Lands with a multiplier value which is used to multiply all symbols landing on that and any following spin. Aphrodite doesn’t multiply symbols that landed before she appears.

Ares = Collects the value of all symbols on the spin it lands.

Athena = Collects the value of all symbols on the reels when she lands and any following spin.

Zeus = Adds his value to all other symbols on the reels on that spin and any following spin.

Apollo = Adds his value to all other symbols on the reels when he lands.

Hades = Reactivates all Apollo and Ares Symbols that have landed before.

The Olympus Bonus is over when the player runs out of spins or all positions are filled with symbols.

Masters of Olympus is yet another divine game from Snowborn. It has a lot in common with the Norse god adventure Masters of Valhalla, but it’s not just a copy where the gods have been exchanged. Let’s start with the similarities. Both games have a 5x4 grid, 1024 ways to win, and super exciting bonus features containing 3 or 4 respins. To your help in the bonus features are not only the 4 gods who are the best-paying regular symbols, but also Zeus, Poseidon, and Hades, who can do wonders on the reels. Zeus can also turn up and trigger a cool respin feature whenever you land a wild symbol in the base game.

The regular symbols pay exactly the same in both games, but the godly symbols in the bonus features pay much more in this version. The total max win of 20000X the bet is something to fight for, and it’s the same for both games. Master of Olympus has an RTP of 96.01%, which is about average in the slot industry, and the game has more to offer than most casino slots. If this game is your thing, you’ll most probably also dig Gates of Olympus, where 8 or more symbols make a win, no matter where they land.

Master of Olympus from Snowborn is a game full of divine tricks and bonus features where 7 different gods can help you towards the max win of 20000X the bet.