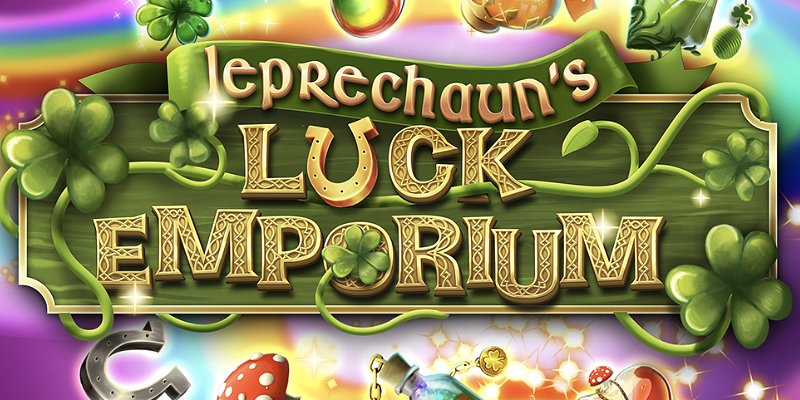 Leprechaun's Luck Emporium is a new casino slot from G. Games featuring one of the casino world's most familiar characters: the Leprechaun. An emporium can mean a lot of things, like a trading post for Classical antiquity, the river port of ancient Rome, or a shopping mall in Thailand. In this game, it's a small shop set up in a house by the Leprechaun that specializes in chemistry, mixing magic potions that can pay big bucks. Symbols make winning combinations wherever they end up, so you don't have to worry about paylines. Every win also produces a tumble, making it possible to land consecutive wins on the same spin.

Leprechaun's Luck Emporium is a video slot from G. Games with 6 reels and 5 rows. You make wins by landing 8 or more of the same symbol anywhere on the reels, so there are no regular paylines. The Min.bet is 0.2, and the Max.bet is 20. The game's RTP is 96.22% and the volatility is high. Spinning the reels in the best possible way can result in the max win of 5000X the bet. The hit frequency of 16.66% means that about one of six spins is a win.

When entering the Leprechaun's emporium, you should check out the features Tumbling Wins, Scatter Symbol, and Free Spins.

When you start the game, you step into the house of the Leprechaun, which also turns out to be some shop. The guy sits at a counter in front of a cash register and a burning candle. Behind him are shelves with potion bottles, and the semi-transparent reels are to the right of him. In the far right corner hangs a potion bottle with mushrooms, and stairs lead to an upper floor. The main instruments in the music are guitars and violins, playing tunes familiar to Irish folk music.

All buttons to play the game are at the bottom of the screen. You make wins by landing 8 or more of the same symbol anywhere on the reels. When a win is made, the involved symbols disappear, making room for new ones. If you can make a new win, the symbols will once again vanish, and the consecutive wins continue until you can't make any more winning combinations. The game is available on mobile phones and other devices.

What is the max win in the slot Leprechaun's Luck Emporium?

What features are available in the slot Leprechaun's Luck Emporium?

The features are Tumbling Wins, Scatter Symbol, and Free Spins.

Tumbling Wins is a feature you'll find in most games where you can make wins by combining symbols no matter where they land. When 8 or more symbols of the same kind are present on the screen, they will make a win. After payout, the symbols disappear, and new ones are added. If you're able to make a new win, the involved symbols will once again disappear while new ones turn up. These tumbles continue as long as a new win can be made, and they all belong to the same spin.

The Scatter Symbol is a golden kettle with pink, yellow, and blue substances. Landing 4 or more symbols triggers 8 free spins. You're also awarded 3X, 5X, or 100X the bet for landing 4, 5, or 6 symbols.

The Free Spins start with 8 spins, no matter if you triggered the feature with 4, 5, or 6 Scatters. It is played on a smaller grid with 5 reels and 4 rows. On every spin, you can land a potion bottle on each empty space. The potion bottles are unique for the free spins feature, and they all have a 1X multiplier when they land. A random part of the grid is highlighted on each spin by a magic cauldron, and only symbols landing within the highlighted area will stick. All potions that stick to the reels will pay a cash prize at the end of the feature, and the other ones disappear on the next spin.

The cauldron produces a random prize on each spin that is applied to all potion bottles in the segment. If the cauldron shows +3X, it will add +3 to every new potion in the zone, giving it a total value of 4X. All potions in a zone that got stuck on a previous spin will also have their values updated by the cauldron.

The cauldron can also award 2 extra spins, which are awarded even if there aren't any potions in the selected zone. The total multipliers of all potions are added together and paid to the player when the feature is over. You play the game until you run out of spins or until the max win of 5000X the bet is reached.

3 Lucky Rainbows, Rainbow Gold, and Murphy's Pots are just a few examples of the enormous amount of casino slots featuring Leprechauns. A rainbow, golden pots, and mushrooms are always almost present, but the chemistry skills shown in Leprechaun's Luck Emporium is a new approach to the genre. The little red-bearded guy behind the counter seems to be running a smaller pharmacy.

This game might, at first sight, seem pretty simple, but it's also modern in the sense that the symbols pay wherever they land. In other words: forget everything about paylines. All you have to do is make sure at least 8 of the same symbol type land on the screen. When the free spins start, you'll hopefully land big potion zones on each spin because it raises your chances of the potions sticking. The sooner a potion bottle lands, the better the case it will be upgraded during the feature.

The game's max win is capped at 5000X the bet, which isn't a great number for a highly volatile slot. The RTP of 96.22% is solid as a perfect batch of Leprechaun potion, and the betting range should appeal to most players.

Leprechaun's Luck Emporium from G. Games has a Leprechaun selling homemade potions in his store.