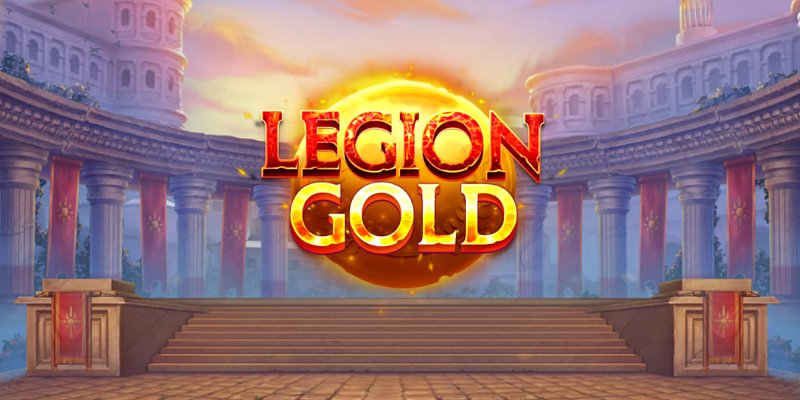 Legion Gold is a new casino slot from Play’n GO where the objective is to bring home some gold from the Roman Legion. The legion was the biggest military unit in the Roman army, with over 5000 infantry and 300 equities a good 2000 years ago. The game takes the player back in time to grand Roman buildings with wild warriors and furious animals. You will find free spins with a moving Mega Symbol and a gold coin respins feature. Get ready to face some tough challenges.

The surroundings of Legion Gold look similar to a Roman fighting arena like the Colosseum. The arenas were often oval amphitheaters where gladiators fought wild animals and other gladiators. This game has huge pillars in a circle, but there’s a stage in the middle that doesn’t seem to be made for battles but rather for prominent people to give speeches. The reels are in the middle, and all buttons to play the game are in the bottom of the screen. You make a win by landing 3 or more symbols of the same type on any of the 25 paylines, starting on the first reel to the left. Legion Gold is available on desktops, notepads, and mobile phones.

The lower-paying symbols are J, Q, K, and A. They award the same amount, giving you 2X the bet for a 5-of-a-kind win. The higher-paying symbols are a vulture, a barking dog, a horse, and a bear. The horse and the bear wear golden headgear resembling helmets, and the dog has a golden necklace. These guys award between 8X and 20X the bet for a win containing 5 symbols. The Wild Symbol substitutes all symbols except the Scatter Symbol and the Gold Coin.

What is the max win in the slot Legion Gold?

What features are available in the slot Legion Gold?

The Wild Symbol is a Roman warrior wearing a golden helmet and a fur coat. It substitutes all regular paying symbols and pays the same amount as the best-paying symbol, the bear, on its own.

The Scatter Symbol is an amulet with a golden lion head. It can appear on reels 1, 3, and 5, and landing 3 Scatters anywhere triggers 5 Mega Free Spins.

The triggering Gold Coins become sticky and stay while the rest of the reels spin. You start with 3 spins that can either bring a gold coin or a blank on each position. The spins reset to 3 every time you land a coin. The feature ends when you run out of spins or when all 15 positions are filled. The value of all coins is added together and paid out. If you fill all positions with coins, you’re awarded a Golden Prize of 1000X the bet.

You start the feature with 5 free spins and a 3x3 Mega Symbol that randomly moves on the reels on every spin. Any symbol can appear as a huge Mega Symbol, which is counted as 9 individual symbols. This means that you’re guaranteed a win if the Mega Symbol stays on the first three reels. The Mega Free Spins finish when the player runs out of spins.

Get ready to go back in time with this grand Roman Empire-themed casino slot. Among vultures and fighting animals hide two sweet bonus games. The Mega Free Spins are sweet with the Mega Symbol that will guarantee 9 symbols of the same kind on every spin. Landing the huge symbol on the first three reels guarantees a win. The only downside is that 5 free spins feel kind of few, considering it’s not easy to trigger the feature.

The other bonus game is the Gold Re-Spins, which work like most respin features. Our experience is that it usually doesn’t award very big amounts, but you will get a sweet 1000X the bet from filling up all positions. Another thing with the feature is that the coins are worthless if you land less than 6 since you can’t make regular wins with them.

Fans of ancient Rome know that there are plenty of games available on the theme. A classic one still played heavily on the internet casinos is Roman Legion, which has a straightforward 5x3 setup with 5 paylines. A newer game with features such as Infectious Wild and Legion X Gemina Spins and a max win of 31000X the bet is Legion X. A much better possible payout than Legion Gold’s 2000X the bet. This is another type of game, though, with medium volatility.

Legion Gold from Play’n GO is a Roman adventure with both respins and free spins with a huge 3x3 symbol.