Legendary Battle of the Nian 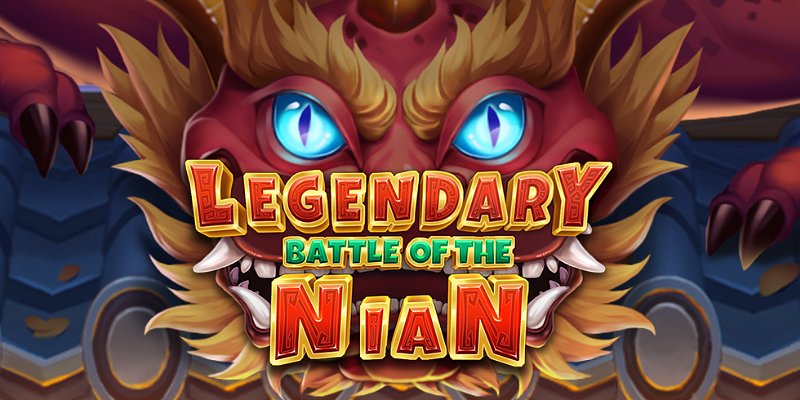 Legendary Battle of the Nian is a new casino slot from Blue Guru Games where players fight the mythological Chinese beast Nian. It’s one of the main characters in the Chinese New Year and is said to live under the sea or in the mountains. However, the earliest written sources of Nian as a creature dates to the early 20th century, so it’s unclear whether the beast is part of ancient folk mythology or a part of a local oral tradition recorded about a hundred years ago.

Winning symbols are removed from the screen while others are added in this battle, giving you chances of landing consecutive wins on the same spin. The main goal is to trigger the free spins where every Scatter Symbol that lands adds a level to the final prize, which is awarded by fireworks when the free spins finish. Upgrading all levels on the grid will give you the max win 5000X the bet.

When you’re fighting giant beasts, you might need to take refuge with the features Wild Symbol, Cascading Symbols, Free Spins, and Bonus Buy.

We’re in a traditional Chinese neighborhood, looking down on the street from above. To the sides are apartment buildings next to each other, and red round lamps hang on a string over the street. The reels are in the middle of the screen, and two statues of dragons sit beneath. To make a win, you need to land at least 3 of the same symbols on adjacent reels, starting with the first reel to the left. The game is available on desktops, notepads, and mobile phones.

The lower-paying symbols are 9, 10, J, Q, K, and A. They will give you between 0.67X and 1X the bet for a 5-of-a-kind win. The higher-paying symbols are gong, bell, drum, and gas light. Landing a win containing 5 of those awards 1.33X to 6.67X the bet. The Wild Symbol substitutes all mentioned symbols but not the Scatter.

What is the max win in the slot Legendary Battle of the Nian?

What features are available in the slot Legendary Battle of the Nian?

The Wild Symbol is the head of the fearsome beast Nian. It can appear anywhere except on the first reel, and it substitutes all symbols except the Scatter.

The symbols in a winning combination will disappear whenever you make a win and make room for new ones. If you’re able to make another win when new symbols are added, the involved symbols will also disappear. These cascading wins continue until you can’t make any more, all belonging to the same spin.

Landing 3 or more Scatter Symbols anywhere on the grid triggers 15 free spins. Each position with a triggering Scatter gets a level 1 upgrade before the feature starts. Every Scatter landing during the feature adds a level to its specific position. The positions can reach level 3, and every position that has reached at least level 1 will pay a cash prize when the feature is over.

Upgrading all 15 positions to level 3 awards the Grand Prize of 5000X the bet. The prizes are awarded by shooting fireworks after all free spins finish.

You can buy yourself a ticket straight to the Free Spins by paying 60X the bet in the Bonus Buy feature.

Legendary Battle of Nian has crystal-sharp graphics and nice details, like the lamps dangling in the wind. The reels spin smoothly and blow up winning symbols before new ones are added in cascading wins. You have 243 ways to win since any combination is okay as long as the symbols are on adjacent reels, starting on the first one.

Cascading wins can give you a pretty good sum by making several winning combinations, but they don’t give you a win multiplier like in games such as LolliPop or Neon Villains DoubleMax, which has a multiplier that doubles on every cascade. Thus, the free spins are what you really want. You get 15 spins where you – apart from making nice wins – want to land as many Scatters as possible. The more Scatters, the bigger the prize at the end of the free spins.

Legendary Battle of Nian from Blue Guru Games gives the player several chances of scoring with cascading wins and a final fireworks show at the end of the free spins, awarding up to 5000X the bet.