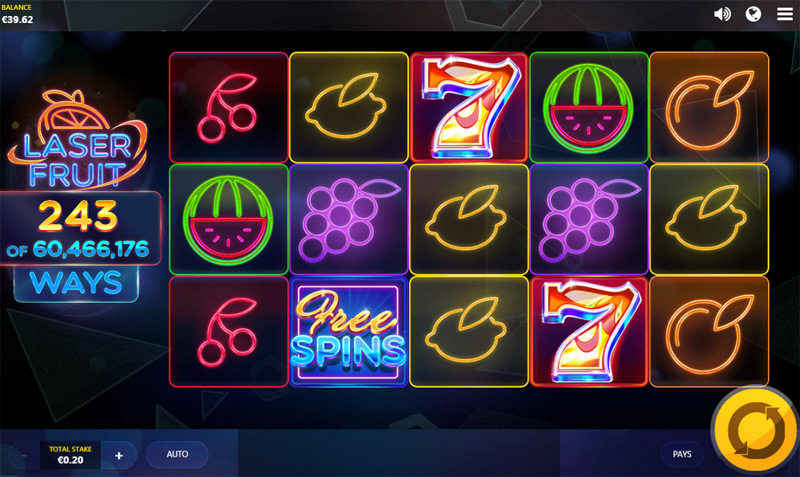 There has never
been a video slot like Laser Fruit on the market, boasting a total of 60,466,176
ways to win. This highly entertaining game is crafted by
,
boasting a classic video slots’ layout with 5 reels and 243 paylines. However,
during the gameplay, you are able to expand the game’s layout and take
advantage more than 60 million ways to win.

Besides boasting
a massive number of potential win ways, the game is also very appealing to look
at, with various kinds of neon symbols that keep dancing on the reels as you
spin the reels. Besides this massive number of possible paylines you get to
enjoy, the Laser Fruit video slot also boats Scatter Symbols, plenty of free spins,
random expansion symbols, and much more.

As you start
playing the game, you will definitely love what Red Tiger Gaming did here,
incorporating plenty of those traditional, old slot machines’ symbols such as
single, double, and triple bar symbol,, lemons, oranges, and bells into the
layout. However, the game is far away from being a classic slot as there is a
modern twist added to the reels with bright, neon colors depicting the game’s
symbols. The game boasts a kind of disco, bright, blue laser vibe to it, which
perfectly match slot’s background sounds featuring a very distinct, laid-back
techno beat.

With plenty of
bright, neon-colored symbols, and those techno beats accompanying you, the game
provides a truly memorable online gaming experience you get to enjoy from the
very first spin of the reels. As already mentioned, besides being loaded with
those catchy details, the Laser Fruit video slot also comes packed with the
free spins mode, Expanding Reels, and plenty of ways to win big.

The regular
layout of the game includes 5 reels and 243 paylines. However, during the
gameplay, you are able to get up to a total of 60,466,176 win-lines. During the
game’s bonus features, those paylines stick and grow as you hit the blue laser feature,
which is required to add extra blocks to the Laser Fruit reel set.

To trigger the
game’s bonus mode, you have to land at least three of the game’s Scatter symbols
anywhere in the view. Once you get there, you are taken to a wheel where you’ll
be assigned a random number of free spins to get you started.

The minimum
number of free spins you can get is 8 while the maximum is 50. It should be
noted that this free spins mode can be re-triggered at any time - up to 10
times. During the bonus feature, those expanding paylines stick and grow, which
can result in awesome wins as the Laser Fruit video slot comes with a
staggering 10,000x potential. This bonus mode starts with 243 paylines and
expands the grid to the right or upwards by one (or more) block each time a
blue laser hits the reels. As those blocks expand, random symbols are added to
the reels in new positions as well.

If you like your
games a bit different, truly engaging, and, of course, highly rewarding, the
disco party offered in the Laser Fruit
is definitely worth your
attention. With its crisp graphics, impressive visuals, and more than 60 million
possible ways to win, Laser Fruit is a virtual destination definitely worth a
visit.