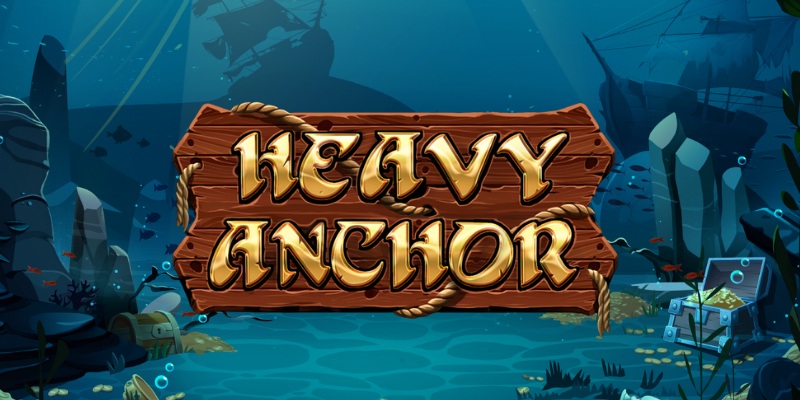 Heavy Anchor is a new casino slot from OctoPlay in which we get to enjoy a pirate adventure where an appealing treasure of 11.000x the bet awaits. Although fairly new to the scene, OctoPlay has solidified itself as a promising and competent provider, much because of beautiful graphics and smooth gameplay. A while back, we took a look at Salmon King, which followed the provider’s pattern of visual excellence, but fell a bit short on its gameplay. At the time of writing this, we haven’t started spinning, but we can already see that this unconventional grid will offer something interesting. Let’s take a look!

Heavy Anchor is a video slot from OctoPlay that features 5 reels and 3-9 rows. Similarly to the prominent Megaways feature, the rows change each spin. Instead of paylines or payways, 8 or more matching symbols anywhere on the grid make a winning combination. Players can choose between a Min.bet of 0.10 and a Max.bet of 90. The game has an RTP of 95.73%, which is slightly below the industry average, but good enough. Heavy Anchor is played at medium volatility and can net you a max win of 11.000x the bet.

Accompanying you on this dangerous adventure are some intriguing mechanics. The features are Scatter Symbol, Wild Compass, Red Blaze, Blue Blaze, Free Spins, and Bonus Buy.

The game takes place in a bay full of treasures. We’re dealing with quite a confusing setting, as it almost looks like we’re underwater, but at the same time, not. Bubbles are ascending, and there appears to be water between us and the two ships in the background. Perhaps the whole bay is flooded, but yeah, it’s hard to understand what we’re looking at. Nonetheless, it’s a gorgeous environment with some great music as icing on the cake.

Heavy Anchor can be played on all common mobile devices and desktops. A winning combination is created by landing 8 or more matching symbols anywhere on the grid. The lower-paying symbols consist of coins in various colors and an eye patch. A winning combination of 10 with one of those pays 0.20x-1.6x the bet. The higher-paying symbols include scrolls, hooks, rum, and rings. Ten-of-a-kind with these pays 2.4x-6x the bet. If a symbol has a red or blue blaze around it, it will be multiplied by 5x or 10x. The Wild symbol comes in the form of a compass, but we will dive into that in the next section. Lastly, landing 3 or more Scatter symbols (chests) triggers the Free Spins feature.

What is the max win in the slot Heavy Anchor?

What features are available in the slot Heavy Anchor?

When a Wild Compass is part of a winning combination, it rises above the reel it landed on and waits until there are no further wins on the reels. It then transforms into a Wild Anchor, which either starts off on a 1x multiplier or with the previous Wild Anchor’s multiplier if there’s been one on the same spin. The anchor then falls down, breaking each symbol on the reel and increasing its multiplier by +1 for each symbol destroyed. Once all anchors have fallen down, the reels are refilled with symbols, and any winning combinations are multiplied by the final multiplier value. Wild symbols substitute for other paying symbols.

Symbols with a Red Blaze have their payout increased by 5x.

Symbols with a Blue Blaze have their payout increased by 10x.

If you want to skip past the base game and jump straight into some Free Spins action, you can do so at a cost of 150x the bet.

Ever since Jack Sparrow started roaming the seas, pirates have become a big deal in pop culture. The essence of the theme fits really well with slot games, considering we are after treasures and riches. However, no actual pirates are present in this game, so it’s up to you to step into that role and create your own fantasy. Honestly, that won’t be too hard, as the scenery in Heavy Anchor is really captivating, and unless you’re having a terrible session, you won’t want to leave.

Apart from a well-crafted environment, the Wild Compass feature is an innovative mechanic. It goes to show that you can mix standard features like wilds and multipliers and still produce a fresh game that doesn’t feel like a lazy copy. We had similar thoughts about Salmon King, where it didn’t necessarily feel like a revolutionary game, but OctoPlay had made sure to put its own touch on it. Heavy Anchor doesn’t revolutionize the scene either, but it’s more innovative and fun than most games getting released, and it can net you some serious wins.