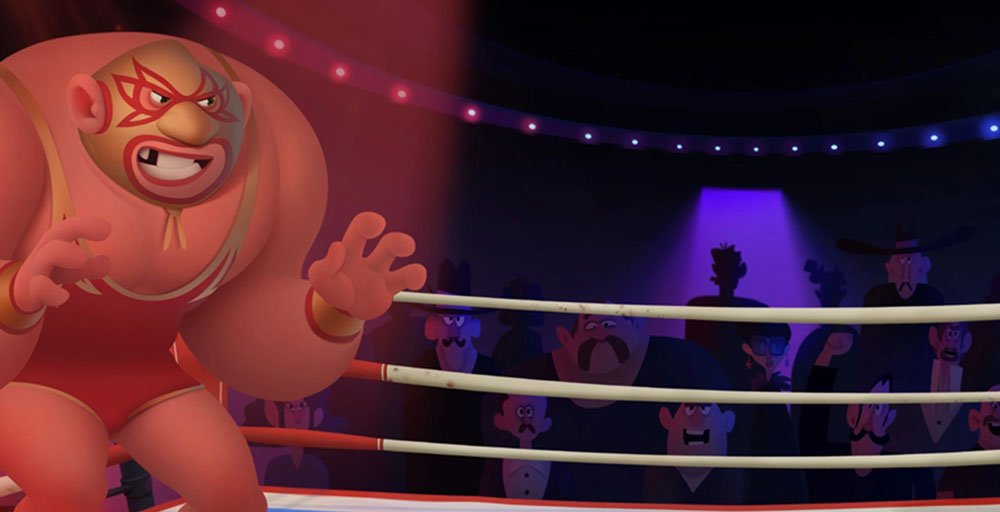 Welcome to Mexico, the land where you can find spicy food, cactus, and the best wrestler in the world. His name is Gustavo, and he's gonna show some impressive moves on 5 reels, and 20 pay lines. So, if you'd like to see him fight, then check out the Gustavo el Luchador video slot, developed by Leander Games. It's going to get hot, and it'll definitely be worth it with the goofy Gustavo taking the lead. His opponents, all of them, devious and cunning, will underestimate him because of his bright smile. But they are not aware of what will happen when this funny looking guy takes a bite of tortilla and some chilli. In short, he'll destroy them.

Fire Spreading Across the Reels

In amazing Mexico, our brave Gustavo will face El Titan, Tarantula, Infierno and Los Tigres. If his beats them all, the championship belt will be his, plus the bragging rights.

With houses in the background, confirming above mentioned location, and a few cacti on the way, our fighter will feel quite confident about the upcoming event. It's a sunny day, so nothing stands in his way. Even though his arms are skinny, there is no doubt muscles are hiding in there.

Among first contestants, Gustavo encounters are Los Tigres, and these two chubby twins with a creepy smile will really try to hurt our hero. Then comes Infierno with a sly expression, he'll make an effort with all dirty tricks he can muster.

If Gustavo succeeds in defeating Los Tigres and Infierno, he'll have a chance to meet the famous Tarantula. This charming lady will use all her wiles to seduce, and then strike when the opponent is the most vulnerable.

In the end, if all goes well, the final match will be with El Titan, and let's face it, this enormous guy won't show mercy. But our fighter still hasn't played all his cards, and with a little bit of chilli, and tequila he'll make fire on the reels.

While Gustavo does his work, we can hear traditional Mexican music, as a support to this extremely brave and self-pronounced wrestler.

There are many symbols, and all in various colors with dominant warm tones. Among special symbols in the base game, there is Gustavo as a Wild, and we'll also see Free Spins, and Bonus Game symbol. As an addition, in Free Spins feature appear the championship belt, a silver cup, and some animated wrestling moves, looking quite spectacular.

Well, Gustavo has a lot of work to do when 3 Free Spins symbols land on the reels 1, 3, and 5. At that moment the Free Spins feature will start, and he'll have to match his opponent's moves in order to continue in the Free Spins Game. During 6 initial rounds, there will be 81 ways to win, left to right and right to left. To keep on fighting, Gustavo needs at least 2 matching wrestler moves. The bad news is, his adversary can get them too, and beat him with it. And if our guy comes out as the winner, another one will appear, giving Gustavo another 6 rounds to fight until he loses.

During the base game, as much needed help comes the Wild, landing only on the reels 1, 2, 4, and 5 with a replacement power for all the symbols but the Free Spins and Bonus symbol.

If 3 or more Bonuses settle on reels, then the Bonus Game will be triggered. A machine containing different colorful wrestler's masks will be offered. In the beginning, you'll see the masks on the bottom, and if you pick the mask which hides a key, then another row of masks will be unlocked. Besides the key, your award can be a certain amount, added to your balance. With each row, the reward becomes bigger, and on the top, dolls revel prizes up to 100€, even bigger, depending on the number of Bonus symbols which triggered the feature.

Gustavo el Luchador video slot brings excitement, but mostly humor, and once you start playing, you're gonna love this silly guy. He brings many excellent features, in vivid settings, and with incredible animations. And if you meet him, without a doubt, you'll give him all the support he needs.