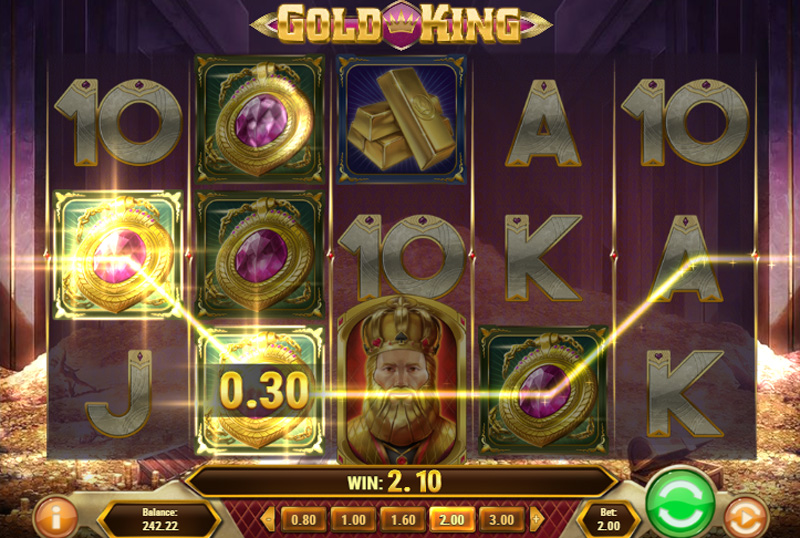 Video slot game inspired by King Midas. Gold King slot has 5 golden reels and
20 paylines. What makes this game so special are its bonus features, which will
make you come back to it over and over again. Play this slot on your desktop or
mobile phone and get some golden prizes you could only dream about.

This slot game looks very rich and luxurious since its
background has a pile of gold coins and there are also many other golden
symbols. For example, playing cards (10 to Ace) are gold-plated, and you will
also see some golden bars, golden jewel, and
crowns. If you like slot games that have a touch of luxury, you will definitely
keep spinning.

The symbol of the highest value is definitely the crown, since
landing 5 of them on the reels will give you 25x your stake. You also need to
pay attention to the rose symbol, because it’s the wild. This means that the
Rose replaces all symbols except the scatter, and landing 5 of these Wild
symbols can bring you 125x your stake. Thanks to the visual and sound effects
that scream “wealth,” you will absolutely feel like a king while playing Gold
King slot.

Spinning
for the Gold

Gold King has few features that are very lucrative and these
are Super Spins, Golden Spin, and Super Stack features.

Super Spins feature will get you awarded with unlimited
amount of
. This is activated when you land the Gold King Scatter on
reels 1, 3 and 5 on the same spin, awarding 10 free spins. If you land 1, 2 or
3 of these symbols while the free spin feature is active, you can gain 2, 4, or
10 extra spins.

This round also offers stacked symbol on each free spin (10,
J, Q, K or A). Valuable symbols such as wilds, golden bars, and amulets also
get stacked in order to form winning combinations.

The Golden Spin feature gets triggered randomly and it
involves each of the reels 1, 3, and 5 containing a super stacked symbol which
is randomly chosen.

The Super Stack feature will also bring you joy since you
have a chance to win 500x your stake. One randomly picked symbol will fill 12
stacked positions on each reel. This will give you an opportunity to land some
serious wins.

King
Midas and the Golden Touch

Although there are many games with a
similar theme like Gold King, this casino slot is unique and special for its
bonus features that will make your head spin. The game is very simple and the
golden details are most definitely easy on the eyes. You will feel the rush and
excitement during the free spins features and the potential payout can go up to
5000x your stake. You probably don’t need a bigger reason to enter this
luxurious slot game and see if your touch can also turn stuff into gold.