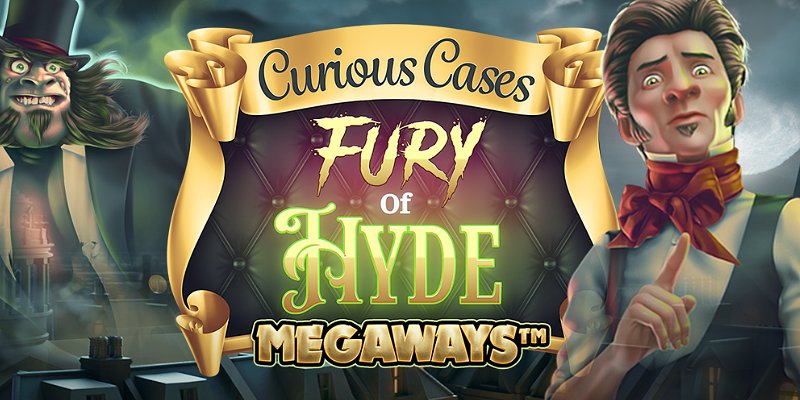 Fury of Hyde Megaways is a new casino slot from Jelly featuring one of the literature's most known characters, the murderous criminal Edward Hyde. It later turns out that Hyde is the same person as Dr. Henry Jekyll, a respected doctor with deep repressed evil urges. Jekyll develops a serum to get rid of his dark side, but he's instead transformed into Hyde. After a while, Jekyll can't control when the transformations happen, and the evil Hyde can turn up at any time.

In this super highly volatile slot, you never know when Hyde is going to visit, either. All you know is that he removes lower-paying symbols and boosts the game's multiplier in this Megaways adventure. Fury of Hyde Megaways is the first game in a series called Curious Cases, developed by Yggdrasil's partner Jelly.

Fury of Hyde Megaways is a video slot from Jelly with 6 reels and changing rows between 2 and 7. There are up to 117649 ways to win, depending on the changing rows, and the volatility is super high. You can place bets between the Min.bet 0.2 and the Max.bet 20. The RTP is 96%, and landing the max win will give you 10000X the bet. The hit frequency of 36.35% awards a win a little more often than on every third spin, on average.

Fury of Hyde Megaways takes place in London in the late 1800s, just as in the original story, written by Robert Louis Stevenson. It's nighttime, and we're looking at church towers and other buildings from above. A yellow light comes from most windows, and the sky is covered in gray clouds or smog. The 6 reels are in the middle of the screen, with an extra horizontal reel above reels 2, 3, 4, and 5.

The symbols on the extra reel belong to the same reels below, and the number of symbols on the regular reels changes between 2 and 7 on each spin. This means that you have between 324 and 117649 ways to win. To make a win, you need to land at least 3 of the same symbols on adjacent reels, starting with the first reel to the left. The game is available on mobile phones and all other sorts of devices.

The lower-paying symbols are well-known in the world of casino slots. They are 9, 10, J, Q, K, and A. The higher-paying ones are a potion bottle, a suitcase with bottles and a syringe, a book and glasses, Dr. Jekyll, and Mr Hyde. The Wild Symbol substitutes all mentioned symbols but not the Scatter. There are also Mystery Symbols, revealing the same kind of symbol after they land.

What is the max win in the slot Fury of Hyde Megaways?

What features are available in the slot Fury of Hyde Megaways?

All Megaways slots have Cascading Wins. Whenever you make a winning combination, the involved symbols will be removed from the screen, while new ones are added from above. If you're able to make a new win, the new winning symbols will vanish while new ones take their place. This goes on as long as you make new wins, and all cascades belong to the same spin.

The Wild Symbol is a gun that only appears on the top tracker above reels 2, 3, 4, and 5. It substitutes all symbols except the Scatter.

The Scatter Symbol is golden, picturing Dr. Jekyll and Mr. Hyde. It appears on the regular reels in the base game and on the extra reel in the free spins. Landing 4, 5, 6, or 7 Scatters anywhere triggers 10, 12, 14, or 16 free spins. The symbol can trigger extra spins in the free spins.

The Mystery Symbol is a pocket watch appearing anywhere on the reels. After Mystery Symbols have landed, they all reveal the same regular paying symbol.

Each time a symbol in the top tracker takes part in a win, it reveals a letter behind it. The hyde Super Spin is triggered when the letters H-Y-D-E are revealed on the four positions. The feature gives the player a free spin where any of the following can happen:

Removed Symbols = Eliminating at least one symbol, starting from the lowest-paying.

Multiplier Increase = A 2X or 3X increase to the win multiplier in the free spins.

A win multiplier is added to the Free Spins. It starts at 1X and increases by 1 on every cascade. The Hyde Super Spin can be triggered during the free spins, awarding an extra spin. Any increase of the multiplier or minimum number of Megaways stays for the rest of the feature. The free spins continue until the player runs out of spins.

Although the games have several similarities, Fury of Hyde Megaways shouldn't be mixed up with Pragmatic Play's Fury of Odin Megaways. The powerful Norse god has been replaced with the even less predictable Mr. Hyde, who can treat the player with a boosted free spin at any time. Both games also have an unlimited win multiplier in the free spins, which can be improved even more by Mr. Hyde.

Both games also have Mystery Symbols, which don't add that much to the game, although it can be pretty exciting just before they're revealed when many symbols land on the same spin. The graphics in Fury of Hyde are great, and we're curious about the next stories in the Curious Cases series. It seems like Jelly is working on a similar series as iSoftbet's Twisted Tales, with games such as Moriarty Megaways and Merlin's Revenge Megaways.

The game's RTP of 96% is about average for a Megaways slot, and the hit frequency of 36.35% means that there will be quite a lot of wins. Remeber that the hit frequency is on average, though, and the wins can differ greatly between players because of the super high volatility. You might win or lose big in a short time.

Fury of Hyde Megaways from Jelly lets the player meet Dr. Jekyll and Mr. Hyde in an unpredictable adventure where you never know if the good or bad character will show up.