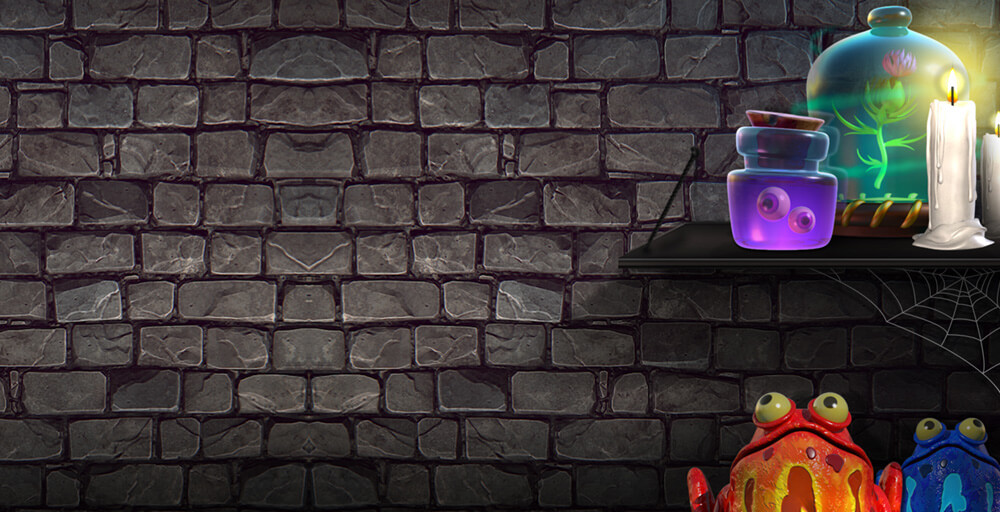 If you like witches and their world
full of different concoctions, strange rituals, and
magic, then try playing the Frog Grog slot. Take a peek inside and you will get
to see the inside of a cauldron with
boiling liquid. Surrounded with potions, a heart in a jar, and the wild frog,
you will get hooked on this slot with 5 reels and 23 paylines, developed by

Entering the Frog Grog slot, you will
notice a perfectly lined witchcraft
equipment. You will glance at witch's hat in the corner and a book of spells, which means she's just getting
ready to make some magic. Stick around and experience enchantment from up
close. There will be some vanishing and appearing stuff from the cauldron, but nothing too dangerous for sure. So, stay nearby and experience adventure.

MAGIC ABOUT
TO HAPPEN

The Frog Grog will take you to a
witch's hut, full of magical ingredients for every misfortune that has befallen
you. In the hut, you will find the cauldron, boiling with strange, golden
substance and a lot of interesting items, like the heart in the jar. You will
also discover one human skull and a skull belonging to an animal.

The strange colored liquids will mysteriously fly away into the cauldron and
make some strong potions. There, you will reveal some Moths in a square-shaped,
transparent box with some other bottled
items. As you look around, waiting for the witch to come, you should focus on
the fascinating sound playing in the room. At some point, you will be able to
hear a wicked laugh in the distance, but don't be alarmed, you are safe.
Probably.

Everything in this room has a
purple-golden glow emanating from the items, building up to this magical
adventure. As the symbols land to form the win lines, the liquid will start
boiling with points resurfacing from the cauldron, and when a Mystery Game
feature is unlocked, the cauldron will start to flush out some blue mist,
making the room even more enchanting.

The style in which bottles and other
items fall onto the shelves gives a special note and when you get to unlock
some features with flying objects, it really looks great. The Wild symbol
transformation, from orange to blue frog, is very entertaining as well.

The witch's hut is full of surprises, great animations, and magical music, and undoubtedly worth visiting.
So, don't hesitate to enter this mystical
room and hopefully, you'll get to keep
your heart.

When the symbols form into paylines and get to vanish, the other symbols will replace them. With each further win,
the multiplier will increase.

If the orange frog lands on the
reels, she will croak, and destroy every symbol right, left, up and down,
helping you win even more. The frog will also become blue and wild, and it'll
be able to replace any other symbols.

The Mystery Game feature will be
activated randomly with symbols flying from the reels into the cauldron with
blue mist inside. Every symbol except the Moth, the Flower, and the Frog will fly into the cauldron. When the Mystery Game is finished,
and some coins are earned, with returning to the regular game, the multiplier will be amplified for the first
spin.

GET YOUR OWN
CAULDRON & MAKE SOME POTIONS

, featuring
a popular witchcraft theme, has some very creative animations and features.
Lively colors and awesome graphics give
you a sensation as if the witch is about to pop out of the corner. Music
creates a sensation of anticipation and excitement while the game makes you
wonder if you're going to keep all your organs intact by the end of it all.

There are some nice features, like
always present multiplier. Even though
there is no scatter symbol, the wild symbol compensates for this with its special
side effects. There is also the Mystery Game which unlocks randomly, with great
design, making your experience even more special.