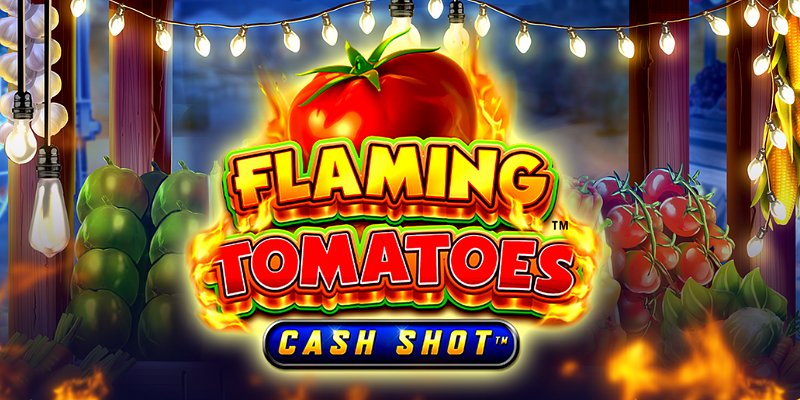 Flaming Tomatoes: Cash Shot is a new casino slot from Light & Wonder where tomatoes on fire can create wins up to 5000X the bet. The tomatoes trigger a respins feature whenever you land three or more, giving you various chances of collecting more. You might be surprised that tomatoes can treat you so sweet, but bear in mind that they’re actually berries. Another cool thing is that the tomatoes don’t have to be on a payline to award winnings. Land at least three of them anywhere, and you’ll be rewarded.

When dealing with burning tomatoes, you can avoid getting burned by using the features Wild Symbol, Tomato Symbol, Tomato Respins, Free Spins, and Bonus Buy.

We have ended up at a farmers’ market full of stands with vegetables and fruits. In the middle of the screen is a stand with corn and garlic hanging on the sides, with grapes, carrots, and other plants in front of it. The five dark green reels are in the middle, showing plants and royal symbols. To the left of the reels is a blackboard displaying the prizes for collecting tomatoes, with the top prize of 5000X the bet. You make wins by landing at least 3 of the same symbols on a payline, starting on the first reel to the left. The game is available on mobile phones and other devices.

The lower-paying symbols are 10, J, Q, K, and A. They will award you between 2X and 5X the bet for a 5-of-a-kind win. The higher-paying symbols are carrot, corn, broccoli, cauliflower, and potato. Landing 5 of those on a payline awards between 7.50X and 20X the bet. The Wild Symbol substitutes all symbols except the Bonus Scatter Symbol and the Tomato.

What is the max win in the slot Flaming Tomatoes: Cash Shot?

What features are available in the slot Flaming Tomatoes: Cash Shot?

The Wild Symbol appears everywhere except on the first reel. It substitutes all regular paying symbols, but not the Scatter or Tomato.

The Tomato doesn’t award wins on paylines like regular symbols. Instead, it triggers the Tomato Respins, awarding between 2X and 5000X the bet whenever you land 3 or more anywhere on the reels.

The tomatoes that trigger the respins are held in their positions while the rest of the reels spin. You can only land blanks or more tomatoes on each position in the respins. If you land a tomato on at least one position in the respins, it will also be locked in place, and you’re awarded one more spin. This continues until you don’t land any more tomatoes or until all 15 positions are filled. You’re awarded a cash prize depending on the number of tomatoes when the feature ends, no matter where they are positioned.

It’s not possible to trigger the Tomato Respins and the Free Spins at the same time.

When no new winning symbol lands, the respins are over, and you’re awarded the winnings of the symbol just like usual, paying for one or several paylines. The average win in the free spins is 46.47X the bet.

The Free Spins are for sale for 50X the bet. The RTP of the feature is 95.96%, a tiny bit higher than the game’s regular RTP.

Who would have thought that a visit to the vegetable market could be so exciting? No one has probably ever loved carrots and cauliflower as much as now. Best of all are the tomatoes that trigger respins whenever 3 or more show up, and you don’t have to worry about landing them on a payline. They pay according to the scoreboard to the left, giving you up to 5000X the bet. That is also the game’s max win, which is a solid number for a slot with medium volatility.

The free spins are also sweet, triggering respins whenever you make a winning combination, opening up for more winning symbols to hit the screen. The feature feels pretty volatile in comparison to the base game, and we managed to land some really sweet wins. You only get 5 spins that can’t be retriggered, so you might also end up with just some small winnings.

Fruits are super popular in the slot world, while other plants aren’t as common. Although the tomato is a berry, most people don’t see it as a fruit but rather as a vegetable. Tomatoes originate from Latin America, just like another popular casino plant, the chili pepper. If you want something even spicier than burning tomatoes, you can have a look at Hot Chilliways or Chilli Heat.

Flaming Tomatoes: Cash Shot has burning tomatoes awarding wins no matter where they land, giving the player up to 5000X the bet.