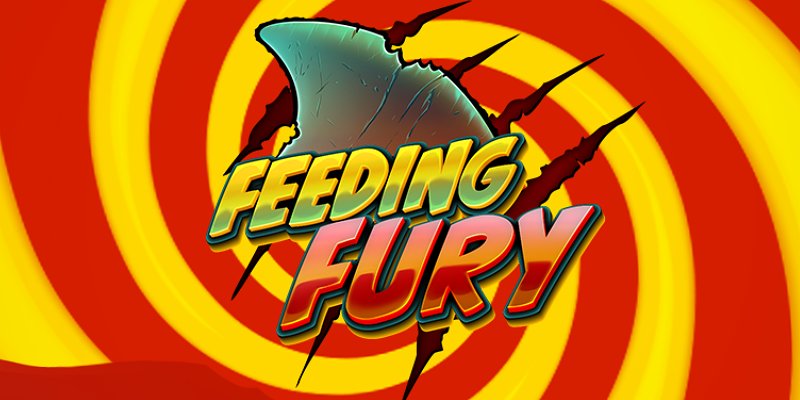 Feeding Fury is a new casino slot from Iron Dog Studio with lethal sharks killing everything that comes their way. There’s a wild brown shark that can appear on any spin in the Shark Attack, eating other symbols on the screen while reproducing itself in their positions. In the Feed or Die Bonus Game, you’ll get to know the even deadlier Collector Shark, who looks like a great white shark that has eaten way too much. It’s time to take a dip in dangerous waters.

In the waters of dead and alive sea creatures await the features Wild Symbol, Shark Attack, and Feed or Die Bonus Game.

Feeding Fury has fish and other underwater creatures looking like they’re taken straight from a cartoon. They are all animated in round shapes, which makes the sharks look more like fish with a pointy fin than the lethal creatures they actually are. Don’t get fooled, though, because these rather cute predators eat everything that comes their way except crabs. The transparent reels have a brown frame, and sea plants are growing next to them. You make wins by landing 3 or more symbols on any of the 10 paylines, starting on the first reel to the left. The game is available on mobile phones and other devices.

The lower-paying symbols are 10, J, Q, K, and A. They award between 2X and 2.5X the bet for a winning combination of 5 symbols. The higher-paying symbols are a yellow fish, a blowfish, a piranha, a whale, and a red octopus. They will add between 3X and 10X the bet to your account for a 5-of-a-kind win. The brown shark is the Wild Symbol, substituting all mentioned symbols, but not the Scatter Symbol or the Special Symbols in the Feed or Die Bonus Game.

What is the max win in the slot Feeding Fury?

What features are available in the slot Feeding Fury?

The features are Wild Symbol, Shark Attack, and Feed or Die Bonus Game.

The Wild Symbol is a round brown shark with a frowning forehead. It substitutes all regular paying symbols and is also the best-paying symbol on its own, awarding 15X the bet for a 5-of-a-kind win.

The Shark Attack can trigger randomly on any spin. The Wild Symbol will eat all symbols to its left, leaving Wilds in their positions. If several Wilds land and a Wild swims over an existing Wild, it will increase the multiplier of the current Wild.

The Feed or Die Bonus Game has a collector shark in the middle of the grid from the start of the feature. It’s a great white shark, animated in the same round way as the other symbols, and it eats all the fish that land on the reels, awarding a cash prize for each fish. You start the game with 3, 4, or 5 lives, depending on if you triggered it with 3, 4, or 5 Scatter Symbols, and you’ll lose a life on every spin where no fish lands.

The Feed or Die Bonus Game has 3 levels, and you level up by earning enough points from the fish.

Level 2 = The collector shark increases to a 2x2 symbol, and a multiplier of 2X is awarded to all values the shark collects.

Level 3 = The collector shark grows to a 3x2 symbol, and the multiplier increases to 5X. Level 3 also unlocks a Hammer Shark Symbol, which adds 2 to the multiplier whenever it’s eaten.

The Feed or Die Bonus Game continues until all lives are lost, or until the max win of 5434X the bet is reached.

Get ready for some bloody action as soon as you tip your toes in the big fish bowl of Feeding Fury. You never know when the Wild Shark will turn up eating every fish to the left. For every fish it eats, another Wild Symbol replaces the dead fish, raising the odds of scoring big wins. If the Wild passes another shark, it gives it a multiplier.

Triggering the Feed or Die Bonus Game will introduce you to an even deadlier shark, eating every single fish that lands. Eating fish will also make the Collector Shark grow when it levels up to 2x2 and 3x2. The bigger the shark, the bigger the multiplier, which can grow up to 5X.

The game’s RTP of 96.11% is about average in the slot world, and the max win of 5434X the bet is okay considering the mid-high volatility. For a chance to win even more money, you can check out the smash hit Razor Shark, with an infinite max win and a reported win of over 85,000X the bet. A little less crazy but still deadly is Mega Don, where you can score up to 10000X the bet.