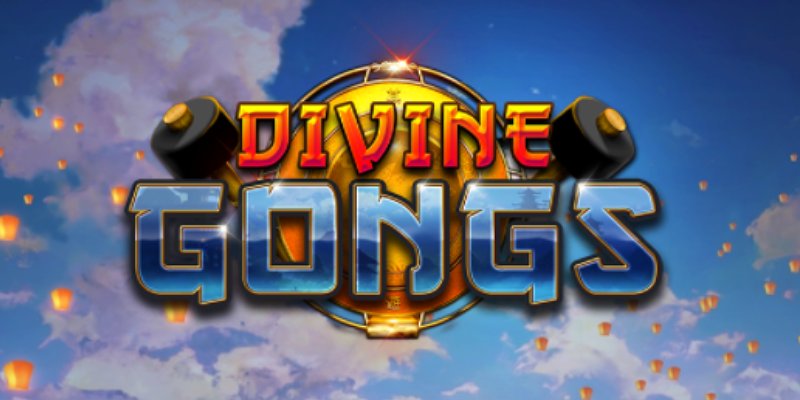 Divine Gongs is a new casino slot from Kalamba Games with Asian gongs that can give the player riches of up to 10000X the bet. A gong is a flat circular metal disk most often struck with a mallet. There are records of the instrument from sixth-century China, and it has been used in the Western World since the 18th century. When you hit the metal discs in Divine Gongs, you can trigger a respin feature with prize boosters and even duo reels, duplicating the entire grid.

Divine Gongs takes place on a green field with white flowers and a couple of cute rabbits hanging out. In the background are tall mountains with East-Asian houses. The music has an oriental touch with flutes and string instruments. There’s, of course, also a sound of a ringing gong every time the symbol lands. Landing 3 or more of the regular symbols on the same payline, starting from the first reel to the left, awards a win. The game is available on mobile phones and other devices.

What is the max win in the slot Divine Gongs?

What features are available in the slot Divine Gongs?

The Wild Symbol is a golden rabbit. It substitutes all symbols except the gongs.

The K-Cash Gong Symbol comes in three colors and has a cash value between 0.5X and 50X the bet. Landing 3 or more anywhere on the grid triggers the K-Cash Respins with 3 initial spins. Each color represents a feature in the respins, and the symbols are also collected in one of the K-Cash Accumulators every time they land.

The K-Cash Accumulators are three circles to the left of the reels, in the same colors as the gongs. They start at 0% and increase every time you land a gong with the corresponding color. The values for each Accumulator can reach a maximum of 200%, and they will not grow more if new gongs land. The values are applied to the sum of the collected K-Cash values at the end of the respins.

Purple K-Cash Symbol = Up One: The initial number of spins is increased by 1.

Red K-Cash Symbol = Duo Reels: This feature gives you a second reel setup. You play the respins on two independent grids, and the starting position for the second grid is copied from the first one. Resetting spins work independently, so you can finish one grid and still play on the other one.

The K-Cash Respins continue until the player runs out of spins or until all positions are filled. Filling all 15 positions awards the K-Cash Bonus of 100X the bet if the feature was triggered by K-Cash Symbols and 500X the bet if the feature was purchased in the Bonus Buy feature. When the cash value of all symbols is collected, the K-Cash Accumulators will give you some extra money for each symbol of the respective color.

Kalamba Games has used K-Cash Symbols in many games and so even in Divine Gongs. The symbol is used differently in different titles, though, and it’s quite different in this game compared to Finnegan’s Formula, where it can increase the rows from 4 to 6, giving the player 7776 ways to win instead of the initial 1024. The godly K-Cash Symbols of Divine Gongs are more similar to the ones in Fruitmax Cashlinez, which also triggers a respins feature where the spins are reset every time a new symbol lands.

The respins are loaded with 3 features that help you in the hunt for big wins. The Up One will prolong your spinning session with an extra spin, which can become extremely valuable. The Prize Booster can increase the value of any symbol on any spin, and the Duo Reels are, of course, the best of all features, giving you another grid and the possibility to land 30 instead of 15 K-Cash Symbols. Triggering the respins with all 3 features grants an exciting ride, which is quite obvious considering that Bonus Buy costs 395X the bet.

Divine Gongs’ RTP of 96.39% is considered good, above the industry standard. The Bonus Buy features have an even higher RTP, reaching 96.71% if you pay 395X the bet. The max win of 10000X the bet is also considered solid for a game with mid/high volatility.

Divine Gongs from Kalamba Games is a Chinese-inspired casino slot where godly gongs can give you up to 10000X the bet in a respins feature.